Women Are Assholes To Men – Why?

At 40 years old, he was still single and girlfriend-less. He was just plain unsuccessful with women no matter what he tried.

When he came to me for help, he told me one sob story after another. He told me about…

“Why are women so mean to men?” Adam asked out aloud in sheer frustration.

Why Women Can Be So Rude To Us

“Derek, I don’t ask for a lot. I just want a woman who loves me back, respects me, and never cheat on me. Instead, here I am… a 40-year-old virgin. Pathetic, right?”

“Adam, I’ve had clients in their 50’s who came to me with the exact same problem as you.”

“Wow,” he said, suddenly feeling better. “How did you help them? How did they make women start treating them with respect?”

In this Shogun Method guide, you’re about to learn what Adam learned that day…

…and how understanding relationships and how they really work changed his love life FOREVER. And for the BETTER.

And if you, too, have been treated badly by women all your life…

…then this may be the most important article you’ll ever read.

(And we’ll see what happened to Adam later.)

READ ALSO: How To Deal With A Negative Spouse

Let’s start by going back to the question:

Why Are Women So Mean to Men?

Are women REALLY mean to men?

After all, I’m sure you know that there are girlfriends and wives out there who are:

Likewise, in the social context, I’m sure you know some women who:

So, what’s the deal here?

Why are women so nice to other men… but not to you?

Here’s the painful fact of the matter:

Women are only mean to men they don’t respect.

This means that if she’s being mean to you, then she probably doesn’t respect you. 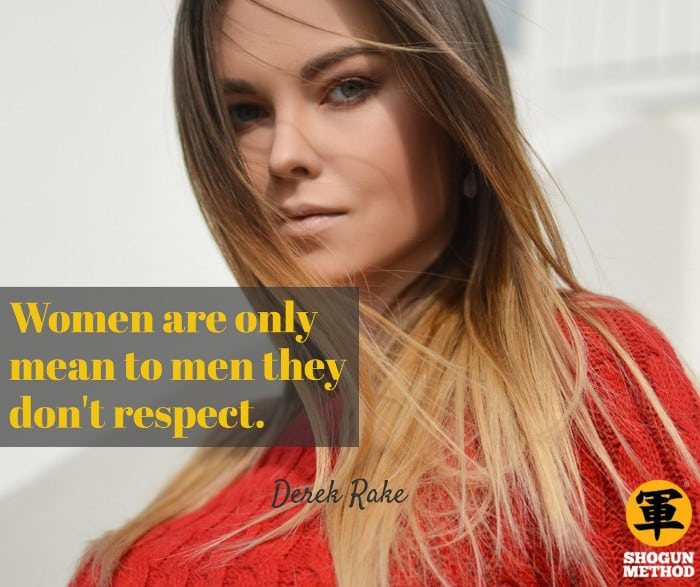 And it gets worse…

When a woman can’t respect you, she can’t love you.

Makes lots of sense it you think about it.

So, what’s the biggest trait of a man that women simply can NOT respect?

Is weakness the reason behind your lack of success with women?

Let’s find out next… keep reading!

READ ALSO: How To Be A Player

Signs She Disrespects You

Answer honestly: how many of the following traits apply to you?

If you have any of the traits above, then you’ll know why your woman finds it hard to respect you. And so, she’ll have problems loving you.

How To Make Women Respect You

Want women to respect you?

Simple. Become a man they CAN respect.

You’ll need to be:

Two Ways To Get A Woman To Respect You

Now, there are two ways to gain those traits become a man women can respect.

The first way is the slow way – or the PUA (Pickup Artist) way.

Basically, you can follow pages upon pages of Pickup Artist advice to:

Now don’t get me wrong… PUA does work (sometimes… because many women are already aware of these tricks). But here’s the kicker…

The PUA way can take you YEARS… but you’ll get there (maybe). And when you do eventually become a guy your woman can respect, she’ll start treating you well.

But who has that kind of time to spare, right?

If you want quick results (the kind where you’ll get in as fast as ONE WEEK) then take the second way – the EXPRESS way.

The fast way is by using a Shogun Method principle that will MANIPULATE a woman’s mind.

Yes, we are talking about MANIPULATION here.

To be more specific… you’ll manipulate her into seeing you as the strongest, most dominant man she’s ever met in her life.

…then don’t worry. It’s the natural, knee-jerk retort of men who grew up as “nice guys.”

But you’re about to understand why learning to manipulate women is a must. It’s NECESSARY. And it’s completely NON-NEGOTIABLE.

Let me explain why…

Why You MUST Manipulate Women (To Win Them Over)

The problem with nice guys is that they NEVER manipulate women.

In fact, the opposite happens….

If you’re a nice guy, then women have probably manipulated you countless times already by doing these things…

Don’t feel bad. Every man has been played by women in one way or the other. It’s not your fault at all.

Here’s what you MUST know from now…

If you want women to start respecting you FAST, then you must learn to manipulate them.

Now, despite what you now know, and if you STILL don’t want to manipulate women, then guess what? That’s okay.

There’s always that Pickup Artist way for slowpokes. If that’s your choice, you can stop reading this article and get started. You got years of work ahead of you, so better get moving!

Alternatively, if you want to do the smart thing and learn about how to manipulate women (as Adam did), then keep reading.

What you’re about to learn will change your life, as it did Adam’s and hundreds of others’…

READ ALSO: How To Deal With A Drama Queen

How To Manipulate Women

Think of those women you once liked or dated, but were mean to you. Who are they with now?

You might notice that many of them probably ended up with men who treated them badly.

But why were they mean to YOU? And why did they fall in love with assholes who were mean to THEM?

They can’t help it.

Seriously. They just can’t. They are not wired that way.

Deadly Flaws In The Female Mind

Here’s why women can’t control how they behave…

The female mind has certain weaknesses. These flaws leave women vulnerable to exploitation (especially by guys who know Shogun Method).

The biggest flaw in the female psychology is this:

She can’t choose who to fall in love with.

This explains a lot of things about female behavior if you think about it.

For example, a woman will probably be mean to a husband who is stable, gentle, and loving.

On the other hand, she’ll be completely subservient to someone who treats her like shit… because she has fallen in love with him.

How To Make A Woman Fall In Love With You

Since a woman can’t choose who to fall in love with it, guess what?

You can pretty much “force” a woman to fall in love with you… as long as you know what to do.

A woman is hard-wired to fall in love with the man who makes her feel the most intense emotions… good AND bad.

That’s why women love jerks – it’s an emotional rollercoaster for them.

Jerks (or “bad boys”) make a woman completely ecstatic one moment… only to fuck shit up for her the next.

And that’s why they are so emotionally addictive.

On the other hand, this also explains why women don’t dig nice guys…

Because with nice guys, it’s all nice feelings. It’s nice at first, but it becomes boring real fast.

And since women can’t respect a man they find boring… you know what happens next.

So, if you want women to stop being mean to you… then use the EXPRESS way.

Learn to manipulate them.

And the fastest way to do that is with the same technique I taught Adam the day I met him.

That technique is called “Fractionation”.

How To Use Fractionation To Manipulate Women

At its core, Fractionation is a storytelling technique.

Using this technique, you’ll do the following:

Fractionation is everywhere if you look closely at what’s around you. It’s widely used by hypnotists, public speakers, and salespeople… not to mention politicians and religious leaders.

When used in dating, Fractionation has the following effects on a woman:

And the best part – since it only involves storytelling, this means that ANY guy can learn it.

After learning it from me, Adam eagerly tried it out. He started meeting women and used Fractionation on them.

The results shocked him:

Last we talked, Adam told me he was seeing – and BEING COURTED BY – three different women. He told me he liked them all but couldn’t decide between the three.

But then he told me:

“Considering what my love life used to be like, this is a GREAT problem to have!”

And guess what? Now, it’s your turn.

Would you like women to stop treating you badly?

Would you like to start having the same kind of “good problems” Adam has?

Then, do this smart thing: Learn Fractionation TODAY.

All you have to do is to join my Online Masterclass below:

Click on that link. A new page then appears. Enter your email address so that I can send you your own Invite to the Masterclass.

(Not everyone qualifies. You’ll only receive an Invite if you do. Thank you for understanding.)

And there are two ways to become a man women can’t help but respect: The slow way, and the fast way.

Do the smart thing: don’t waste YEARS gaining the respect you deserve… when you can take JUST ONE DAY.

Today is that day. Watch my Online Masterclass – click here.