Have you ever felt “used” by a woman?

Or worse… are you dating a woman who’s just “using” you RIGHT NOW?

A good percentage of Shogun Method clients come to me BECAUSE of this particular problem.

For some reason, they find themselves dating a woman who seems to be “using” them.

Using them for what? Many reasons! The five most common reasons a woman would use you for are below…

Why She Uses You – Five Reasons

And whatever it is she wants from you, she’ll do nasty, sneaky things to get it:

How She Uses You – Ten Ways

But here’s the worst part…

You’re never sure if she’s just using you.

On one side, you love her, and you think it’s normal for couples to “use” each other sometimes…

…but at the same time, you have the nagging feeling she’s getting too needy and entitled.

What should you do?

That’s what this Shogun Method guide will show you the light.

You’re about to learn if your woman really IS using you… and what to do if she is.

Signs She Is Playing You (The “Is She Using Me” Quiz)

Quick recap: here are the five most common reasons your woman would use you would be the following:

Here are the signs to watch out for…

Is She Using Me For Money?

Is She Using Me For Attention?

Is She Using Me To Get Over Her Ex?

She’s using you as a temporary replacement if –

Is She Using Me For Emotional Support?

She’s using you to get emotional support if –

Is She Using Me To Get Back At Her Ex?

She’s using you to get back at her ex if –

If you see any of the above signs in your own relationship, then I have some bad news for you…

You might really love her, but she’s really just using you.

Sorry, buddy. That sounds rather harsh, and yet it’s true.

And here’s what’s even worse:

You can’t fix the problem using the “conventional” solutions:

So, if your woman is using you, is it really a lose-lose situation?

Not if you use the unconventional technique you’re about to learn from me next.

If you feel your woman is using you, but you still want to keep her, then here’s what you MUST do…

READ ALSO: How To Train Your Wife

How To Make Her Stop Using You

Time for some tough love. 🙂

Here’s the root cause of why she’s getting away with using you:

You’re a pushover. You’re easily manipulated. You’re someone she can control.

…and start seeing you as a guy she truly, madly, deeply LOVES.

How do you do all that?

Not by force, by the way. Instead, you dominate her MENTALLY and EMOTIONALLY.

You stop her addiction to what she’s getting from you…

…and get her addicted to YOU.

And you do that with a technique called Fractionation. 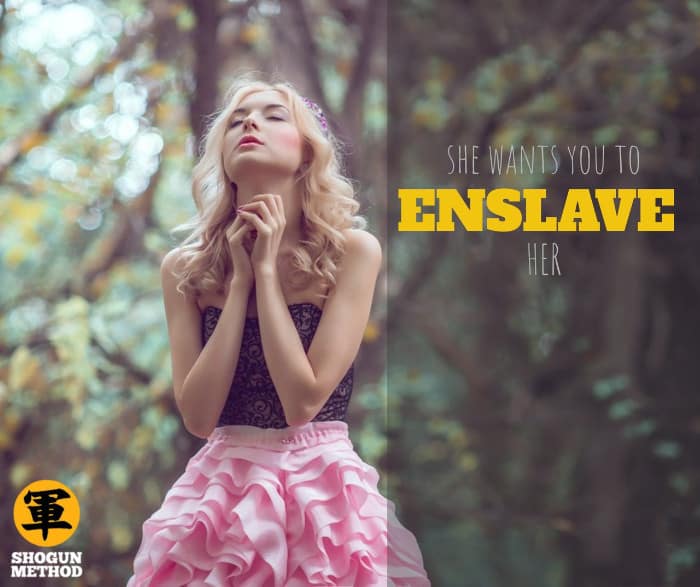 Here’s how it works and how to use it… continue reading!

How To Control And Dominate A Woman (With Fractionation)

Fractionation is a psychological manipulation technique that uses storytelling. It makes the person on the receiving end feel intensifying cycles of pressure and relief.

In other words, Fractionation will put your woman on an emotional rollercoaster.

Fractionation has been used for centuries…

And guess what? It’s Fractionation that’s going to make her stop using you, and instead feel HOPELESSLY IN LOVE with you.

Fractionation Powers Up The Shogun Method

In the cases of my Shogun Method clients who are being used by their women, I tell them to:

(That’s Fractionation in action: you put her on an emotional rollercoaster.)

At that point, the woman usually does one of two things:

See? With Fractionation, you turn a lose-lose situation into a win-win!

Guess what? When you do get to keep her, you don’t stop there.

Instead, you keep using Fractionation to build your dominance over her. Remember to keep striking while the iron is hot!

You can use the same pressure-relief-pressure process to:

And you don’t stop until she is emotionally enslaved to you.

(This is also how Shogun Method is different from the others. We teach ENSLAVEMENT, not “seduction”.)

My Shogun Method clients have been using this simple formula for years. The results are miraculous, believe me.

…into docile, respectful, happy and 100% submissive girlfriends and wives.

If you, too, are stuck in a relationship with a woman who’s using you…

…then two can play that game. You, too, can “use” her back – and create a stronger, happier, healthier relationship at the same time.

But you MUST learn Fractionation to do it. It’s the key.

Do the smart thing and learn Fractionation TODAY.

Sign up for my Online Masterclass by clicking on this link:

In the Masterclass, you’ll learn:

In the end, just remember that if your woman is just using you…

…then you’re in a purely functional relationship. And it’s not going to last.

Unless, of course, you stop the bullshit and dominate the relationship like you’re supposed to.

And if you want to keep her at the same time, then you already know what you need.

Look – it’ll be crazy to wait until she uses you up and gets away. Learn Fractionation now!

P.S: Is your woman using you? Then, let me sort you out. Leave me a message below and I will reply personally.