“My Wife Is Always Angry And Unhappy. What Should I Do?”

Thomas, a 30-something husband I met at a recent book convention, asked me this question.

He had heard of Shogun Method before, and when he found out I was coming to town, he came to see me.

So I sat him down at a cafe down the nearby mall where he told me his story.

Poor Thomas was having severe bouts of depression because of his wife, Elma. One “firecracker of a woman” (that was how he described her), she would get mad at him even though at things that are clearly not his fault, like:

And whenever Thomas tried to pacify her, she’d shoot his efforts down.

She’d call them his “pathetic attempts at making up.” Not even kidding here.

And then, things got worse.

“My Wife Is Always Angry”

“Nope,” Thomas said somberly, getting his phone and dialing Elma’s number. “Watch this…”

“Hey hon,” Thomas said brightly. “I’m at the mall. Want me to get dinner?”

“No, that’s not what I…” Thomas stammered. Clearly, Elma was angry about something.

Then a full minute passed with Thomas just listening. I couldn’t make out what Elma was yelling about, but her voice was loud enough for me to hear.

He put his phone back in his pocket, then looked at me in exasperation. “Why do I even fucking bother?” he spat.

At that point, I knew I HAD to help Thomas.

READ ALSO: How To Get A Submissive Wife

We’ll come back to Thomas in a while. Now, let’s talk about YOU.

If you’re reading this, then you likely have the same problem with your wife:

If any of that sounds familiar… then guess what?

Let’s fix the problem TODAY, once and for all.

Sounds good to you?

Great. Then, be sure to read all the way to the end of this guide. It’ll change your life (for the better) FOREVER.

So, let’s get started, alright?

She’s Not Angry About What You Did

Here’s the thing about women that you must understand –

“A Woman’s Complaint Is Content-Free”

I got this priceless piece of truth from David Deida, the author of Way of the Superior Man. It’s a pretty good book.

To save you from having to read all 459 pages of it, the book can be summarized into these three points:

I know what you’re thinking now. What does all that have to do with dealing with angry wife, right?

If your wife is angry at you, it’s not because the things you DO, but with WHO you are.

Re-read that again if you need to… because it’s really important.

It’s all about who you ARE, and not what you DO that makes her angry.

She’s Angry At You For Failing Her Tests

Your wife will always test you. She does this so that your “masculinity” stays on track.

And her “tests” will come in various nefarious forms:

And when you react by getting emotional…

Or, when you tolerate her behavior…

Or, when you give in to what she wants…

… then, guess what? You FAIL the test.

Don’t feel bad. It’s not your fault at all.

You don’t know that you’re being tested, right?

Most guys DON’T know they’re getting TESTED all the time.

And as a result, they FAIL their wives’ tests over and over. And the relationship goes into a downward spiral.

How To Pass A Woman’s Tests

Meanwhile, there are some guys out there who DO know about this.

These are the husbands who actually THRIVE in their wives’ tests. They know EXACTLY what to do… and they pass the tests with flying colors.

And as a result, their relationships are strong and healthy. Their wives are satisfied and happy. And raising their households and families seem almost effortless.

When you know how to deal with an angry wife, she’ll become less and less angry over time.

And as a direct result, her tests decrease in frequency and intensity over time, as well.

Now, what does all this mind-blowing information tell you?

It should tell you this: If your wife is angry, it’s NOT because of something you said or did.

Instead, she’s angry for one reason. She’s angry because you’re getting WEAK.

Nothing stresses a woman out more than being tied to a weak man.

So you’ll need to change that. FAST.

So how do you deal with an angry wife?

That’s actually the second part of the problem. There’s a right and wrong way of “dealing” with an angry wife… and guess what? Most guys do it WRONG!

Read Also: How to Rebuild Trust In A Marriage

How To Calm An Angry Wife – The WRONG Way

What’s the fastest and easiest way to calm an angry wife?

This: give in to what she says she wants.

By now, you already know that’s just a recipe for DISASTER.

And that’s precisely the problem with “dealing” with an angry wife. It’s a Band-Aid solution to one of the biggest, most fundamental marriage problems.

It’s like trying to put out a wildfire with a squirt gun.

Instead, go to the root of the problem. Become what a wife REALLY needs – a strong, dominant husband she can count on for the rest of her life.

And this is a hard pill for nice guys to swallow.

…ESPECIALLY when she’s giving you one of her tests.

She Wants You To Dominate Her

But you know what? It’s not cruel. It’s biological. It’s how Mother Nature herself designed biological creatures to be trained.

She wants you to dominate her.

Think about it. How do you train something or someone to follow your lead?

Answer: You train them by correcting what they’re doing wrong. And most times, that involves inflicting emotional stress:

Learning how to be dominant with women is absolutely crucial!

How To Handle Your Wife – Use Mind Control On Her

Long story short: I taught Thomas how to use Mind Control on Elma.

Specifically, Thomas learned how to use a Mind Control Enslavement technique known as “Fractionation” on her. 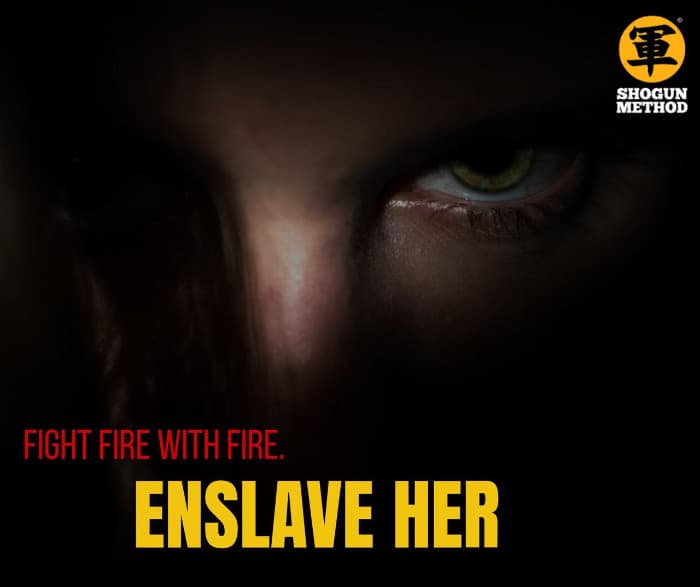 Fractionation is a technique that puts your wife on an emotional rollercoaster. It “tricks” her mind into developing an emotional addiction to you, and as a result, make her subservient to you.

And here’s how Thomas used Fractionation on his wife Elma:

That was the “turning point” where the power in the relationship shifted to Thomas.

Over the next few weeks, Thomas established his dominance over Elma little by little. He didn’t do it by force, because Fractionation only required him to use words.

But it did the trick anyway.

Thomas soon wrote me an e-mail telling me how shocked he was by the results.

Elma had done a complete turnaround. She was almost never angry anymore.

Instead, she had become:

That’s the power of Fractionation.

And you know what? If it works for Thomas, it will work for you. So, now it’s your turn!

…then I STRONGLY suggest you learn Fractionation. And FAST.

Guess what? I can take you by the hand and show you how it’s done.

(Not everyone qualifies. If you do, you’ll receive a special Invite to the Masterclass via email.)

There’s only ONE way to make your angry wife happy again.

And that’s to become the strong, dominant leader she needs you to be… right now.

Take that important first step: learn Fractionation, use it on her and make her respect you again! Click here.

PS: Leave your questions and comments below and I’ll answer them personally.