Steps To Rebuilding Trust In A Relationship

Ever got cheated on by your current wife or girlfriend?

Truly, it’s one of the most painful things a guy could ever experience.

You love a woman, treat her well, work hard to meet her every need…

…but in the end, she betrays your trust by sleeping with another man.

How To Rebuild Trust After Being Lied To (And Cheated On)

Being cheated on was the problem of a good number of Shogun Method clients.

They all came to me for help, asking me for the right thing to do next.

And one of them was Lenny. Here’s his story…

For more than 25 years, he busted his ass for his wife and kids.

He had put in 12-hour shifts to put his kids through college and his wife, Fiona, through drama school. He worked hard. Real hard.

He (rightly) thought he was doing things right….

…until he received a naughty text from Fiona that was intended for another man.

To his tremendous shock, it turned out to be a text for a young actor she was having a secret affair with.

Fiona immediately came clean and confessed, but the damage had been done…

While Lenny accepted her back, he was so hurt and confused that he came to me for advice.

“I hate what she did,” Lenny sobbed to me.

“She has already apologized and promised to call off the affair. But I don’t trust her anymore. I can’t trust her. Is she the bad one here, or is it me?”

“Maybe it’s my fault,” Lenny continued. “Maybe I didn’t work hard enough. Maybe I didn’t treat her well enough. Is it wrong for me not to trust her anymore? What should I do, Derek?”

READ ALSO: How To Save A Marriage

If you feel the same way about YOUR relationship, then I’ll tell you what I told Lenny that day:

“It’s human nature to feel distrustful of those who deceive you. It’s biological. We can’t help it.”

And then I snapped him back to reality.

“But trust IS essential in any relationship,” I told him.

“If you want to keep her and save your relationship, you WILL need to rebuild the trust.”

“Without trust, your relationship will fail in the end, even if she never cheats on you again.”

“But how can I trust her again, Derek? It sounds impossible.”

I smiled and told him: “Not if you build the RIGHT kind of trust.”

How To Rebuild Trust In A Relationship

Once a cheater, always a cheater.

If your wife or girlfriend cheated on you before, chances are she’ll cheat on you again. Sorry man, but that’s the truth.

…is to simply make sure she NEVER cheats on you again.

Before you say, “But Derek, that’s not trust!”, let me give you Lesson #1 for this article…

Not all kinds of trust are the same.

In fact, there are three “levels” of trust in human relationships:

READ ALSO: How To Mend A Broken Heart

#1: The “Institution” level of trust.

This is the most basic kind of trust, and it’s enforced by rules, social norms, and expectations.

For example: The basic trust between couples. They “trust” each other to follow the rules and norms for exclusive relationships.

#2: The “Recognition” level of trust.

This is a stronger form of trust than the “institution” level. “Recognition” means you trust someone because you’ve seen their character and track record.

For example: Over the years, you and your wife have proven to be loyal to each other. Then you share a “recognition” level of trust, and it’s stronger than marriage vows or societal pressure.

This is the strongest form of trust of all. It’s when you totally, completely trust a person, regardless of what they say or do.

It’s a form of “Emotional Enslavement,” you could say. And it’s more common than you think.

If you’ve ever been emotionally “addicted” to a TV show, video game, beer, person, etc… then you know how it is!

To know how to rebuild trust in a relationship, first, know this:

The most stable relationships have the first two levels of trust present.

For example, in a marriage,

Very few couples have the “Submission” level of trust, though. The reason for this is simple. There’s something about “total surrender” that creeps people out… and yet, that’s the key to understanding relationships that most guys completely miss.

So, most couples hold their relationships together by following the rules (“Institution“) and relying on each other (“Recognition“).

Here’s the problem with this situation…

When your wife or girlfriend cheats on you, then both kinds of trust go flying out the window:

So to rebuild trust in a relationship, you can’t rely on the first two levels of trust. Makes sense, right?

This means that you can only turn to the third level of trust: Submission. Emotional Enslavement.

Let me say it in plain language:

…you must ENSLAVE her emotionally to you.

When you establish the most powerful level of trust in your relationship, then the other two levels won’t matter.

If she’s emotionally addicted to you…

If she completely submits to you…

If she’s totally ENSLAVED to you…

…then she’ll never ever want to hurt you again.

How does that sound to you?

How To Enslave Your Girlfriend Or Wife

By the way, “Enslavement” is not the same as “seduction.” Enslavement is on a totally different level.

In Shogun Method, I teach this core idea:

Every relationship that a guy has with women will go through four stages:

(Inside Shogun Method, this is known as the “stages of love” theory, or the IRAE Model – Intrigue/Rapport/Attract/Enslave.) 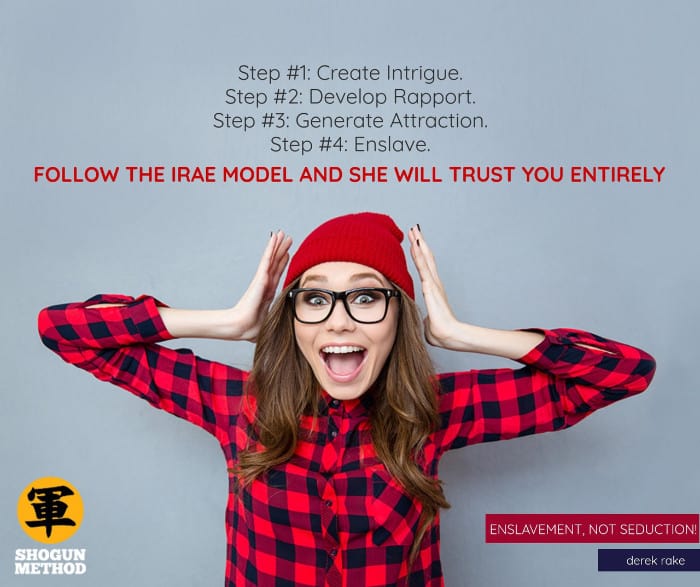 Most mainstream “Pickup Artist” advice can take you up to the Attraction stage. It can teach you how to seduce women, but that’s it.

That’s the reason why most “Pickup Artists” end up alone and miserable in the end. None of the ladies they seduce ever feel emotionally attached to them for long.

I teach guys how to reach the Enslavement stage. It’s where you build the kind of relationship with a woman that endures ups-and-downs, time and time again. If you want to know how to make a relationship last, then you must learn Enslavement.

If your wife or girlfriend has cheated on you, but you want to save the relationship…

…then you only need to work on the last stage: Enslavement.

Two Enslavement Techniques You Can Use Today

Now, there are many Shogun Method techniques you can use to emotionally enslave your woman…

(If you already have access to the program, go to Module 7).

In this guide, I’ll share with you the same two techniques that I taught Lenny to get his wife Fiona back in line.

Ever experienced your woman telling you: “If you loved me, you’d (something she wants you to do)”?

That’s emotional blackmail in its purest form. And guess what? Two can play that game.

Since your woman cheated on you, you have two advantages over her:

Lenny started with small bits of emotional blackmail, like:

“If you don’t transfer to a different acting school, I’ll stop funding your studies.”

…and as the weeks went by, he slowly kept ramping up the blackmail:

“I’m going to be happy, with or without you.”

Lenny carefully chose the kinds of emotional blackmail that Fiona would comply with. The more she complied with what he wanted, the more submissive she became.

Fractionation is what we call a “cornerstone” principle in Shogun Method. All the other techniques are based on it.

So, if you only had to learn one technique – I’d recommend you learn Fractionation.

Fractionation uses storytelling to put your woman into an emotional “trance.” Then, it takes her out of it, and back into it, over and over.

Fractionation works so well because of one reason…

It exploits a woman’s natural weakness for emotional roller coasters. This weakness is embedded in every woman’s psyche.

The more she feels the ups-and-downs with you, the easier it is for you to control and dominate her.

(It’s a female psychology flaw that you can, and should, exploit to your benefit.)

Lenny used Fractionation to the hilt, and soon Fiona started showing the changes he wanted to see:

As a result, Lenny saved his marriage, and their relationship is now stronger than ever.

Would you want the same for yourself?

If you’ve been cheated on by your wife or girlfriend…

If you want her to get back in line…

And if you want to save your relationship…

Then I invite you to take the first step today.

Master Fractionation by joining my Online Masterclass right now. Check it out below:

Once your woman cheats on you, there’s really only one way to save your relationship –

Make sure she doesn’t cheat on you ever again.

And Fractionation is your first step towards that goal.