“Derek, please tell me how to get her interested in me! I mean, we had fun on the first date: passionate goodnight kiss and everything. Then, radio silence, man!”

Sam came to me a month ago, confused and angry at the same time.

I listened in silence because this sounded too familiar. After successfully helping 17,000+ men in the matters of the heart, I know what would come next…

“Teach me how to seduce women, Derek!” See? I knew it.

At this point, I decided to break my silence.

“Look, man. Your problem is you’re getting it all WRONG.”

Sam looked a bit hurt. So, I said:

“Well, you’re not alone. EVERYBODY who comes to me has made the same mistake.”

And here’s what I told Sam…

How To Seduce Women: The Wrong Way

If you think that seducing women consists of being a good listener and buying her flowers, you’re painfully mistaken.

Or worse, have you fallen into the “Pickup Artist” trap?

You know, have you tried using hare-brained tricks from “Pickup Artist” blogs or forums only to fall flat on your face?

Make no mistake: “Pickup Artist” tricks only work in fantasy la-la land where women are immature and stupid.

If you’re going to use “Pickup Artist” tricks in real life, you’re gonna end up chasing your own tail over and over again. No joke.

Seduction Techniques Are Lame: Enslavement Is The Name Of The Game!

Mistakes that most guys make going into the game:

They try to seduce her.

(After all, that’s what Pickup Artists do… “seducing” women, right?)

That, my friend, is pretty much hogwash.

Instead, do what the pro’s do:

Yep. I know that it sounds somewhat immoral (or even illegal), but it’s neither of those two.

Also, the Shogun Method is not chauvinistic (despite what the feminists and politically-correct types may say about me). Still, it will transform you from a sexless nice guy into a Dark Triad alpha male almost overnight.

I’ve got to admit this to you though…

Yes, I’ve come across people in the past who misused Shogun Method to do one thing: just to mess women up.

My critics have accused me of handling a potent weapon to psychopaths. Seriously!

You know what? Frankly, I don’t give a shit.

Why? The reason’s simple… like every other tool, Shogun Method is morally neutral.

You can use a knife to stab someone, but it’s not the “knife’s” fault, right?

The same argument can be made for Shogun Method. It’s all about your intentions, that’s all. That’s what makes it “good” or “bad”.

Despite the criticism that Shogun Method gets, nobody ever questions its power. No one. Ever.

That should tell you just how fucking potent it is. Shogun Method is as legitimate as it gets.

If you’re having problems with women, then this is the answer to all your prayers.

You’re gonna say goodbye to unanswered texts or the worry of losing your woman to an unknown hunk.

She’s gonna be so in love with you, heck, ADDICTED to you, that she’ll never even think to take a breath without you.

That was what Sam wanted. Is that also what you want?

If yes, then you’ll get what you want… but only if you follow what you’re about to read next.

How To Attract A Woman: Four Stages Of Love & Progressive Attraction

What if she’s a prima donna who’s used to compliments and fancy gifts? Can you make her fall head over heels for you?

The answer is YES.

But there’s a catch though, and it’s this…

Understand there are four (4) stages in making this prima donna go crazy for you. And here’s the most important thing to know: you MUST follow the stage, one after another.

This means that for this method to work, skipping steps is a huge NO-NO. Alright?

This is what we call the IRAE Model.

You need to know that the stages must follow this order: Intrigue first, then Rapport. Next, Attract, and finally, Enslave.

What happens if, say, you attempt to Attract a woman without any existing Rapport with her? You’ll creep her out, that’s for sure.

Or, what if you try Enslavement strategies on her without first getting her Attracted to you first? Well… she’ll probably call the cops on you. No joke… don’t do it!

The choice is yours…

Follow STRICTLY this roadmap, and I can promise you she’ll be under your magic like a puppet on a string.

What if you skip or mess up the stages? Well, everything’s gonna end up in a giant pile of shit. Don’t say I didn’t warn ya!

Intrigue generation is the first and THE game-changing stage in the Shogun Method.

Why must Intrigue take precedence?

Is it that important?

Yes. And here’s why…

A woman’s brain is always looking for novelty and amusement.

Before anything, you must CAPTURE her attention first.

Is intriguing her the same as flirting with her? (I hear this all the time.)

You’ll need to tickle her fancy, but NOT in the sense of the meek you-have-such-beautiful-eyes bullshit. (The latter is the cue to the girl looking at you like she’s about to gag.)

Instead, you’ll have to come up with something that’ll make the conversation flow naturally.

(Inside Shogun Method, we call this “Intrigue Pings”.)

To make things simpler for you, here are some examples of Intrigue Pings:

“I shouldn’t ask you this, but I just have to…”

“I may regret this later, but I gotta ask you this…”

As you can see, these examples create that “Whoa… what is it?” effect that will get her talking.

Once you’ve captured her attention, then it’s time to escalate to the next stage…

Alright, listen up. This is where conventional “Pickup” ends, and “Mind Control“ starts.

At the Rapport stage, you’re going to take advantage of the two “flaws” of the female brain:

Let’s riff a little about the second “flaw”…

Once you’ve intrigued her enough, you’ll need to find what those special needs are. (They are different from one woman to the next.)

Then, show her that YOU understand what those needs are, and how YOU can fulfill them.

(Inside the Shogun Method, you can use a routine called the Emptiness Sequence which will do this for you.)

If you do this correctly, you’ll stick into her mind like a leech… and she’ll miss you whenever you’re not with her.

With enough Rapport, you can then escalate to the next stage…

You’ll be kicking into high gear at this stage. As such, this is NOT the time to relax a bit.

Instead, this is where you need to take certain calculated risks.

With enough Intrigue and Rapport in the mix, it’s time to start to Attract her. And if you’ve completed the first two stages properly, Attraction can be trivial.

When done correctly, she will start to have that sense of “we have so much in common!” in her mind.

There are a huge collection of Attract techniques inside the Shogun Method. One of these more powerful ones is what’s called the ENTICE-REPEL cycle.

Simply, this is a way to heighten a woman’s interest in you by first ENTICING her, and then REPELLING her.

Some may find some familiarity with the conventional “Push Pull” technique found in “Pickup Artist” blogs. Let me assure you: they are pretty different.

With enough ENTICE-REPEL cycles, you’ll then be ready to prime her up for the ultimate end game… 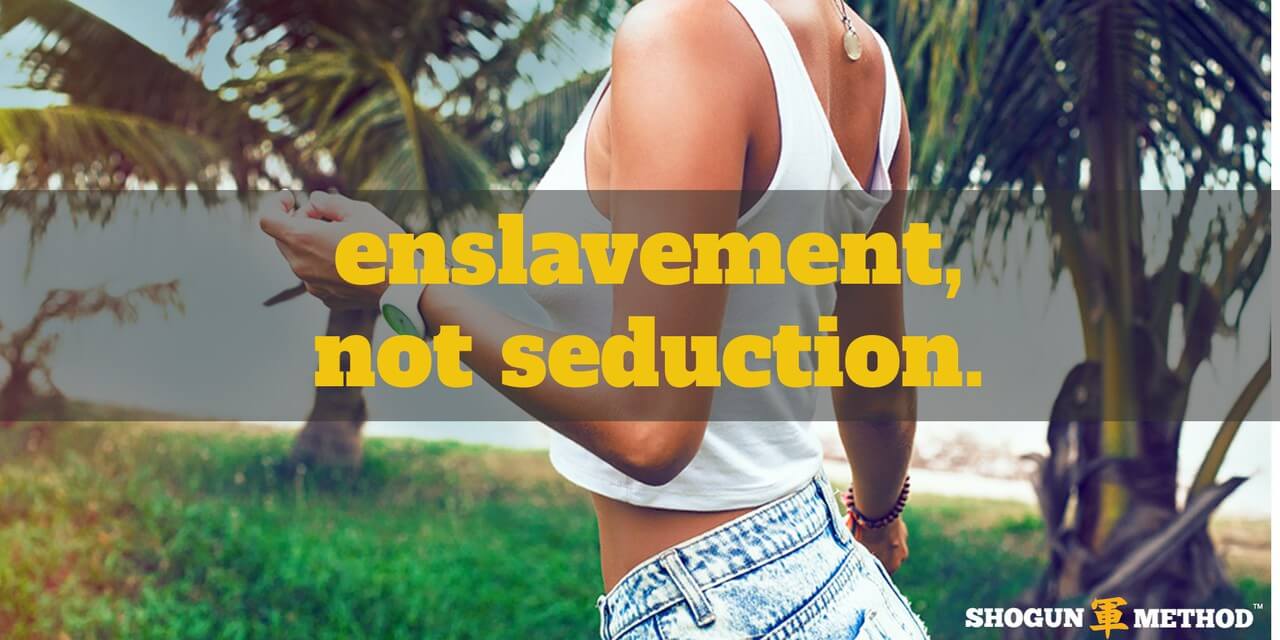 This is the last stage of the Shogun Method.  You’re arriving at the point of no return here.

Stage 4 is where you’ll become her master, and she’s your gentle kitten.

And you know what? Once she is enslaved to you, she’ll do what you say, would like nothing more but to please you, and has no eyes for another man.

You’ll even be more important than her family and friends.

Enslavement strategies inside the Shogun Method are incredibly powerful.

Once done, you won’t be able to reverse the effects afterward. So, heed my advice: only use it if you are 100% sure this is what you want. OK?

Inside the Shogun Method, Enslavement is performed by using the Black Rose Sequence. This, my friend, is the most authoritative “how to be dominant with women” you’ll find anywhere.

(You’ll find out more about the Black Rose in the free Online Masterclass which I am going to tell you about below.)

READ ALSO: Are You Dating A Girl With Daddy Issues?

How To Seduce Women: The Story So Far

Now, if you feel like your head’s exploding with information, that’s normal. There’s a lot to take in, I know.

Because I want to help as many men as possible in winning the game, I’m telling you a secret…

There’s a technique which will bring you across all the four IRAE stages quickly and easily.

Learn all about this killer technique next… continue reading!

Some men claim to have the ability to make women fall in love with them in minutes, not hours, days or weeks.

Guys who are able to do this usually have one special technique in their repertoire, and it’s Fractionation.

Simply put, Fractionation is the grand daddy of all Mind Control tactics, and for good reason.

Unfortunately, we are near the end of this article (which is already pretty long). Fractionation deserves its own guide to do it justice!

To learn more about Fractionation (and other Mind Control techniques) to attract women, click this link:

Follow the instructions on that page. If you qualify for the Masterclass, you’ll receive an email from me.

See you at the Masterclass, alright?