Think of her right now.

Picture her in your mind – her face, her hair, her clothes, her body, her smile.

Now… on a scale of 1-10, how likely are you to have a happy, lifelong relationship with her?

If you thought: “Naaah… I probably got no chance,” then you should relate to Harold’s story…

Older Man, Younger Woman (Or, The Story Of Harold’s Predicament)

“I’m in love with a younger woman,” confessed Harold, a 38-year-old software technician from California.

“But I don’t know what to do, Derek. Dating younger women seem so… taboo.”

Harold had been divorced for almost a decade. After being single for a long while, he met Serah – a lovely, lithe 21-year-old co-worker – and he fell desperately in love.

“Here’s the problem,” Harold told me. “Many younger guys in the company are interested in her, too. An old fart like me can’t compete with them!”

Harold hung his head, sighing in resignation. “I know I could make her happier than any of those kids. I want to.” Then he looked up at me. “But she’ll probably freak out if she realized an old guy had the hots for her. Right?”

At that moment, Harold was expecting me to agree with him, and confirm that he really was in a hopeless situation.

But that’s NOT what happened…

Instead, I leaned forward, looked him in the eye, and calmly told him:

“What if I told you that you could easily outplay her other suitors, win her heart, and make her want to be with you for the rest of her life?”

Harold was dumbfounded, but he asked me to tell him more.

That day, I taught Harold how to win a younger girl’s heart… TOTALLY and COMPLETELY…

…even if he thinks he’s “too old” or if he’s intimidated by the younger, more energetic competition.

And yes – you’re about to learn that EXACT SAME SOLUTION right now, in this Shogun Method exclusive.

Harold faced a long list of “challenges” as he pondered courting Serah:

These challenges are depressing, which is why Harold thought he was a lost cause.

It does seem to be a lot more “cons” than “pros” when it comes to dating a younger woman, right?

And if you’re like Harold – a well-meaning, hardworking older guy who’s secretly attracted to a younger woman – then you probably feel the same way.

But here’s the truth – you’re NOT a lost cause.

I’ll tell you why in the next section. 🙂

READ ALSO: Stages of Love For A Man (How To Make Her Fall In Love In Four Stages)

Beating The Younger Guys: Here’s What To Do

Here’s the reason why you think you’ve lost:

You’re playing the younger guys’ game without knowing it!

Harold thought he was a lost cause because he thought the younger guys’ game was the ONLY way to play the game.

And guess what? With so many younger guys who were more energetic, outgoing, and attractive than him… it was a game he was sure to lose.

And that leads us to the FIRST STEP to beating the challenges of dating younger girls:

Let me show you how “THE game” is played.

First of all, let me reveal to you:

Absolutely. No question. Studies prove it. In truth, it’s an established fact that women crave hot sex more than we do.

But hot sex isn’t the thing women want most. There’s something they want more.

The average younger girl quickly gets tired of younger men. These are the guys who’d say or do anything just to get into her pants, then leave her after the deed.

Sure, maybe they’d sleep with her a few times. Some of them might make her their girlfriend for a few weeks. But that’s it.

And that’s where you come in. 🙂

Younger men will aim to seduce her. But you won’t stop there.

You will seduce her… and then ENSLAVE her.

Yes, you read that right. Enslave her.

But before you react violently, here’s the explanation you want:

The Right and (Terribly) Wrong Kinds of “Enslavement”

There are two kinds of “enslavement” – physical and emotional.

Physical enslavement is dangerous, immoral, and illegal. And it’s NOT the kind of enslavement we’re talking about.

As you’ll see, emotional enslavement is a different animal. It’s a powerful technique that can be used for either great good… or great evil.

“Evil” kinds of emotional enslavement may include:

On the other hand, “good” kinds of emotional enslavement include:

Physical enslavement is universally bad. But emotional enslavement depends on the person using it. It can be bad… but it can also be very, very good.

THAT, my friend, is your edge over younger guys. While the kids are hell-bent on seducing the girl you like, you won’t stop there.

Beyond “seduction”, you’ll enslave her emotionally, as well. And when you do this, something magical happens…

She’ll fall in love with you… and she’ll gladly follow your lead for life.

How To Attract A Younger Woman

I won’t kid you – the technique I’m about to teach you is controversial.

If you feel you can’t trust yourself to use it only for good, and NEVER to take advantage of a girl… then I want you to understand this.

There are enough assholes out there misusing my techniques (and the Shogun Method) to treat women badly. Seriously.

As you continue reading, promise NEVER to use this technique for evil…

…and you know what? If you’re man enough to promise to ONLY use this technique to make your girl happy, fulfilled, and motivated for the rest of her life…

…then your life is about to change FOREVER. 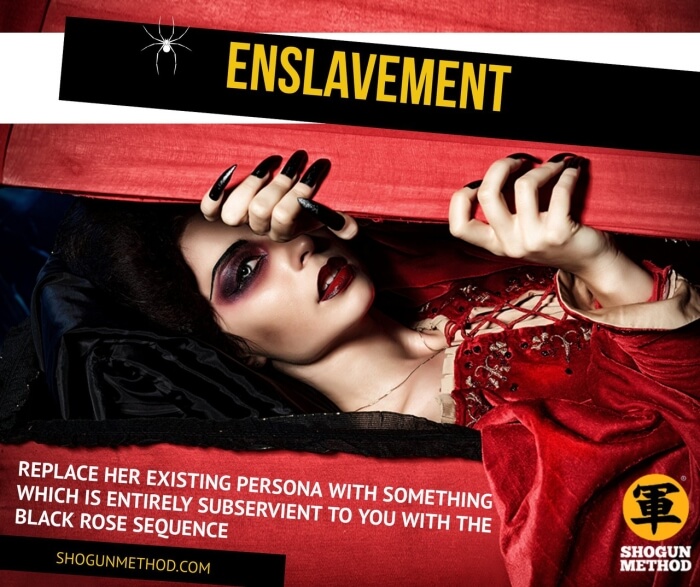 That day Harold came to me for advice, I instructed him to do take these two steps:

“Segregation” is a Mind Control technique that temporarily separates a woman from the outside world. By getting “segregated”, she is separated from anything that might prevent her from falling in love with him.

In Harold’s case, he had to separate Serah from (1) the workplace, and (2) the other, younger guys.

So this was what Harold do to “segregate” Serah:

He knew Serah loved Japanese food, so when a new sushi place opened near the workplace, he invited her to a late lunch there. She happily agreed.

During lunch, they got to know each other a little better. Harold learned they shared a few common interests. These common interests led to further “segregations” – dates away from work and the other guys.

With each “segregation,” Serah felt more and more attracted to Harold. The dates went on until, two weeks after the first date, they started having sex.

At this point, most younger guys would have left Serah. (Or they may have made her their girlfriend first, and THEN left her).

But I instructed Harold not to get complacent. He had to keep going.

He had to emotionally enslave her… and he did this by using the Black Rose Sequence.

Step 2. Use The Black Rose Sequence

The Black Rose is the crown jewel in my coaching program, the Shogun Method.

Here’s what it is in summary:

The Black Rose Sequence is a combination of hypnosis and storytelling that REPLACES a woman’s personality… with a personality of your design.

In Harold’s case, he used the Black Rose to make Serah fall TOTALLY, COMPLETELY IN LOVE with him.

(And he did it by erasing Serah’s personality… with one which is completely COMPLIANT to him.)

The results were incredible:

Harold and Serah are now business owners: Harold has his own eco-design firm, while Serah makes her own jewelry. And the best part – they’re planning to get married soon.

In Harold’s own words:

“Derek, I’d admit that I was shaken when you told me about the Black Rose. I was a little skeptical to be honest… but I loved her so much that I was willing to do anything it would take… anything…

…but Goddamn, I’m glad I took the plunge that day. If not, Serah would have gone to someone else younger than me, that’s for fucking sure!”

If Harold Can Do It, You Can Too!

Harold had one advantage over you – he had been practicing the Shogun Method for a month before he came to me.

You may not have that kind of time. I won’t bullshit you… Shogun Method is not a silver bullet.

But here’s the good news…

You actually DON’T need to study the entire Shogun Method to get great results TODAY.

…then all you need is to learn about Fractionation.

If the Black Rose is the ultimate technique in the Shogun Method… then Fractionation is the most basic one.

Don’t let its simplicity fool you though… Fractionation is the cornerstone skill for everything inside Shogun Method.

By itself, Fractionation will help you:

If that sounds good to you, then here’s something even better…

You can attend my Fractionation Masterclass TODAY, on me. Sign up for the Masterclass below:

Delay any longer and some handsome young guy snatches your girl away before you do! Click on the link and attend the Online Masterclass right away.