How To Deal With An Insecure Girlfriend Or Wife

Are you dating (or married to) an insecure woman?

Do you know how to tell for sure?

Well, to start you off, here are some of the most common signs she’s insecure:

List Of Female Insecurities (Top 10 Traits Of An Insecure Woman)

If she shows any of the signs above, then yes – she’s insecure, and you’re stuck with her.

That’s a dangerous situation to be in, by the way…

I’m willing to bet that, as early as now, your relationship is stressing you out. Well, guess what – it’s only going to get MORE stressful down the line…

…UNLESS you do what Danny, one of my Shogun Method clients, did.

On Dealing With An Insecure Woman: Danny’s Story

Danny is a chef from Chicago. He came over to see me after he stumbled upon this blog some time ago.

Back then, Danny was engaged to Kay, a terribly insecure woman. She had all the signs of insecurity, and then some.

And she was driving Danny crazy.

“I don’t want to be the bad guy in all of this,” Danny told me. “I’ve tried adjusting to her, talking to her, and being passive-aggressive. But nothing’s working! She’s just getting worse!”

“It’s terrible,” Danny lamented. “Two weeks ago I had to stay with my mother who’s in the hospital. Kay wanted to meet for a movie, but I told her I couldn’t.”

“What happened next?” I asked.

“Kay told me that if I didn’t meet her THAT DAY, I could kiss the engagement goodbye,” was Danny’s painful answer. “I didn’t have a choice. I left my mom to see a movie with Kay. I felt like the worst human being in the world.”

“Crazy,” I said, patting him on the shoulder. “But I have a question: How did you manage to come here to see me? Didn’t she know who I was? She agreed to let you go?”

“Are you kidding?” Danny chuckled sheepishly. “I’m here because I didn’t tell her anything. I’m that desperate. If she found out, I’ll never hear the end of it.”

“Of course,” Danny answered. “I’ll do anything.”

“Good. Then let’s get started.”

I then taught Danny what I’ve taught hundreds of other guys before, all of whom had the same problem. Dating or being married to an insecure woman can seem like a HUGE problem…

…but not if you understand WHY it’s happening.

It all starts with knowing the answer to this question:

What Causes Insecurity In A Woman?

ALL women are insecure.

You read that right. ALL women. No exceptions.

Even the most independent and most confident women out there are inherently insecure.

Why? Because of several factors they can’t escape:

Of course, not all women STAY insecure all their lives.

Some of them meet a strong, dominant, controlling man…

…and suddenly, all the causes of their insecurity melt away:

In case it isn’t clear to you yet, let me say it plainly…

If a woman is insecure, the only cure for her insecurity is to meet a strong, dominant, controlling man.

She doesn’t need a “yes-man” who does everything she says.

She needs a powerful man – reliable, successful, and completely in control of his life.

So if your girl is insecure… then you’re NOT that kind of guy to her. And it’s driving her insecurity up to greater heights.

In Danny’s case, his mistake was to try to meet Kay’s every need.

What he didn’t realize was this:

The more he appeased her, the more SHE felt like the dominant one in the relationship.

So I told Danny it was perfect he didn’t tell Kay he came to see me for help. It was the perfect setup for the technique he was about to do, which I call “The Faux Breakup“.

The “faux breakup” is a Shogun Method technique that does two things:

There are basically three steps to it, which Danny followed to the letter:

And when the deluge of frantic texts and missed calls from Kay came in, I told him not to respond.

It was tough for Danny, who was so used to doing everything Kay told him to. But I reminded him: If you give in, she’ll only get even worse.

So Danny stuck with it. He stayed in the hotel next to our office, and “disappeared” from Kay’s life for three whole days.

At the end of three days, I instructed Danny to contact Kay with a simple text message:

“It’s probably good for us to go our separate ways.”

This is the “faux breakup” in action. It’s meant to do two things:

Surely enough, Kay frantically begged Danny to “talk it over” with her. 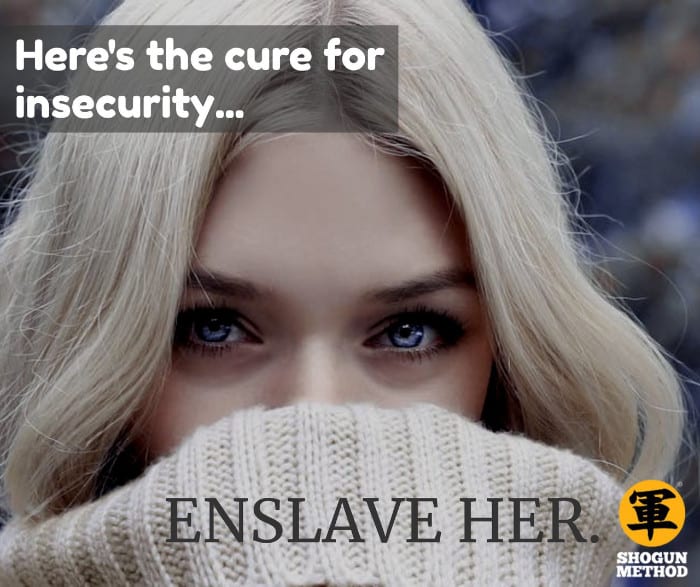 That’s when I told Danny to:

Step #3: Enslave Her With Fractionation.

Fractionation gets a woman to “Fractionate…”

…after which she becomes totally, completely subservient to you.

In the case of an insecure woman, she’ll turn from a hot-headed, disrespectful harpy…

In a little while, I’ll be inviting you to join the online Fractionation Masterclass. In it, you’ll learn what Fractionation is, how it works, and how to use it.

Fractionation’s goal is basically to make your girl EMOTIONALLY ADDICTED to you, and ONLY you.

How? By exploiting her natural vulnerability to emotional roller-coasters.

Fractionation is basically a series of storytelling techniques that will mentally ENSLAVE your girl to you.

Once she’s enslaved – there’s no escaping you.

That’s precisely what Danny did when he finally met up with Kay. After a few subtle sessions of Fractionation, Kay’s personality made a complete 180-degree turnaround:

Needless to say, the relationship became so much better. Danny and Kay got married soon after, and Danny says he’s never been happier in his life.

You’ve just learned how to deal with an insecure girlfriend or wife.

Remember: Fractionation is the key. Without it, you’ll stay stuck with an insecure partner.

But with Fractionation, you can turn her into the calm, respectful, supportive partner you’ve always wanted.

Request Invite For My Online Masterclass

The effects of Fractionation are irreversible.

That means if you used Fractionation on your wife or girlfriend…

…and then dumped her later…

…it’s going to cause her some irreparable psychological damage.

So I need you to make a promise to NEVER use Fractionation to hurt a woman.

If you’re willing to make that commitment, then let’s do this.

And I’ll see you on the other side,