How To Save A Marriage (When The Love Is Gone)

Let me tell you the story of William.

He had been married to Megan for a couple of years.

But what started as a magical marriage quickly devolved into a miserable one.

“Derek, I don’t know what happened,” William told me with a heavy sigh.

“Our first year was awesome. The next year was so-so. This year has been just plain horrible!”

William then told me about what he deemed were the “signs” that their marriage was failing. They were the same signs as those that many other married men gave when they came to me for help:

If you’re married right now, and your marriage is showing even one of the signs above…

…and if, like William, you don’t want your wife to leave and your marriage to fail…

…then let me tell you what I told William right then and there:

It’s Not Your Fault.

All marriages, no matter how well they start out, will have their moments of near-failure. No exceptions.

And yet at the same time, I will tell you the second thing I told William:

It IS, however, YOUR responsibility to fix things.

If you want to rekindle your marriage, only YOU can do that – and not your wife.

It’s entirely on you. No ifs or buts about it.

In this article, I’ll show you the three steps on how to rekindle a marriage. You’ll learn how to spice up a marriage that has gone stale over the years.

Follow the steps in this guide, and you’ll soon relive the magical, awesome marriage you used to have.

How To Rekindle The Romance In Your Marriage (In 3 Steps)

The three steps to rekindling your marriage are as follows:

Let’s tackle each step one by one, OK?

Step #1: Understand Why Your Wife Is Being So Difficult

When your wife is being difficult to you…

…then it just means one thing.

She’s falling out of love.

And the reason is simple:

It’s clear as day that YOU want her more than SHE wants you.

She’s the one in the power position of the relationship… instead of you.

And the more you try to appease her, the more she feels in power…

…and consequently, the more she falls out of love for you.

“But I’m showing her I love her! Why would that make her love me less?”

Answer: It’s all because of a certain flaw in the female mind.

And that flaw is this:

When a woman feels she has power over a man, she’s hard-wired to reject him.

You’ve probably noticed this flaw in action before…

When you confess your feelings to a woman you like… she rejects you.

And yet when you hide your intentions with a woman, what happens?

She gets curious. She won’t reject you. Instead, she’ll spend more time with you, trying to figure you out.

So that’s lesson #1 for you: A woman can’t reject what she can’t “detect”.

The first thing you have to do is to stop obviously trying to work things out with your wife.

Instead, be quieter. Be more discrete. Do your thing, but don’t explain it to her or make a show of it.

You’ll want to continue doing the things you usually do…

…only in a more resigned, “come what may” mindset.

When you do this, your wife will stop rejecting everything you do, and start wondering what you’re up to.

You want her to think:

“He seems different… and I don’t know why…”

“He is behaving strangely… what is he up to?”

Congratulations – you’ve snapped her out of her “stonewall” attitude, and now she’s curious about you.

Wait until she’s paying attention to you – like she’s watching closely for your next move.

And when she asks you what’s going on, or if you have something to say, that’s when you tell her:

“I want to take a break for a while.”

That’s right – you fake-dump her.

It’s important to be vague and ambiguous. You didn’t mention the words “breakup” or “divorce.”

What this does is it makes your wife even MORE confused.

“What does he mean? Does he want a temporary break or a permanent one? What’s he up to?”

It’s going to turn her into an emotional mess. And the more you resist the urge to give in or explain yourself, the more emotional she’s going to be.

Her own imagination will be her worst enemy.

And guess what? That puts you even further in power. First you snapped her out of her stonewall attitude – now you’ve grabbed her full attention.

Eventually, often a few days later, she’ll give in and surrender the control of the relationship to you. And she’ll do this by asking: “Can we talk things over?”

(Women will ALWAYS want to talk shit over. It’s something that’s completely ingrained into their psychology.)

When she’s in that state – powerless and completely at your mercy – it’s time for Step #3. 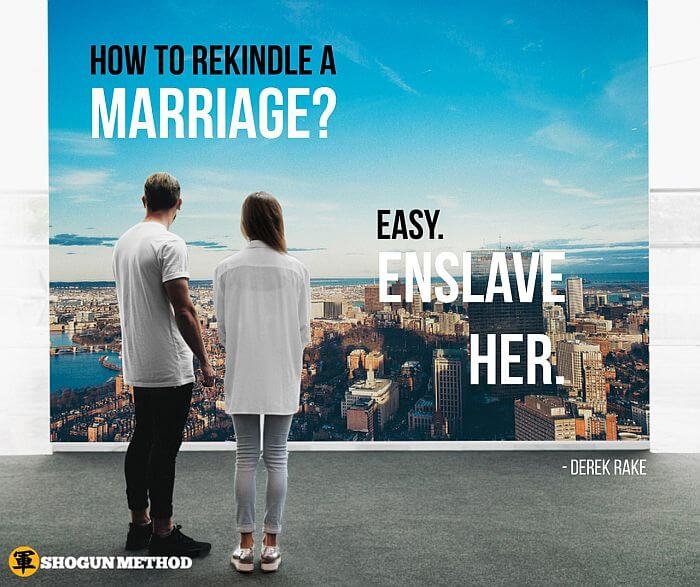 Step #3: Rekindle Your Marriage with The “Deal Sealer”

There’s a technique inside Shogun Method which is popularly known as the “Deal Sealer”.

The reason why it’s called that it’s simple…

It’s the ace up your sleeve. You’ll use it to “seal the deal”. With it, you’ll rekindle the passion and romance in your marriage, and keep it hot for years to come. Believe it – it’s true.

The technique that will seal the deal for you is known as “Fractionation”.

Here’s what you need to know about Fractionation…

It’s possibly one of the most powerful hypnotic / Mind Control / NLP seduction technique ever invented, period.

Here’s how it works – with Fractionation, you’ll put your wife in an emotional roller coaster. You’ll make her feel good… and then sad… and then happy… in cycles, repeatedly.

After she asks to talk things over (Step #2 above), you can lead the ensuing conversation this way:

The result is amazing:

After repeated rounds of Fractionation, she’ll become totally, completely, helplessly addicted to you.

She’ll be hooked on you because she’ll need you for emotional fulfillment.

Why does Fractionation work so well?

Fractionation exploits yet another flaw in the female mind:

That when a woman is on an emotional roller coaster, that’s when she’s most susceptible to suggestion.

This is when you can “plant” ideas in her mind without her knowing.

For example, you can covertly make her believe that she needs to depend on you for:

Fractionation is your ultimate weapon in a failing marriage. It puts you firmly in the power position, and your wife will revert to her docile, respectful, happy old self.

And better yet – your wife will stop taking all your work for granted. Instead, she’ll start appreciating and acknowledging the work you do for the relationship.

And best of all? She’ll start doing her part, too.

It’s exactly what happened to William when he followed the three-step process you just learned.

His wife Megan did a complete 180-degree turn, and they saved their marriage. They recently celebrated their 5th wedding anniversary and their relationship is as strong as ever.

If William could do it, you can do it. Believe me!

So, if your marriage is on the rocks right now, remember the three steps:

Of the three steps, your biggest challenge will be the third one: using Fractionation.

After all, it’s a proprietary Shogun Method technique. They don’t exactly teach it in marriage counseling. (In fact, you won’t find it taught anywhere else.)

Here’s what I can do for you:

I have recorded an Online Masterclass that shows how Fractionation works in real life. You’ll see real examples of Fractionation at work, so you can master the technique more quickly.

Because I don’t want the technique to fall into wrong hands, I have decided to protect the Masterclass inside a private website.

One last thing to remember:

If your marriage is failing because she’s in power, then it’s up to you to fix things. She won’t fix things for you.

And if you don’t change your approach fast, then the divorce WILL happen. It’s just a matter of time.

But if you do the right things immediately…

…by hiding your intentions, fake-dumping her, and then using Fractionation…

How To Rekindle A Broken Marriage?

If you’re already divorced from her (or at the brink of divorce), the three steps as outlined will still work.

Supplement the three steps with these specific “how to save a marriage” guides:

How To Rekindle A Marriage During Separation?

Every case of separation is different, but the general three-step roadmap still applies. See the section above.

How To Rekindle A Marriage After Infidelity?

This is tricky. First of all, you’ll need to be sure that she’s cheating on you – look out for these signs.

So, if you’re sure that she has cheated on you (or if she has owned up to her mistakes), then you can use Fractionation on her.

Given the complexity of the situation, you’ll need to execute Fractionation flawlessly – or you’ll risk losing her quickly. To ensure that this doesn’t happen, learn Mind Control. Request your invite to the Mind Control Masterclass.

Questions? Comments? Leave them below.