Learn The Signs Of A Cheating Spouse… And Enslave Her Before She Leaves For Good!

Is your wife about to cheat on you?

We’ll help you find out soon enough. You’ll know how to catch a cheating spouse once you understand and follow these specific steps that you’re going to discover shortly.

Jerry was a 31-year-old husband and father who came up to Derek Rake HQ for help a couple of months ago.

He had been married to his wife Louise for six years. And while the marriage started out very well, it soon started to spiral out of control.

“Louise is out of control. One moment she’s sweet as honey… and the next moment she’s treating me like the world’s evilest guy since Hitler…”

Jerry went on and on about the ways Louise was driving him crazy. And then he revealed his biggest tell tale sign of all…

Louise had started hanging out with her male friends more often.

So Jerry asked me the big question:

“Is my wife about to cheat on me?”

I had to tell him the truth, so I answered:

“Yes, she is. All the signs are there. The bigger question is: Has she ALREADY cheated on you?”

“Good,” I said, leaning forward and looking him straight in the eye. “Then we still have time. Let’s get started…”

That day, I told Jerry what I’m about to tell you in this article. If you think your wife is about to cheat on you, then you MUST stop her before it’s too late.

Signs Of A Cheating Spouse: Is She About To Cheat On You?

For us guys, cheating is 95% of the time a PHYSICAL thing.

When you’re alone with a hot girl and she takes her clothes off, chances are you WILL have sex with her… even if you’re married.

Yet for girls, cheating is mostly an EMOTIONAL thing.

Or more specifically… when a woman cheats, 95% of the time it’s because her husband isn’t satisfying her emotionally.

Good. Now, let’s see why a woman would cheat on her husband.

If you think your wife is about to cheat on you, then check yourself for the following signs:

Reason #1: When You’re Too Weak For Her…

Reason #2: When You Give Her Too Little…

Reason #3: When You’re Giving Her Too Much…

If your wife is showing even just one of the signs above… watch out.

If she hasn’t cheated on you yet, she probably will… unless you fix things FAST.

I am not saying that simply to get you alarmed… it’s because I’ve seen plenty of guys fucking up for NOT paying attention to these early signs. Don’t be one of them!

ALTERNATIVE VIEW: How To Seduce A Married Woman

How To Catch A Cheating Woman (Do This ONE Thing)

Fortunately, there’s some good news for you…

Keeping your wife from cheating on you involves doing only ONE THING.

If you do this ONE THING:

What’s this ONE THING you MUST do?

We’ll get to that in awhile, I promise you. 🙂 Beforehand, however, you’ll first need to know this:

Why Women Cheat: Here’s The ONLY Reason

What’s the root cause of all wives cheating?

Their husbands were simply NOT DOMINANT ENOUGH.

And that was Jerry’s problem. (He pretty much ticked all the boxes above.)

Good ol’ Jerry was the typical “good husband” – he worked his ass off to provide for Louise and make her (*cough*) “happy.”

Too often, trying to making your wife “happy” can have the exact OPPOSITE effect.

It’s kinda fucked up, I know.

But why women behave this way?

Deep inside, women desire a strong, dominant, manly guy as their life partner.

They don’t want a gentle, weak, “yes-man” kind of guy.

(That’s pretty much what you become when you “try to make her happy.”)

So what should you do instead?

Yes, you read that right. 🙂

If you want your wife to never cheat on you…

…then you MUST enslave her emotionally. No exceptions.

Now, don’t get me wrong…

I don’t mean “enslaving” her in the negative sense of the word.

Instead, “enslaving” means you get her so emotionally addicted, and so hopelessly dependent, on you…

….that she would be absolutely CRAZY to leave you for another dude.

Allow me to explain…

READ ALSO: She Lost Interest! How To Get It Back?

Why You Absolutely MUST Enslave Her

Most husbands NEVER enslave their wives.

As a result, they end up losing their women:

The sad part is that most of these guys’ marriages actually start out very well. Everything’s magical in the beginning…

And yet along the way, the magic fades, and the marriage starts to crumble….

But why do marriages that start out so well go bad so fast? 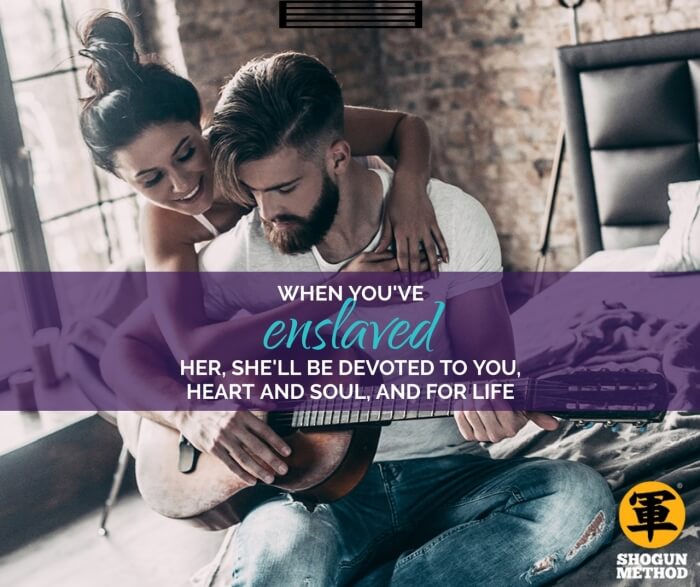 The Number ONE Reason Why Marriages Fail

All women – your wife included – need to go through four (4) stages before they commit to one man for life.

We’ve talked about this in detail in a previous guide, but here’s a short summary –

Those four stages are:

(If you’re familiar with Shogun Method, then you’ll recognize that these are the four stages inside the classic IRAE Model – Intrigue, Rapport, Attract and Enslave.)

Most married men go through the first three stages – Intrigue, Rapport, and Attraction. That’s what made their wives FALL in love.

But here’s the problem:

They don’t emotionally Enslave their wives… which is precisely what the ladies need to STAY in love.

The result? All the good emotions she had at the beginning of the marriage soon give way to frustration. She stops loving him, she cheats on him, and she leaves him.

Don’t YOU make that mistake!

Want to know how to save a marriage? The answer lies in one word: Enslavement.

How To Enslave A Woman: The Right Way vs The Wrong Way

Of course, there’s a right and wrong way to do everything…

The WRONG way to emotionally ENSLAVE your wife is when:

That’s NOT the kind of enslavement we’re talking about!

Instead, here’s the RIGHT way to Enslave your wife…

You make her so addicted to you that she’ll love you and stay with you forever… EVEN IF there are other, better guys in her life.

The fastest, easiest, and most effective way to do it is with a technique called Fractionation.

Fractionation is the key technique for the Enslavement stage of the process. It’s the same technique I instructed Jerry to use with his wife Louise.

He was a bit skeptical, but he tried it anyway.

You know what happened next?

The results utterly SHOCKED him.

Louise turned from an irritable, domineering hyena into a happy, contented little puppy.

And even better, the transformation was literally overnight.

And since Jerry Enslaved her the right way, their marriage started getting better, FAST:

Today, Jerry and Louise are still happily together… and their marriage is stronger than ever. And with Jerry’s new-found leadership skills and dominance, it’s only going to get better with time.

Enslave Her Right, and She’ll Love You Forever

Want to save your marriage?

Want to keep your wife from cheating on you?

Want to make your wife love you forever – every bit as much as you love her?

Then use Fractionation. It has helped Jerry and 17,000 other men (so far) lead successful marriages and relationships with their wives and girlfriends.

And today, it’s going to help you, too.

To save your marriage, join my Fractionation Masterclass today. As my personal “thank you” for reading this article, you can join today’s Masterclass for FREE –

Don’t give up. It’s not too late. Save your marriage today! Watch the Online Masterclass and you’ll know exactly what to do next to get her back.

I’ll see you inside the Masterclass,

How To Catch A Cheating Spouse Texting Or Online?

There are a couple of tools (spyware!) that you can install onto your spouse’s smartphone or computer, but we’ll advise you NOT to do that.

Even if you know for sure that she’s cheating, what are you going to do?

The best action to take is to assume that she’s already cheating on you anyway, and then start taking remedial actions like what I’ve described in the article above.

Maybe you want some EVIDENCE that she’s cheating on you. But look here… there’s absolutely NOTHING to gain from confronting her about cheating. NOTHING.

Instead, I want you to be completely covert about your intentions, and then start doing the necessary to stop her from cheating on you again.

The best thing you can do today is to tool up on Mind Control techniques to use on your wife. To get started, click here.