Emotionally High Maintenance Woman – If You’re Dating One, Then Know This

I’ve got a question for you… have you ever dated a high-maintenance woman?

Or worse… are you dating one RIGHT NOW?

To be clear, she’s high-maintenance if she’s any (or all!) of the following:

So basically… if the woman you’re dating is any of the above, then yes, she’s high-maintenance. And that’s NEVER a good thing.

…she will NEVER be satisfied.

Instead, she’ll just keep treating you badly by making you feel like crap and disrespecting you…

…until she gets tired and leaves you for another man.

I’m not even kidding here.

And you know what? It’s what almost happened to “Jarvis,” one of my Shogun Method clients.

Here’s the story of how his high-maintenance girlfriend, “Tisha,” was running their relationship – and his life – into the ground…

Check out this video :-

“Derek, I don’t know what the hell I’m doing wrong,” Jarvis wailed to me.

“I’m doing everything I’m supposed to be doing.

I’m taking her out on dates…

I’m buying her the stuff she wants…

I follow her preferences in and out of the house…

Jarvis’s girlfriend Tisha had all the signs of a high-maintenance girlfriend. She was needy. She was critical. She was a blamer and complainer.

And most tellingly, she treated Jarvis like a doormat.

“I love her to death, Derek, but I’m going nuts,” Jarvis complained. “I’m the perfect boyfriend. Would it kill her to be a better girlfriend to me?”

That’s when I asked:

“What would make her a better girlfriend to you, Jarvis?”

Jarvis hesitated, but he soon gave me a long list of things he wished Tisha would start doing:

When he was done, I asked Jarvis:

“Have you ever caused Tisha pain?”

Jarvis stared at me in shock.

“I don’t mean physical pain,” I continued. “I mean emotional discomfort. Do you ever tease her, or criticize her, or make her feel guilty… stuff like that?”

“No,” he answered, shaking his head vigorously. “Never.”

I got to my feet. “Then we have a LOT of work to do,” I told him. “Better get started before it’s too late…”

How To Understand A “High-Maintenance Woman”

We’ll get back to Jarvis’ story shortly. Here’s something you need to know before we continue:

Instead, they’re ONLY “high-maintenance” when they’re with a WEAK, SUBMISSIVE PUSSY of a man.

Because deep inside, every woman longs to submit to a strong, dominant man.

The truth is that being dominated is the only way she can be truly happy in life. That’s deeply embedded in the female psyche, and will not change anytime soon.

Now, in case you’re thinking: “But what about feminism?”, let me tell you this:

The feminist movement is not caused by masculinity, but by the LACK of masculinity in the world.

Believe me – if enough of us become strong, manly, CONTROLLING sons of bitches…

…women would start being happy again.

Real men would start turning harpies into kittens, and feminism would die a painful death.

That leads us back to the issue at hand: High-maintenance women…

When a woman becomes “high-maintenance,” it’s a natural response to her man’s weakness.

This makes complete sense if you think about it.

…all these things make a woman more and more UNHAPPY.

And this unhappiness manifests in “high-maintenance” behavior. It’s her instinctive, desperate way to make her man… MAN UP.

…And Yet Guys Continue To Fuck Up

And yet unfortunately… most guys do the exact OPPOSITE of manning up.

They make the mistake of doing MORE of what’s making her unhappy. They mistakenly think that if they appease her more, she’ll finally settle down.

Instead, once she’s had enough, she’ll leave them in search of a REAL man.

So if you’re dating a high-maintenance woman right now, then you need to act. FAST.

Let me show you what I advised Jarvis to do…

How To Turn Her Into A “Low-Maintenance Woman”

The female mind is flawed.

When it comes to a high-maintenance woman, their main flaw is this:

Pain is a much greater motivator than pleasure.

High-maintenance women would go to much greater lengths to avoid pain than to pursue pleasure.

And that, my friend, lies your keys to the kingdom:

To turn a high-maintenance woman into a “low-maintenance” one, you’ll need to inflict some emotional pain on her.

By the way, it’s not nearly as bad as it sounds. Because while you’ll be the source of that emotional pain, you’ll also be RELIEVING that pain for her.

That relief is a SUPER-IMPORTANT part of the process!

“But wouldn’t it be better if I didn’t inflict pain in the first place?”

Jarvis was a shining example of what happens when you’re all about PLEASING a woman… and none about inflicting emotional discomfort. And look what happened to him.

In Shogun Method, I explain that every woman has an “Action Limit” and a “Pain Limit.”

Her “Action Limit” is basically the amount of investment she needs from a man before she does something for him.

If a guy meets a girl and asks for her number, her Action Limit will dictate whether or not she’ll give him her number.

If her Action Limit is crazy, supermodel-level high, she might only give her number if the guy:

But if her Action Limit is low, she just might require him to:

In Tisha’s case, her Action Limit was ridiculously high…

Jarvis desperately wanted her to respect him, but she wasn’t willing to give that respect to him.

And the more Jarvis tried to appease Tisha, the higher her Action Limit went. That was Jarvis’s big mistake.

So I taught Jarvis: “You need to lower her Action Limit. FAST.”

I answered: “By raising her Pain Limit. And FAST.”

I explained that a woman’s Pain Limit is basically the amount of emotional discomfort she feels.

Her Pain Limit rises when:

…and her Pain Limit falls when:

And here’s the kicker:

When you raise a woman’s Pain Limit, her Action Limit drops.

(This is a very important concept, and so you must understand it before continuing. If you don’t leave me a message below this article and I’ll clarify things further.)

With nothing left to lose, Jarvis tried it out. He quietly started increasing Tisha’s pain limit by:

And every time Tisha complied with Jarvis, he’d relieve the emotional discomfort by giving her a dose of pleasure.

She went from simply complying with Jarvis’s requests and demands…

…to following his lead and respecting his authority…

…to totally, completely SUBMITTING to his dominance in the relationship.

And the best part? Tisha was totally, completely HAPPY being subservient to Jarvis!

It was a complete turnaround. Even Jarvis couldn’t believe it at first.

But today, Jarvis and Tisha are still together… with Jarvis firmly in control of things. 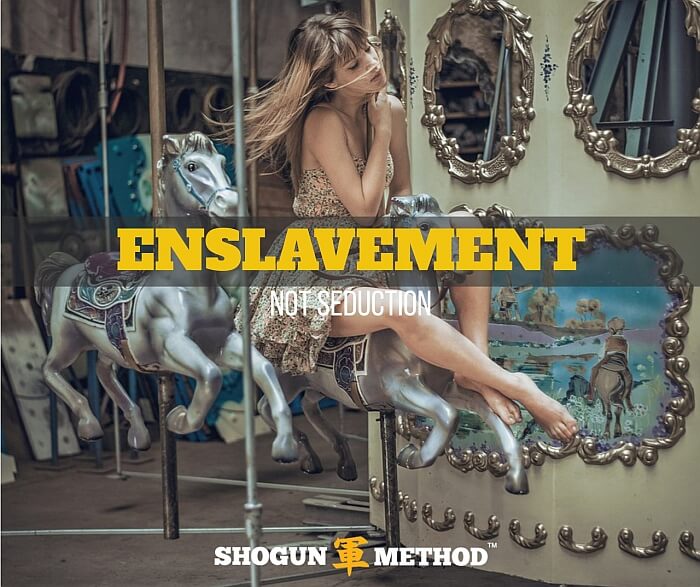 Look here… I won’t kid you – it can be a challenge. Especially if you’re not used to “inflicting pain” on your woman…

…and yet you must understand that this is completely necessary if you want her to be happy.

It won’t be easy, and that’s why you’ll need all the help you can get.

I’ve recorded an Online Masterclass where I teach the core concepts of Mind Control to guys like you.

Mind Control is all about raising a woman’s Pain Limit to lower her Action Limit. You’ll never learn something like this from “Pickup Artists” or conventional “Dating Gurus”.

There’s a real danger in following the wrong kind of advice. And if you do the wrong thing, you’ll stay stuck as your girlfriend’s doormat and stand to lose your woman forever.

PS: Questions or comments? Leave your message below.