Dating A Sociopath Woman: What You Need To Know

There’s this question people have been asking me a lot lately. A LOT.

“Hey, Derek, how can I tell if this chick I’m dating is a sociopath?”

“Hey, Derek, do you have any tips on dating a sociopath?”

Don’t laugh. Those are actually very smart questions for a man to ask.

Because if you have reason to wonder, then there’s a damned good chance you actually are dating a sociopath.

Before you jump to conclusions, here’s what you need to know…

You see, normal female behavior can easily be mistaken for sociopathy—and vice versa.

I will say this, though:

You must know for sure if she’s really a sociopath – I’ll show you how to do this shortly.

And if it turns out that she’s indeed batshit insane, then it is absolutely crucial that you take action. You MUST address the situation IMMEDIATELY.

Again, I’ll show you what the specific actions to take to deal with a female sociopath. Dig in!

“Am I Dating A Sociopath?”

So, how can you tell?

Is she just normal girlfriend crazy?

Or is she literally clinically insane?

Luckily for you, I’ve devised a quick exercise for you. This will help you learn to spot a female sociopath when you meet her in real life.

So, in that spirit, let’s take a look at a couple of quick examples, OK?

“Did you move my box?” Jana demanded.

“The decorative one I put on the end table by the couch.”

“You mean that little pink one?”

“The one that’s too tiny to actually be useful for anything?”

“I put potpourri in it!”

“I wondered why that trail mix smelled so good but tasted so bad.”

“Did you move it, you asshole?”

“You threw it out?” Jana fumed.

“It was empty! You’re the one always getting on my case about cleaning up my trash.”

Jana grabbed Irwin’s all-state football trophy and threw it on the kitchen tile. It smashed to pieces—and cracked the tile.

“What the hell, Jana?” Irwin demanded.

“Wait, what?” Irwin was confused.

“Because you can forget about getting laid this month.”

Jared flopped down on the couch. “This was the worst Friday of my life.”

“Oh yeah?” Wilhelmina asked, turning up the volume on the television.

“Yeah,” Jared confirmed, rubbing his eyes. “Remember that proposal I gave to my supervisor on Tuesday?”

“Which one was that?” Wilhelmina asked him without taking her eyes off the TV.

“Well, he told me today that upper management hated it. Says I have to do redo the whole thing. By Monday.”

“So I’ve got to spend all weekend working on it,” Jared groaned. “There go my football plans with the guys. The worst part is—”

“Jared, could we talk about this later?” Wilhelmina asked. “I’m trying to watch Real Housewives of Minneapolis-St. Paul.”

“Wil, I could lose my job over this.”

“You’re always complaining about how much you hate that company,” she said with a shrug.

“Sorry,” she said, obviously annoyed, and tore open a bag of chips.

Categories of Crazy: The Difference Between Female Sociopaths and Normal Women

So, did you spot the sociopath?

If you said Wilhelmina, you are correct, sir.

Jana is just a typical female. Definitely a bitch, to be sure, but still a normal woman.

Wilhelmina, on the other hand, is a freaking sociopath.

How can you tell the difference?

Well, there are three types of troubling behavior you can expect from all women:

If it does, then it’s proof positive that you’re dating a genuine woman.

Therefore, strife will inevitably energize them and spur them even further. Yes, just like chugging a Four Locos.

That’s why women like to test their men. They enjoy seeing what their boyfriends and husbands will let them get away with.

And, like a mischievous five year old, once they’ve discovered their boundaries, they compulsively have to go a step further.

READ ALSO: Emotionally Unavailable Woman (How To Deal With One)

Worried that your girlfriend, wife, or the random woman you’re sleeping with is a sociopath?

Does one or more of these characteristics sound familiar?

If so, you’re probably dating a sociopath.

Do they all sound familiar?

Then you’re definitely dating a sociopath. Or worse, a sociopath narcissist.

No matter what, you need to take massive action right now.

Your sociopath girlfriend (or wife!) is a super-massive hurricane. And all that crazy is eventually going to make landfall.

When she does, she’ll destroy everything you’ve built in your life. Then she’ll breeze through, leaving you to pick up the pieces and start over.

You must tread carefully, and carry a big stick. Or, even better, a fucking katana.

Lucky for you, the Shogun is here to help you through it.

Sociopathic Girlfriends: A Short Guide to Care and Handling

You shouldn’t ever get angry with your girlfriend for being a sociopath.

That’s mainly because you’ll only add fuel to the bonfire of her craziness.

Besides that, your sociopath girlfriend legitimately can’t help it.

Sociopathy is an evolved condition. It’s not a choice. It’s a female psychology thing.

And if you leave the problem unchecked, she will make your life a living hell.

That’s right. If you put up with her, she’ll emotionally and mentally break you. Then she’ll just ditch you anyway.

You’ll end up as a used-up plaything. And she’ll be on to someone else who’s more fun.

Or you can man up, take charge, and save your relationship.

But how can you “beat” a behavior that’s evolved to compete so successfully in society?

Here’s how: you’re going to have to one-up her.

In other words, the only way to fight sociopathy is with psychopathy.

Now, don’t get me wrong—I’m not saying that you should act like a psychopath.

But you should know the One Thing that makes psychopaths so socially and biologically successful.

We’ll talk about that One Thing next…

How To Successfully Date A Sociopath

That One Thing is this –

Now let’s do a quick recap:

We’ve already established that your sociopath girlfriend has no empathy.

Not for you. Not for anyone else.

And I’ve written before about this –

Prioritizing your girlfriend’s needs over yours is unbelievably stupid.

Putting her needs first? Well, guess what? That will only lead to one thing: a domineering girlfriend.

Trust me: you don’t ever want your girlfriend to dominate the relationship.

Unless you’re a real sucker for pain, that is.

At this point, if you haven’t done so already:

Forget about the “conventional beliefs” about relationships.

The thing is this: all your life, you’ve been lied to.

You gotta unplug from the societal Matrix.

You and your sociopath girlfriend are not playing according to some mutual “social contract”.

You are locked in a struggle for survival. Your own survival, and your relationship’s.

And it’s time to bring out the big guns.

How To Conquer Her Sociopathy: Enslave Her With Mind Control

To conquer your woman’s sociopathy, do this:

You must be willing to manipulate her.

If you want your relationship to continue and thrive, that is.

You do want that, don’t you?

Of course. So here’s what you have to do…

You must use Mind Control to enslave her. 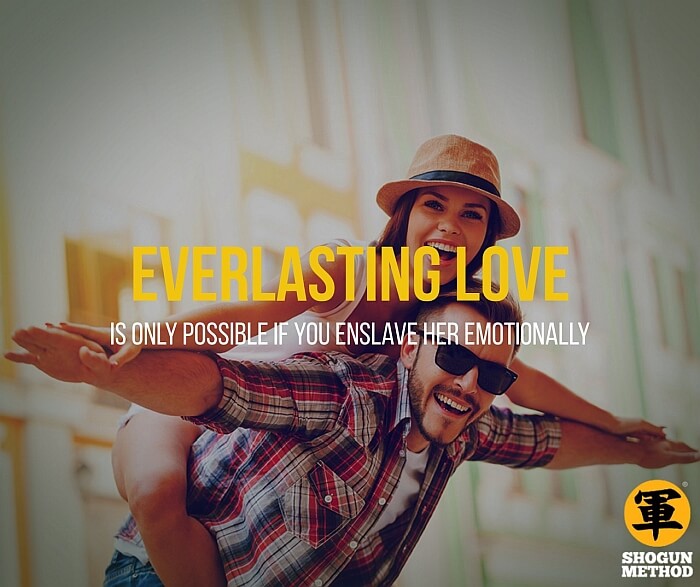 I don’t mean chains and dungeons and stuff like that. (Unless she’s into it, of course. In that case, roll with it!)

But you must bend her to your will, instead of succumbing to hers.

And guess what? Mind Control works on any woman, no matter what the circumstances are.

The woman married to your boss.

(No joke. A student of mine used Shogun Method and cuckolded his boss just for shits and giggles. He got fired, but he told me it was worth it. Crazy son of a bitch.)

Getting Her Mentally Addicted To You

The first step is creating a mental addiction in your woman.

That is, an addiction to you.

Long story short: when you’re done with her, she literally won’t be able to bear the thought of living without you.

And from there, she’ll be utterly dependent on you just to live through the day.

(If this sounds rather extreme to you, then, guess what? I’ve never said that this is easy, light-hearted shit. You’ve got to have a pair of brass balls to do this. Shogun Method is not for kids… or pussies.)

This is done using the Black Rose Sequence inside the Shogun Method.

(And if you’ve seen someone else claiming to know how to teach the Black Rose elsewhere, then you’ve seen fakes. I invented it, and therefore am the only one qualified to teach it.)

What the Black Rose does to a woman is this –

It completely replaces her personality.

When you use the Black Rose on a female sociopath, you’ll turn that heinous bitch into a mewling kitten.

I’ll kid you not… the Black Rose Sequence is pretty advanced.

It’s like a Ph.D. in Mind Control. And if you’re just getting your feet wet, then there’s a simpler alternative…

The simpler alternative to the Black Rose Sequence is this Mind Control technique:

Make no mistake… despite its simplicity, Fractionation is a very powerful tool.

It manipulates a woman’s mind by modulating her emotions. It takes her from an ecstatic high down a steep drop to an abysmal low…

And then back up again….

And guess what? Like the Black Rose Sequence, Fractionation is universally effective on all women.

And once the effect kicks in, you will be the one in charge. Just like you’re meant to be.

So, what do you think?

Are you ready to start using Fractionation to keep your sociopathic girlfriend or wife in line?

If so, I applaud you. You’re making a responsible choice.

On the other hand, if you just want to use this technique to take advantage of women, then don’t click on the link below.

If you agree to that simple rule, all you need to do is to join my Online Masterclass –

In the Masterclass, I’ll teach you how to use Fractionation to tame any woman – sociopaths or not.

PS: Questions? Comments? Leave me a message below.