Is that what you want?”

Jim’s wife shoved him hard as he snapped his neck round to look at her.

From the earlier conversation I overheard, Jim had taken his wife out to get takeaway food.

Apparently, it was to make up for the crime of not being home the day before when she had a shit day.

They were sitting waiting for their food. Jim had been staring at the fish tank across the room. It looked like he was contemplating the state of his relationship. He was just unlucky that an attractive waitress walked past the fish tank…

…and that’s when his wife exploded.

I saw this scene when I went to get Chinese food a couple of weeks’ ago.

There’s more to Jim’s story (I’ll share that with you later below), but for now, here’s what you should know:

Sadly, suffering in a relationship with an over controlling wife is now very common.

(And if you’re facing a similar problem in your marriage, understand that it’s not your fault. More on that later.)

Here’s some good news, however:

It’s a problem is also completely reversible… but only if you know what to do.

In this article, you’ll learn to deal with a controlling wife, and how to beat her at her own game. Read on!

First, let’s define the problem before we try to solve it.

Answer these questions to deduct if you have an over controlling wife:-

Characteristics Of A Controlling Wife

If you answered “Yes” to any of these, she’s done with testing your boundaries.

Listen: your boundaries are a dot to her. She’s created her own boundaries and you are the one who is stuck.

For all you know, you’re married to a female sociopath.

Or she might just be some girl with daddy issues with her psychological problems now flaring up….

And you know what? Not only is she controlling…

More important than that…

She’s unhappy because she wants a man who takes charge, not a man she has to tell what to do.

If you think your marriage is in trouble, and you want to know how to save a marriage, then it’s important to understand this completely.

Fact: women don’t want to be in control of a relationship. When they do have control, they’re miserable.

Taking control and leading is not in her nature, and that’s why she’s so unhappy. Millions of years of genetic hard wiring are telling her that this is wrong. She knows it’s wrong. And that is the cause of her unhappiness.

Makes a lot of sense, right?

READ ALSO: How To Save A Marriage

How To Deal With A Controlling Wife: Reversing The Repression

So now you know what the problem is, how do you fix the relationship?

How do you deal with a controlling wife?

First, here’s what NOT to do.

Don’t react and try to make things up.

Doing chores or giving her back rubs? That shit won’t work.

Appeasement fails with a woman (and a dictator).

If you try to appease, her demands will only become more irrational. As her demands spiral upwards, the relationship will spiral downwards.

… and you got to realize that all you’re doing is buying time until the next outburst.

If this has been your strategy, don’t feel too bad. It’s the “marry your best friend” model of marriage touted by the modern society that is to blame.

Contrary to what the society wants you to think –

She doesn’t want a friend. She wants to follow a strong leader. Somebody she admires.

And she’s been testing you to see if you’re strong enough to take charge of her and the relationship.

“Whatever you want” are the words of a weak man. And no woman wants to be with a weak man.

You can turn it around. You can transform your wife into a woman who is feminine, happy and loving…

Understand that the more she follows, the happier she will be.

But before I get into the “how to turn the tables”, the first step is to stop appeasing her.

Don’t try to fix anything. Don’t ask for her opinion.

Expect some resistance but stay strong – it’s what she wants from you. (Even if she doesn’t realize it.)

And once you’ve stopped appeasing, you’re ready to take the next step forward…

If you’re living with a controlling wife, then this is the answer to your prayers…

Our infamous 3-step formula for flipping the script on a wife who is a control freak. 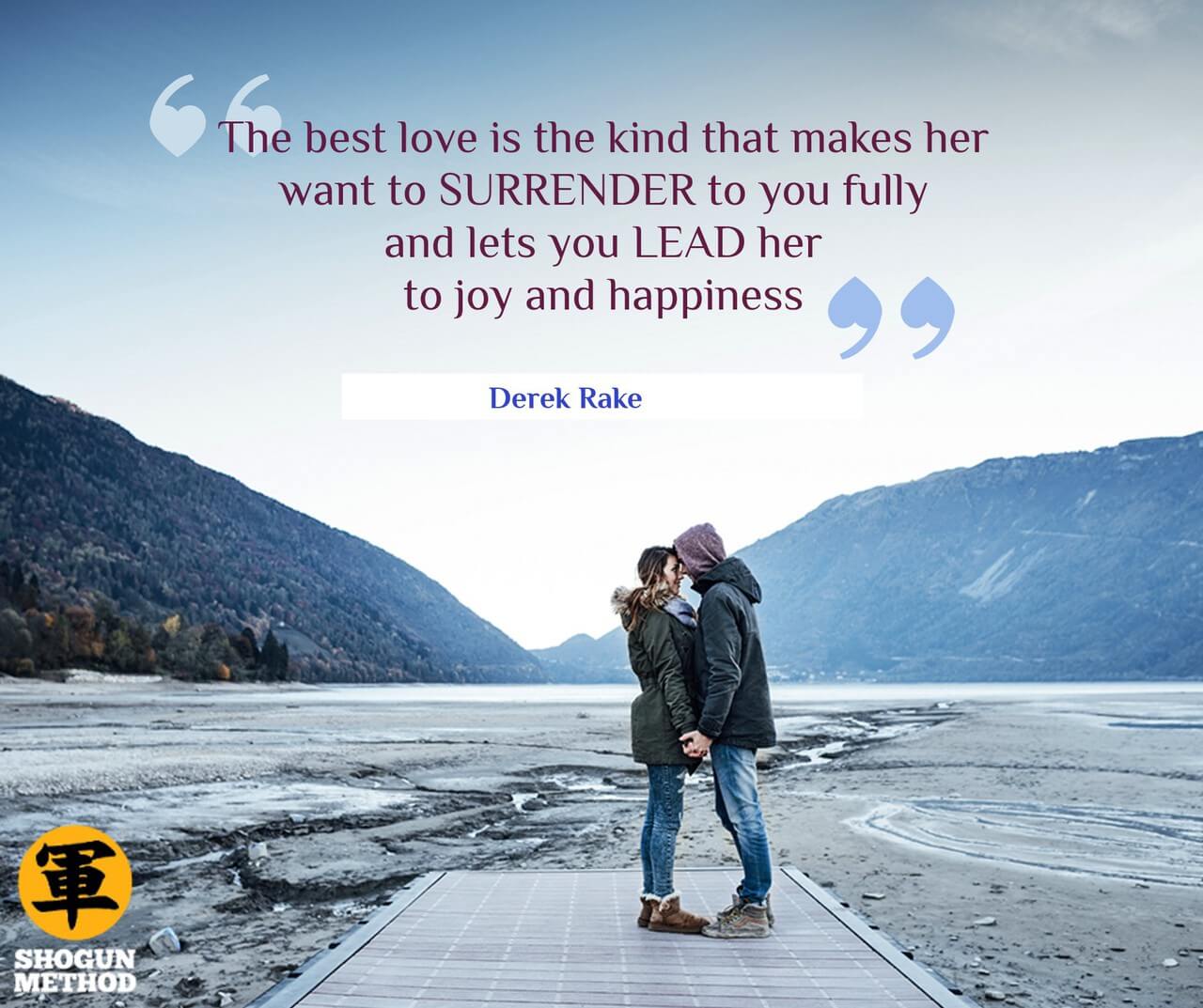 – Clark Gable, Gone With The Wind

What’s the opposite of love? Hate?

Love and hate are at the same end of the emotional scale. It’s the people we love who can hurt us the most, right?

The opposite of love, my friend, is indifference.

So, the first step is to back away and be indifferent.

Instead of placating and pleading, you do the opposite. You become emotionless and stop caring.

This will shake her reality. She thought she could control you. So when you pull away she will become indignant.

Your aloofness will take away her security that she is indispensable to you.

This will turn the relationship dynamic on its head and make her chase you.

“We chase what flees from us.”

Here are few practical ways you can become a Zen master of indifference:-

How To Make A Woman Want You

And that’s just for starters. Once she’s a little shaken by your indifference, move on to the next step…

This next step follows naturally from Step 1. (You’ll see why exactly.)

When she pursues you as you pull away, tell her that you “need time to think” and that you two should “cool off for a while”.

Be vague, keep her guessing, and never say “it’s over”.

Your feigned break up will send her imagination into overdrive:

“Has he met somebody else?”

“Does he not love me anymore?”

Make no mistake… the fake breakup gambit is your secret weapon!

It can look risky, but it flat-out works. Trust me on this.

And when it works, it will tip the power dynamic of the relationship back towards you in one fell swoop.

Once you’ve drawn out the fake break up as long as possible, get back in touch.

And when you see her, DON’T declare your undying love. That will UNDO everything that you’ve done.

You’ve gone too far to fuck things up!

If you’ve done the first two steps correctly, she will be as vulnerable and docile as a pussycat.

At this point, you’re in a good position to seal the deal and finish the job.

And you do this by putting her through an emotional roller coaster with a Mind Control technique called Fractionation.

Keep reading to find out how to do this…

Fractionation: How To Control Your Wife With Hypnosis

With Fractionation, you’ll turn the tables on her so that she submits to your authority and dominance.

So what’s this technique, and where did it come from?

Fractionation (like its offshoot, the October Man Sequence) has its origins in the circles of master persuaders and hypnotists.

Many years ago, expert hypnotists stumbled upon a very interesting finding.

They noticed that after taking subjects out of a trance and giving them a break, the second trance was much deeper. This then led to the creation of the Fractionation technique.

When you successfully get a woman to Fractionation, here’s what happens…

You’ll exert full control over her emotions. And she’ll look up to you as her slave master.

Now here’s the other thing that you must understand –

The golden rule: never bore a woman. Making her feel scared, confused, indignant, etc., is superior to boring her.

When you can whip up relationship storms at will, and quell them just as easy, you’ve mastered Fractionation.

You’ll always have a woman’s love and devotion no matter what happens in your life.

Warning: Not For Lily-Livered Pansies

As you can see, overusing or misusing Fractionation on a girl can turn her into an emotional wreck.

If you’re putting her through drama every day, making her think she’s losing you, pulling her from dread to despair, from panic to passion…

…she’ll need therapy and pills for the rest of her life.

That’s why I don’t teach this technique to just anyone.

You see, I’m very selective about the guys I teach Fractionation (and the Shogun Method) to.

They have to be sincere guys who want the love of one woman. Not “Pickup Artist” types who move on after ruining a woman for everybody else.

Are you someone who is sincerely wishing for a better relationship with your woman?

If you are, here’s the good news:

I’ve put together a free Online Masterclass on Fractionation to help you.

Click on this link, watch the presentation, take notes, try it out.

You’ll be able to make her back off or come to you at will.

Through all the tears, tantrums and makeup sex, you’ll be calm and in control.

Because YOU created all the drama.

PS Back to Jim’s story in the beginning…

I slipped Jim my business card in the restaurant. I would hate to see a man suffer through life with a controlling wife… especially as it’s so easy to fix.

And guess what? He contacted me, and followed through with the 3-step formula which I’ve shown you above.

The results were tremendous. Jim’s wife (Laura) had completely turned around, with a new personality which is as docile as a kitten.

Shocking? Hardly. It’s all in a day’s work for us in the Shogun Method HQ. 🙂