The October Man Sequence gained its notoriety when it was first mentioned in Neil Strauss’s bestseller The Game: Penetrating the Secret Society of Pickup Artists.

This was the beginning of the method’s cult status with members of the art of seduction community.

So what makes it such a cult hit (and why has it caused such controversy?)

Some users have claimed that the technique has enabled them to get a woman to go to bed with them within 15 minutes of starting to use it.

Naturally, there’s probably going to be a little hyperbole there, but this technique’s overall effectiveness is never disputed, ever.

In fact, for all men who are serious in their wish to gain the advantage in the dating game, the October Man gives you the “edge” you’re looking for…

And think about it, even if this technique is still only 20% or 30% as powerful as people claim, that still makes it pretty damn powerful, doesn’t it?

What Is The October Man Sequence?

The method is the invention of two underground seduction veterans… legends in the community who remain anonymous till this day.

These guys first got a taste of the limelight when they were mentioned in the book by Neil Strauss (he gave them two different pseudonyms – IN10SE and something else).

And yet the book made no mention whatsoever as to the origin of this powerful technique.

Don’t worry, though – because the hard work’s all been done for you by yours truly…

You are now about to find out the true secrets of the October Man routine, all wrapped up and ready for you to open. You’re welcome! 🙂

Fractionation: The Fundamental Root Of The October Man Sequence

Here’s what October Man is really all about…

This Sequence was actually built on a little-known hypnosis technique known as Fractionation.

Stage hypnotists and hypnotherapists have used Fractionation to make their audience and clients quickly fall into a trance.

The idea is to make the subject go in and then back out of a mental state repeatedly and quickly (more detail on what I mean by this). This will make her fall ever deeper into the trance every time this is done.

Here’s where it gets really interesting. 🙂

We have found out that Fractionation works similarly when we’re talking about making a woman fall head over heels in love.

In other words, by deliberately and carefully making someone fall in and then out of love, you get women to become emotionally “addicted” to being with you.

This remarkable discovery is almost certainly the biggest that’s ever been made in the underground seduction movement.

Now, for the very first time, any guy has the ability to totally transform into a complete stud in the eyes of any woman, simply by mastery of this one technique.

Isn’t that the most amazing thing you’ve heard?

In a nutshell, here’s how Fractionation works –

(Remember previously when I talked about going into and out of a state repeatedly? This is what I was referring to).

Now the complete Fractionation sequence involves, of course, rather more than I’ve described here, and I’m afraid it’s too involved to get into in detail here.

Fortunately, though, there is a completely free-of-charge “Cheat Sheet” that’s available for download. (UPDATE: we have taken the Cheat Sheet down for updating – please check back later.)

I highly recommend it, and I urge you to get it now as it’ll “shortcut” the way you can completely understand this technique.

With the Cheat Sheet, you won’t need to wade through a shit-ton of technical research like other schmucks had to. 🙂

October Man was the very first real attempt to adapt the original system of Fractionation so it could be used for attracting women.

Some guys in the seduction underground have gone on to develop their own versions of Fractionation, often for use in very specific circumstances.

For example, our very own Dark Rake Method (as well as proprietary Shogun Sequences) is also built upon Fractionation as the foundation.

Similarly, you both build and then deepen rapport utilizing a broad range of powerful psychological triggers.

(This Dark Rake system has actually now been superseded by the new flagship in our fleet – the Shogun Method which gets a third-party review here).

And by the way, if you’ve ever heard anyone talk about using the “loophole” in women’s psychology it’s a good chance that these tactics are ones that are based on the Fractionation technique.

These systems and methods involve advanced industrial-strength techniques in Mind Control that are designed to do just one thing:

To hack a woman’s mind, hit those “attraction triggers”, and make her fall head over heels in love very quickly – whether she wants to or not.

Bringing us bang up to date, the so-called Black Rose technique has been hitting the headlines, claiming it has even more power than October Man…

However, there is one fundamental difference between them. Black Rose and October Man differ because…

Most of the “Pickup Artist” gimmicks or other “seduction” techniques usually only work over the short-term. Or at best, the “pickup” or approach stage.

Now that’s totally fine if you’re just looking for a quick way to steal a quick kiss, or to get a phone number…

…however, if you need something longer lasting, something that’s much deeper (and if you want to be dominant over women), Black Rose is what you’re looking for.

Is The October Man Sequence Evil?

It’s a damn good question… and the jury’s still out!

In fact in some cases, using October Man Sequence (or any kind of seduction method grounded on Fractionation like the Black Rose Sequence) in order to attract a woman is complete overkill. It’s like “bringing nukes to the gunfight”.

It is simply unnecessary, as well as having the potential to harm everyone along the way. (Yes, including you.) Of course, if you’re already inhibiting dark triad tendencies, then you may not care about this at all. 🙂

A master practitioner of the October Man Sequence is easily able to control women’s feelings (therefore, by extension, their emotional states). And this means the power of complete control, which can make her extremely vulnerable. (And yes, this also works with female sociopaths, or even narcissists – if you’re married to one!)

Now answer me this question:-

Imagine you were able to make women simply bend to you and your every wish. Would something like that make life a HELL OF A LOT better?

October Man (Or Fractionation) Isn’t For Everyone

Some seduction community veterans argue that these techniques should be fully hidden from the rest of the world.

If you ask them why they’ll say it’s because there are potentially very harmful consequences.

They’ll say that giving anyone easy access to the October Man Sequence (or even the Shogun Method) is akin to allowing kids run around the place with scissors. Things ain’t gonna end well!

However, the other side of the coin is that for those guys who are interested in extreme influence or the deeper, darker side of human psychology (or who are just curious), knowing October Man is going to quickly bring your skills up a fair few notches. 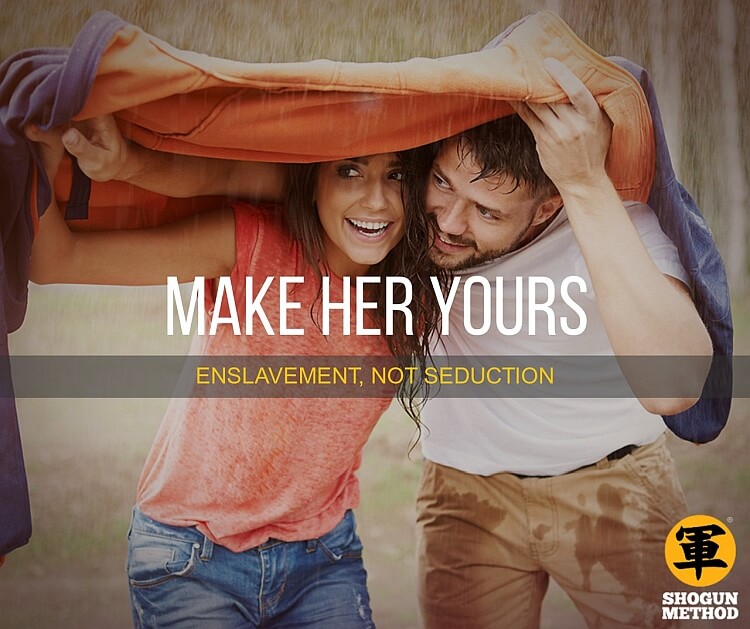 So, here’s the name of the game:

If you’re female, and you’ve got experience of “speed attraction” (in other words, you develop a bit of an infatuation with a man very quickly, say within an hour of first meeting), chances are you’ve been put under a spell by an expert in the October Man Sequence or Shogun Method techniques.

If you’re a guy, congratulations – you’ve stumbled across what’s probably the most potent seduction system ever.

Master this technique and you will achieve the very highest level of proficiency both attracting and dating the most attractive women.

Same Results, But An Easier Way

There is a problem with using the full October Man, and that it’s this…

The October Man Sequence can be rather tricky to master if you lack a thorough background in principles of hypnosis and NLP (neuro-linguistic programming).

It is NOT a silver bullet solution!

The truth is that t’s not really important to know WHY it works.

To use an analogy: a fighter pilot doesn’t have to understand either HOW or WHY his jet engine works. He just needs to be a master at flying his jet to become an ace.

For you, all you have to do is to master the USE of this technique to score victories in love and dating. Leave the theory and mechanics behind WHY the technique works to psychologists and university professors.

OK, so here’s what it all boils down to.

If you’d like to dig deeper into the use of Mind Control to seduce and enslave women emotionally, then check out this online Masterclass:

This is a Masterclass during which you’ll learn how you can use Fractionation in order to quickly seduce any woman, exactly like what the pro’s do. Click on that link and follow the instructions.

See you at the Masterclass!