How To Use Emotional Manipulation Techniques To Win With Women

“Derek, here’s the deal. I used to be balls deep every night. Now she’s not giving me anything.”

“When girls I dated did this, I used one of my tricks. I chased other women or told her there was no connection. A freeze-out always worked.”

I leaned back in my chair and got ready to tell him what he didn’t want to hear.

In short, he’s about to learn powerful psychological manipulation techniques that will turbocharge his ability to win women over.

Growing Out Of The “Pickup” Phase

Mike was a Shogun Method client of mine.

He came to me because he had evolved past the pickup stage of the game.

In fact, up until a couple of months back, he was pretty good at “pickup”.

He had approached a ton of girls. He knew how to make girls think he had “high value”. He had his date routine grooved to the point where he got the lay 70% of the time.

But it got to the point where he didn’t get the rush from banging new girls that he used to. He said it was like “sleeping with the same body every night but changing the head.”

So Mike settled down with a great girl and started building a future.

He didn’t realize the real game was just starting.

The problem with “pickup” is that soon after you pick something up, you’ll have to put it down again.

You talk to a girl at the club, entertain her, and get her number. But then she won’t text you back and flakes on the date you arranged.

So you chase other girls, pick them up, and repeat the cycle.

But like most merry-go-rounds, after a while, you want to get off and pursue something deeper.

And that’s when guys like Mike come to me for help.

Let’s not kid ourselves here. The white picket fence and the nuclear family is what all men eventually want.

Sooner or later, guys will grow out of the “Pickup Artist” phase and want to settle down with that one special woman.

Here’s the kicker though…

The one “special” woman in that idealized picture is loving, obedient, and feminine.

She’s not the domineering, disrespectful, game-playing and narcissistic wife that most guys put up with these days.

The pickup game that you used to successfully date and bed women? It won’t work in a long-term relationship, sorry.

The dynamics have changed.

You live together. You’re around each other more. You don’t have the sense of mystery that you used to have.

You can’t punish her by dating other women anymore. Unless you want to fuck your relationship up… don’t do it.

So that high-value facade that you created for the club sluts won’t work anymore.

It’s exhausting to keep it up. And she’s around you enough to know the real you.

After all, as a wise man once said,

In the worst case scenario, your wife might downright hate you.

So if pickup tricks fail to keep the embers of love burning in the long-term, what should you do?

It’s all lies and bullshit. For example:

“Communicate better and express your feelings to each other!”

“Schedule a date night once a week!”

“Do nice things for each other!”

If you’re reading stuff like that in Cosmopolitan magazine or on Yahoo’s home page… c’mon man. Stop it already.

So what’s the secret to keeping her desire high in a long-term relationship?

No. Pickup Artist tricks are so laughably juvenile. Come on now.

Back rubs and warm baths?

Nope. Never worked, and never will.

Manipulation Techniques In Relationships (And Marriages)

Make no mistake: the word manipulation does come with strong negative connotations.

However, it’s important to rethink what manipulation really means in real life.

And I do mean everybody.

Women put on makeup and high heels. Men put on their best shirt and tie while showing only their good side to win a job interview.

And you know what? Children are the biggest manipulators of all. Think about it. They throw a tantrum… just to get your attention. Or, to buy them the latest Transformers toy.

Manipulation is in our genes.

It has to be. You see, the two strongest drives in human beings are survival and replication.

And humans are hard-wired to manipulate as much as is necessary to survive and replicate.

READ ALSO: Mind Control Techniques (How to Manipulate Her Mind Into Falling For You)

Of course, there’s that age-old belief that manipulation is, by nature, evil.

Let me offer a different way to look at it.

What makes something “evil” has got everything to do with that person’s intentions.

The only difference is that some people manipulate with bad intentions while others only have good intentions.

Children manipulate their parents all the time. You know, for toys, chocolate, attention and love. Surely they can’t be “evil”, right?

So here’s the deal…

You want to build a loving, healthy, long-term relationship with a good natured woman?

If that’s the case, you have absolutely nothing to worry about.

So “get over it” is step number one. 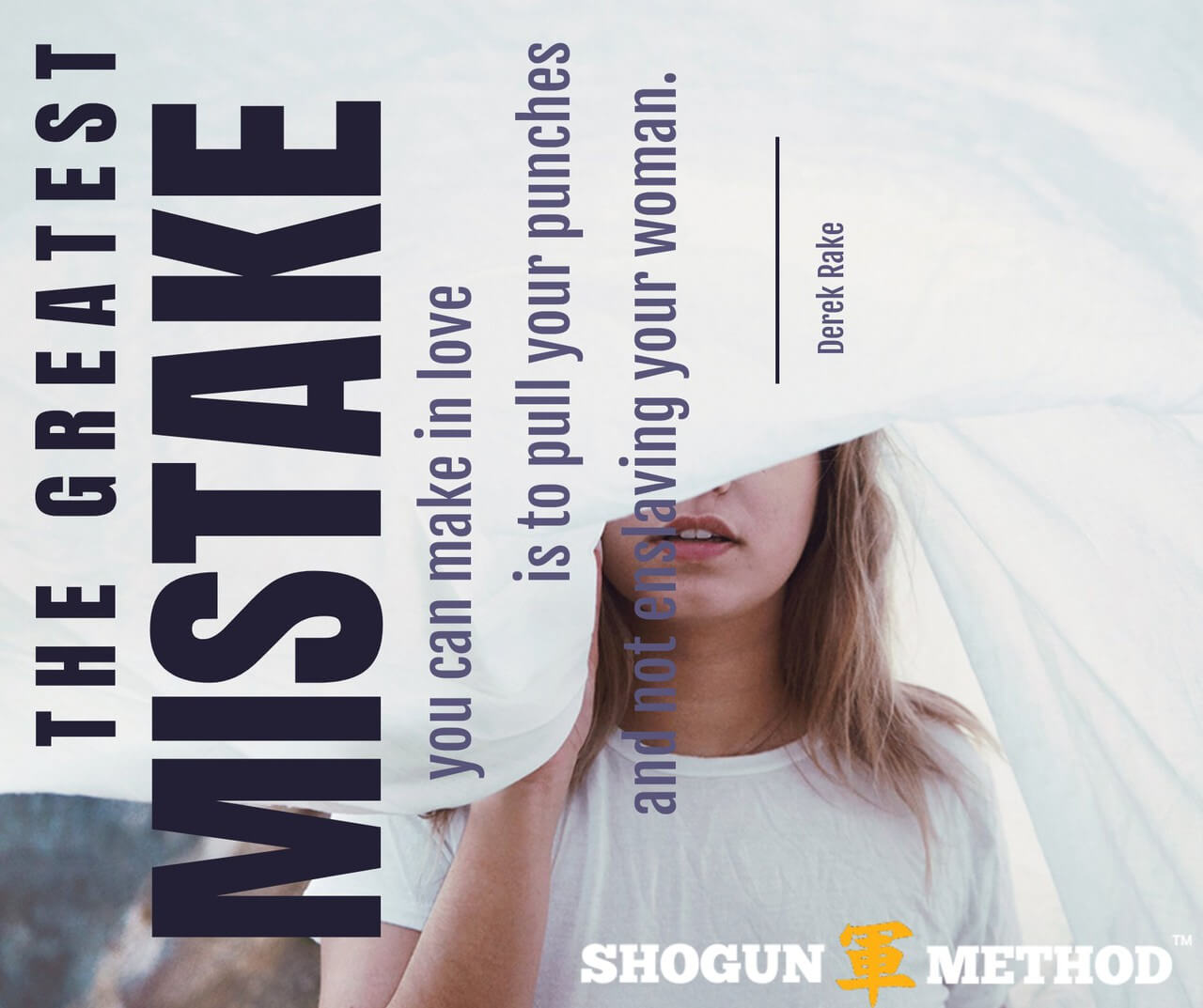 You Have To Manipulate Your Way To Love

It’s this – realize that love isn’t a spontaneous chemical reaction that happens whenever the Gods decide.

You can (and should) manipulate your way to love, period.

Let me ask you this… does that thought make you uncomfortable?

If it does, then you shouldn’t.

Think about this: you’re using manipulation to make her feel loved and to build a great life together.

So the ends justify the means, right?

Once you’ve accepted that these manipulation tools are amoral (neither good nor bad), you have the right mindset.

Now you’ve got the mindset, the next step is to learn the “how-to” part of these psychological manipulation tactics.

Shogun Method is the only dating advice program in the world which is based on psychological and emotional manipulation. It will teach you how to be dominant with women by acquiring alpha male characteristics which are highly attractive.

(And if you’re familiar with the concept of the Dark Triad, yes, Shogun Method is also right up that alley.)

This line manipulates the prospect to think that he’s in full control of the choice that he’ll be making.

In short, the prospect thinks he came to the conclusion himself… and not through being strong-armed by a salesperson.

Heard of “illusion of control”? That’s what this is exactly.

Tell your woman she is free to pursue other romantic options… but predict unhappiness in her future.

The idea is to convince her that if she pursues other options, she will be worse off.

In negotiation, this called a BATNA – the Best Alternative To A Negotiated Agreement.

You want to convince her that her BATNA is worse than staying with you.

Do this by pointing out what she will lose if she leaves you. Tell her that other guys will pump and dump her. Exaggerate the worst case scenario and make it vivid.

To summarize, here are the two steps:

In fact, suffering hardships on the road to a common goal strengthen human bonds tremendously.

Here’s how you can manipulate a woman into falling for you:

Orchestrate some shared experiences for you and your woman.

Mix up positive and negative experiences. Take her on a roller coaster of emotions.

Keep boredom away by making life exciting for you as a couple.

And here’s the kicker…

Once you’ve dealt with her emotional outbursts and finger pointing, resolve the situation.

You’ll be her hero. And you will have bonded her to you like a newborn to its mother.

Sounds crazy? Yes. Is this effective? Sure hell it is.

Many years ago, hypnotherapists noticed a strange phenomenon happening to their clients.

There seems to be a quick shortcut to getting someone into hypnotic state quickly, and it’s this:

Keep taking her in and out of trance repeatedly.

Whenever she falls back into trance, it will be deeper than before.

This phenomenon is known as Fractionation.

And guess what? This technique works as well on women to make her fall deeper in love.

When used correctly, Fractionation will do this for you:

While the majority of relationships wane, her attachment to you will increase as the years go on.

As other couples drift apart, her love for you will deepen the longer you are together.

Warning: Fractionation Is NOT A Silver Bullet

I’ve got some bad news to break to you…

Fractionation is a huge subject that I can’t fully explain here because of space constraints. (This article is already pretty long as it is.)

It definitely isn’t some “routine” or “pickup line” you can learn in two minutes. Instead, it’s rooted deeply in the practice of hypnosis and extreme persuasion. (Fractionation is a cornerstone technique used to hypnotize women into falling in love.)

Here’s some good news, however.

I teach a free intro class on Fractionation (and other Mind Control tactics) for those who want to learn more.

All you need to do is click on the link below:

You’ll be taken to another page where you enter your email to enroll in the Online Masterclass.

After that, you’ll be ready to watch my Masterclass on using Fractionation on women!

P.S: Got any questions about using psychologically manipulative techniques on your woman? Post them below and I’ll answer them personally.