Is She A Psycho? Look Out For These Signs Of An Unstable Woman

“Hey sweetie!” she sang, bursting into the office like a candy-scented typhoon of sunshine.

“Cherith?” Wade asked, looking up from his desk. He was surprised, confused, and more than a little bit terrified. “What are you doing here, um, babe?”

“It’s cold out, so I brought you a hot lunch!” She beamed. “It’s almost your lunchtime, right?”

Wade started to ask how she knew what time he ate lunch, but thought better of it. “Gee, Cheri, that’s really sweet of you, but …”

“…I’ve got this lunch meeting today with my boss. I just can’t miss it.”

Cherith stared at him.

“After everything I’ve done for you, how can you say that your stupid lunch meeting is more important than me?” Cherith’s voice rose to a window-shattering shriek.

People were starting to peek out of office doors and over the tops of cubicles now. Wade sunk down into his chair.

“It’s that slut at the front desk, isn’t it?” Cherith positively screamed. “Are you fucking her?”

“You are, aren’t you? How could you? And after I made you lunch and everything!”

Cherith threw the basket she was carrying.

Containers of scalding soup flew out and exploded all over the desk, the computer, and Wade’s clean white shirt.

A strip of condoms that had been in the basket landed in the puddling minestrone.

“You fucking asshole!” she yelled, turning on her heel and storming back out.

Literally everyone in the office stared at her, then at Wade, then back at her.

“And fuck you, too, slut!” Cherith screamed and shot her middle finger at Suze, the receptionist, as she passed.

For a minute, nothing moved. Nothing except soup dripping off the desk.

All Aboard The Crazy Girlfriend Train

“The makeup sex was even hotter than the soup. Once I managed to get her to stop screaming, that is. Well, she kept screaming, but for different reasons.”

“I get the impression,” I said to Wade, “that she screams a lot.”

“On the dining room table. On the couch. On the stairs. On the hood of my car—1972 Mustang, by the way. Black with a white racing stripe.” He shot a finger gun at me. “She’s a screamer.”

“So, how much of that is actually the good kind of screaming?”

Wade didn’t have an answer to that. Not one that he shared with me, anyway.

“And how long have you and Cherith been together?”

“About a month, huh?” I repeated. I paused, thinking. Then I said, “Wade, I have something that can definitely help you.”

“It’s a Mind Control technique called Fractionation,” I went on. “It’s extremely effective in every case. And I’m going to teach you all about it.

“But first, I want you to do something, Wade.”

“Yeah?” He looked at me expectantly.

“Take a minute. Think about this whole situation. Then tell me something.”

“What’s wrong with this picture?”

READ ALSO: How To Be Dominant With Women

If you said “That bitch is freakin’ crazy!” then guess what? You are correct, sir.

All women have sociopathic traits.

(Yes, every single one of them. There are no exceptions at all.)

But some women really go above and beyond their sex’s call of duty. 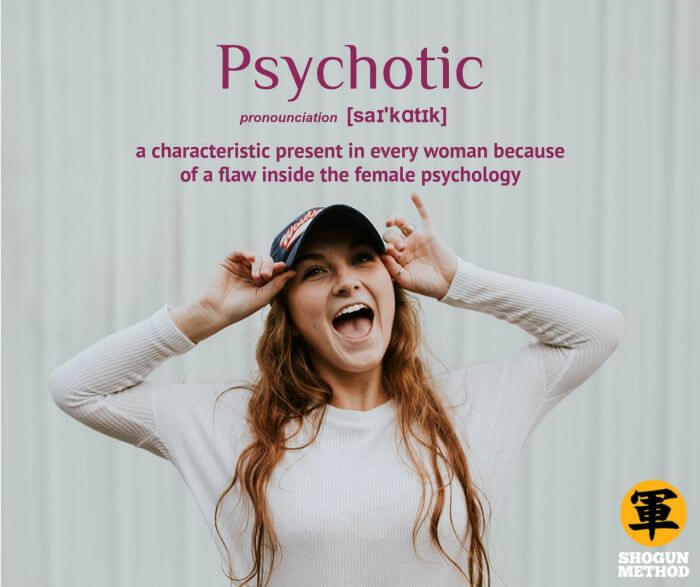 Whatever the situation, they’re willing to take things that extra mile.

And that was Cherith’s problem.

And it was also Wade’s problem.

Because he was dating a crazy woman.

Your poor bastard. I have some bad news for you.

Your girlfriend is also crazy.

Now, don’t be too hard on yourself.

Crazy girls will go to great lengths to make themselves desirable.

And once they’ve snared a guy, they’ll do damn near anything to keep him.

Believe me, they’re usually pretty good at convincing people that they aren’t crazy. For a little while, at least.

You, too, may be one of those guys whose “little while” isn’t quite up yet.

But you’re in luck. Because I’ve put together this handy guide. It will help you decide if your girlfriend has a more than a few screws loose. Or, maybe she’s just a girl with daddy issues. In any case, female psychology is screwed up anyway.

And to decide if you, like Wade, need to use a military-grade Mind Control technique (like Fractionation) to put her on a proverbial leash.

Before you knuckle down, it’s important to know exactly what you’re dealing with.

So, without further ado, here’s the definitive list of signs that your girlfriend is crazy.

Don’t kid yourself. Over time, many of these traits will get under your skin.

And you know what? It doesn’t matter how much you love your woman. Craziness is a wedge that drives you apart.

But only if you let it.

Cherith possessed most of the traits on this list. She was as psychotic as a woman could get. And she’s sure as controlling as fuck.

Let’s take a look at how things turned out between her and Wade, shall we?

READ ALSO: Dark Triad Seduction (What You Need To Know)

How To Train Your Girlfriend

“Oh, hey, Wade,” I said, maneuvering to keep from spilling my bourbon. “I didn’t see you there.”

“Hey sweetie, I’m back,” Cherith said, sidling up beside us. “Sorry I was gone so long, they were out of paper towels in the ladies room. Oh, hi.” She smiled at me. “I’m Cherith.”

“Likewise. Glad to finally meet this girlfriend Wade’s told me so much about.”

“Hey, Cheri,” Wade said, “Derek and I need to talk about some boring-ass work stuff for a second. Would you please go and get me another beer?”

“You bet, babe.” She smooched him on the cheek and sauntered off toward the bar.

I whistled as she went. “Well, holy shit. You’re sure that’s the same girl we talked about last week?”

“Unless the aliens replaced her with some kind of pod person. Which I kind of doubt.”

I nodded my approval. “Looks like you tamed that wild mustang, alright.”

Cherith returned, craning her neck over her shoulder.

“Did you guys see the ass on that waitress?” she asked, giving Wade his drink. “Damn. I’m not a lesbian, but even I want to bite off a piece of that.”

Over her shoulder, Wade bobbed his eyebrows at me. I winked back at him.

How To Deal With A Difficult (And Crazy) Girlfriend

Listen up, because this is important.

Your girlfriend may be crazy, but never fear. You don’t have to kick her to the curb.

Instead, you can transform her into the woman you want her to be.

And the woman she wants to be.

She just needs a little help. (Say it with me: because she’s crazy. Really, it’s not her fault.)

It’s what Wade did—and look at what happened.

No, she’s better than normal.

Can you believe it?

I almost couldn’t. But facts are facts.

It’s all because Wade took my advice seriously. He learned how to control his woman. And he used Fractionation.

So, what is this Fractionation?

In short, it’s an extremely effective form of Mind Control.

When it comes to crazy chicks, lots of guys go the emotional route. They try to be, ahem, understanding, and meet their girlfriends halfway.

Let me tell you, that’s a recipe for disaster.

I mean, we appeased Hitler, and look where that got us.

Seriously. Today there are Nazis running free in America.

Do you want that to happen with your relationship? For it to be trampled by crazed fascists?

Of course you don’t.

And that’s why you must learn about Fractionation, right here, and right now.

Leave that to lame-ass “Dating Gurus” and (shudder) “Pickup Artists”.

If Fractionation is not “seduction”, then what is it?

How To Put Your Crazy Girlfriend Under Control: Enslave Her With Fractionation

So, how does Fractionation work?

Here’s how: it takes a woman on an intense emotional ride.

You’ll put her into alternating states of happiness and sadness… repeatedly and rapidly.

As we have already seen, crazy women know (and love) drama, inside and out.

So, why not go ahead and give her drama? (The difference is that you’ll be the one who is in control.)

Go on. Put her through all those ups and downs, twists and turns. And then bring her back around again for another go.

And guess what? She’ll actually thank you for it. Well, she would, anyway. If she knew you were doing it. And that, my friend, is the secret sauce to dating a sociopath. You just out-sociopath her!

Best of all, you can use Fractionation covertly – anywhere, anytime. No one will be the wiser.

You can use it in normal, everyday conversations.

And when you do, everyone wins.

The goal of Fractionation is emotional addiction.

When done properly, it provides her with an intense rush that stimulates her body chemistry.

She’ll get to the point where she needs that Fractionation high.

And then you’ll have her right where you want her.

Because you’ll be the only one who can give it to her.

Believe me, she’ll do anything to get that next fix.

The effects of Fractionation are permanent. Once it kicks in, it’s forever.

It’s eternal. There is no “undo” button here.

Unlike traditional hypnosis, you can’t “snap” your finger and get her out of trance.

As such, it’s my responsibility to tell you this:

Use it only for good, never for bad.

Example of good, ethical use of Fractionation – properly civilizing a crazy woman like Cherith.

Example of bad, unethical use of Fractionation – deliberately harming a woman’s psyche because she has hurt you, and you want revenge.

So, promise me that you’ll use what you’re going to learn only for good.

Great. Then, all you need to do next is to click the link below and started now.

Follow the steps on that page and you’ll get to where you want.

PS: Questions? Comments? Do you have a crazy woman as your girlfriend? Let me know by posting below.