Are you worried about getting rejected by women? If you knew how to use female psychology, those worries would fade away forever… that’s pretty much a guarantee!

I’m going to show you how to fix a woman’s psychological makeup… so that women everywhere become your emotional slaves in minutes.

(This works even if you think you’re dealing with a female sociopath… or worse, a psychopath.)

First things first… it’s important for you to understand this so pay attention!

See, women aren’t necessarily rejecting a man because he’s got no hope whatsoever with women.

They’re rejecting him because he hasn’t learned that a woman doesn’t decide for herself who she’s attracted to.

This is something I discovered a while back. As it turns out, all women have so-called Attraction Buttons that, when pushed and prodded, will decide for them who they are and are not attracted to.

And you know what? They also have psychological loopholes that can be easily exploited.

Female Psychology Loopholes: What They Are, And How To Exploit Them

… you can make most women fall for you.

Make no mistake… this is powerful stuff. But what does it mean when I talk about “female psychology tactics”?

When I talk about the psychology of women, I want you to know this:

It’s your job to understand how a woman ticks – how she thinks, feels, perceives, reasons and deals with emotions.

This is so that you can manipulate her into doing what you want.

Without knowing the psychological makeup of a woman, it’s very hard to get what you want from her. She might think you’re not worth her time.

Hell, she might have convinced herself that you’re not for her.

As I’ve discovered, this can be fixed quite easily. Work on how to manipulate the female psychology, and you could well turn into the man of her dreams.

Warning: Messing With A Woman’s Psychology Can Be Dangerous

Before we proceed further, know this:

There should be limits to what you’re going to do with this information.

I trust you to use the advice in this article ethically. This is powerful stuff that can turn women into your emotional slaves. You know there are boundaries – don’t go beyond them.

Stay in the realm of what is, shall we say, permissible… and you’ll not only get the woman you want, you’ll also have a guilt-free conscious.

And trust me, that’s a good thing.

Any of these statements sound familiar?

“She’s driving me around the bend.”

“I literally can’t cope with her anymore.”

“One moment she’s up, and the next she’s down.”

I know. It can get pretty ugly. Who needs it?!

You know how it is:

She wakes up in a good mood. Then, something seems to set her off and she starts bawling at you!

Full of remorse, she then starts to cry and wants a hug.

Assuming you’ve been in relationships with women, you’ve already seen it in action. It’s turbulent and there are lots of ups and downs.

Men are logical, while women are so often emotional.

Trust me, this is a good thing for you.

Why? Well, emotions are so much easier to exploit than logic.

If a woman is too logical? She’ll smell your BS.

Fortunately, I’ve learned to not only decipher female psychology – I’ve also learned how to use it in our favor.

It’s these ups and downs that you need to be exploiting if you want to attract women.

Next, let’s dig into this right now with some female psychology mind hacks…

You need to be indifferent towards her and show her that you can survive just fine without her.

Trust me: this will drive her crazy.

If you get this right, her own desires for you will grow, and she’ll want to downright possess you.

Either way, your indifference will be unsettling.

If you give a woman too much attention, shower her with compliments and engage all the time? You’ll become her go-to guy whenever she needs her ego stroking.

Guys like the chase. Women? They get aroused by curiosity.

As such, they don’t respect a guy who is too into them. The guy who always telling them they look great, always being there for them, always at their doorstep? He’s a wimp.

What you need to do instead is pique her interest in you by being indifferent to her.

In this way, you’re building the anticipation. There is a bit of mystery to you, a bit of intrigue. You’re giving very little away, and that’s what’s going to keep her interested!

“But I’m not really powerful,” you might be saying.

It doesn’t matter. You are not who you think you are. You have the power to change. You don’t have to stay the same!

You see, not only can we manipulate women into changing the way they feel about us…

…we can also change our own behaviors, personalities, values and characteristics.

You know what? Changing who you are is essential if you want to be better with women. From now on, you need to position yourself as a man who has power and value.

Because this is what women want.

They want leaders, alpha males, and guys who stand out from the crowd.

Is there a reason male feminists are absolutely pathetic with women? Well, it’s because they’re so girly themselves. They’re full of “nice” and compliments and gooey behavior.

That isn’t what women want.

And you know what? It’s easier than you think to make yourself more powerful. It’s not hard at all. 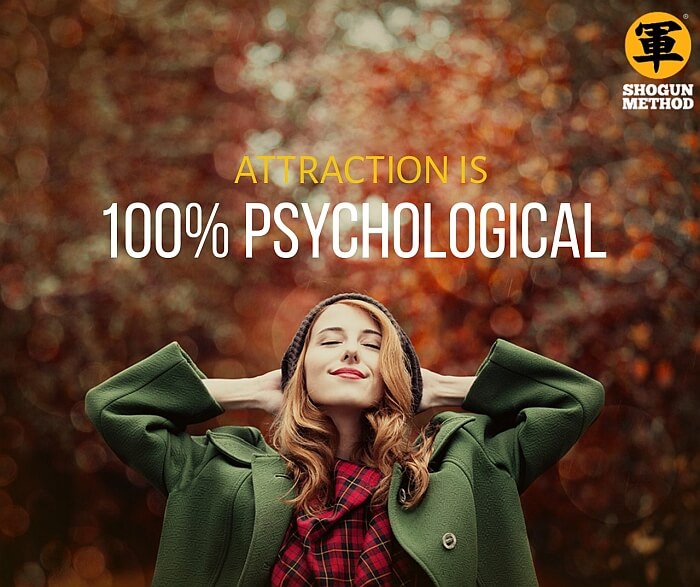 Here’s what you need to do – change your “values hierarchy”.

And here’s how to do that: first, look at what is at the top of your priorities list at the moment. If you’re like most guys, that would be health, career, travel and so on.

Replace that with power and confidence.

From now on, all your decisions need to be made with these two values in mind.

It all starts with confidence, and again this is something that can be learned and mastered.

How to start being more powerful and confident? Stop being a “nice guy”.

Mind Hack #3. Target Her Emotions, Not Her Rational Mind

I’ll level with you. Earlier I said that men are hard-wired to be logical, while women are more emotional.

However, women do use logic too, and they can be frustratingly rational creatures… sometimes.

This is one of the rare times when she uses the rational side of her brain… when she rejects you.

“He’s not for me… he’s just not handsome enough.”

“I just don’t feel anything for him.”

If you sidestep the rational part of her brain and target her emotional core instead, these excuses will simply vanish.

“He’s not that handsome, but there’s something about him that’s special.”

“He doesn’t have much money, but we’ll do fine together.”

“I don’t know why, but I can’t stop thinking about him.”

How To Manipulate Her Emotional Core

So, how do you access and manipulate her emotions then?

You do this by putting her through the proverbial emotional ringer:

If you do this correctly, here’s what’s gonna happen:

She’s left wondering what the hell is going on here.

Is it her? Is she to blame you?

When you’re nice to her, she’ll feel happy. Her emotional core would go: “I’m happy right now, and it’s because of him. He’s making me happy.”

In Shogun Method terminology, she’s anchoring her happiness to you.

When you start being mean to her, she’ll start to see your positive actions as even more positive than they really are.

This is what a Mind Control concept called Fractionation is all about.

Fractionation is much more than a “technique” or a “seduction trick”. It’s a female psychology principle that causes women to become addicted to you.

You reel them in, you push them away. It’s the seducer’s version of Jujitsu.

And before long, they’re hanging on your every word and following you everywhere.

Simply put, Fractionation is the easiest way to exert control, power and mastery over a woman.

If you get a woman to Fractionate enough times, she becomes devoted and addicted to you.

Really, there is nothing this easy to master that’s so powerful.

And you know what? Fractionation can also be used on ex-wives and ex-girlfriends. In fact, it can be even more powerful when used to get an ex-girlfriend or wife back because of one reason:

You have a wealth of past experiences with her which you can use to come up with super powerful Fractionation stories.

In short, you can attract her back using female psychology tactic like Fractionation rather easily.

To learn how to use Fractionation to control and dominate women, click this link below:

In the Masterclass, you’ll learn how to use Fractionation (and other Mind Control techniques) to quickly put women under your authority and dominance.

See you at the Masterclass!

PS: Questions? Comments? Leave them below. 🙂