Controlling Girlfriend? Here’s How To Know If You Have One (And How To Fight Back)

There are lots of awful things in the world.

But at the top of the list sits the most terrible thing of all.

Yup, you guessed it.

If you’re lucky, you will never have to deal with this dreaded beast.

If you’re lucky, you enjoy a life filled with things like:

If you’re lucky, you are the dominant member of the relationship—as you should be.

And if you’re unlucky—well, I truly feel bad for you.

Listen up, because you need to pay very careful attention. What I’m going to tell you here will change your life.

The Controlling Girlfriend: A Lesson in Female Tyranny

Bear with me, because first I want to talk about Herman Melville’s novel Billy Budd.

Billy is a civilian sailor on the ship Rights-of-Man. One day, his boat is stopped and boarded by the British navy. Billy is forced into military service.

As he’s taken away, Billy looks back sorrowfully. “Good-bye to you too, old Rights-of-Man,” he calls.

One tedious and very depressing novel later, Billy is falsely accused of conspiracy. He is executed by hanging.

Whoa. WTF does that have to do with anything?

Well, the plot of Billy Budd is an analogy for the controlling girlfriend.

Today’s navy is a kind and gentle one. The British navy of Melville’s day was straight-up authoritarian.

Sailors had very few personal rights. So few, in fact, that many had no choice about joining the military. They were basically slaves.

Beyond that, the royal navy demanded total obedience. Nothing more, nothing less.

If you didn’t like it, you were punished severely.

Maybe you were even declared a mutineer.

And then you died. 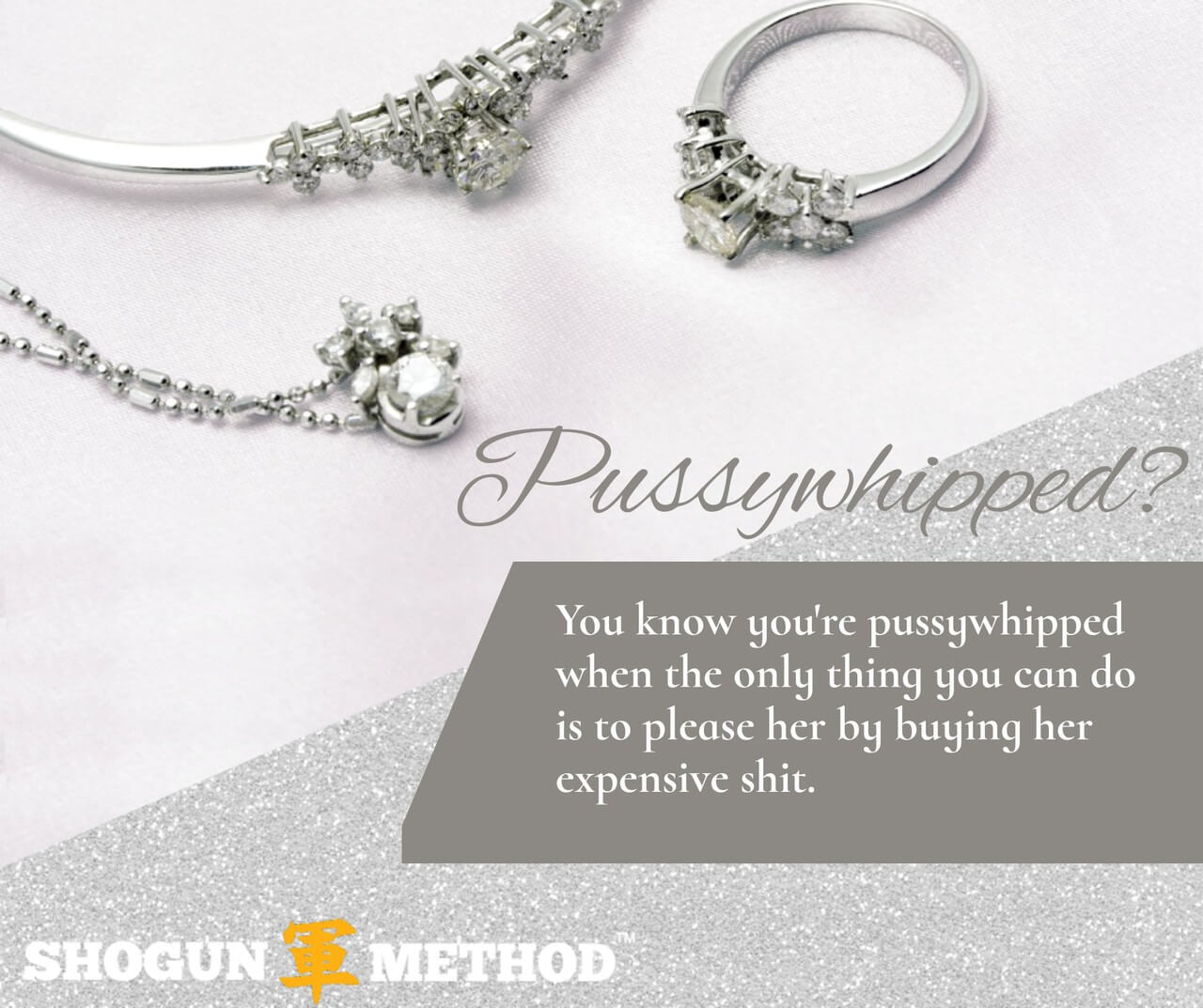 What Happens When You Let a Woman Take Charge? Nothing Good

In case you missed it, the controlling girlfriend is like the eighteenth-century British navy.

And you—you are Billy Budd. You poor bastard.

Unlike Billy, you probably entered willingly into a relationship with her. A female sociopath at that.

Unlike Billy, you probably had no idea what you were getting into.

Regardless, she’s got her claws in you now. For example:

Just like Billy, you have kissed the rights of man goodbye.

But not necessarily forever.

Because, unlike Billy, there’s actually something you can do about it.

27 Signs of a Controlling Girlfriend

The first step in escaping the clutches of the controlling girlfriend is being able to spot her in person.

Stop for a moment. Take a deep breath.

Be honest with yourself. Do any of these “controlling relationship early warning signs” describe your girlfriend?

No? Are you sure?

Because denial is very common among men dominated by their women. Very common.

Don’t try to rationalize her behavior. Just ask yourself: does she do this?

Are you starting to see it now?

Good. Admitting that you have a problem is the first step on the road to healing.

Submissive Men are Unhappy—and so are Their Women

You may be wondering: how do girls like this even have boyfriends? Why don’t the poor suckers just dump these chicks already?

They love their girlfriends.

It’s not entirely a bad thing. Everyone deserves love, despite their flaws.

Sometimes we can look past these flaws. Sometimes they’re harmless.

Other times, the flaws are too big to let slide.

And you know what? Being a control freak is, in a woman, one of those big ones.

You see, there’s a reason that female-dominated relationships are pure anger and misery.

Women, by nature, are not meant to dominate. They are not biologically, physiologically capable of being in charge.

Think about intelligent animals like deer or wolves or lions.

The leader of the pack will always display dominant, alpha male characteristics.

The female is always, always the submissive party. The males fight over her, and the winner claims her. Even in the physical act of mating, the female is in a submissive position.

In short, if a woman is truly in control, she’s out of her element. She can’t thrive. She certainly can’t be happy.

The same is true of you. If you’re not in control, you can’t prosper and be happy either.

(This is even more so with a specific type of female – girls with daddy issues.)

A cat in a swimming pool is not happy. It’s certainly not getting the most out of life by being there.

When your girlfriend is in charge, both of you are cats in a pool. You’re angry. You’re frustrated.

You’re both out of your natural element.

The truth is simple. No matter how much you love her, this sort of misery will lead to a breakup.

No romance can survive this sort of role reversal. End of story.

Want to reclaim happiness? Want to save your relationship?

Then get yourselves out of the pool!

How To Deal With A Controlling Girlfriend

Don’t get me wrong: I’m not saying that women can’t have their own lives and careers and aspirations.

But they’re not going to get it from controlling their relationships.

That is, quite simply, the man’s role.

But they’ve been brainwashed into believing that they shouldn’t be.

Hence, divorce rates have risen and marriage rates have fallen since the middle of the last century.

That kind of cultural trend is tough to fight against.

So what’s a boyfriend to do when his girlfriend won’t cut him any slack?

The answer is Fractionation.

No, it’s not a math problem. In fact, it’s the foundation of the infamous Shogun Method. (We’ll talk more about what this is later, but if you’re inclined, here’s an impartial Shogun Method review.)

In short, Fractionation is an extremely effective method of hypnosis.

And it is pretty much guaranteed to work. Every. Single. Time.

Fractionation takes advantage of women’s inherent affinity for drama. It exploits their emotional natures by taking them on a roller coaster ride of excitement and despair.

It doesn’t just make a woman like you. Fractionation makes a woman addicted to you.

By definition, an addict is enslaved by her addiction. She’ll do anything get her fix.

And, in this case, her drug of choice is the emotional high that only you can provide.

You see where I’m going with this, right?

Yes—Fractionation can revolutionize your relationship. This simple trick can put you back where you’re meant to be—in charge of your woman.

Not the other way around.

If you’ve read this far, you’re obviously committed to saving your relationship. You want to help your woman regain her lost happiness.

And, of course, regain your own.

I’ve put together an Online Masterclass on Fractionation. Its purpose is to help men like you save their relationships from domineering women.

So what do you have to do to learn the secrets of Fractionation? Easy… simply click the link below:

Once you’re on that page, follow the instructions and you’re all set.

P.S: Stuck with a controlling girlfriend? Want to break free? Post your question below and I will answer you personally.