How To Save Your Relationship From A Breakup

Derek, I need to know how to save a relationship, fast.

The lease was coming up on our apartment in 4 weeks.

I scoured listings all around the city, desperate to find a good place for the two of us.

But no matter what place I showed her, she found something she didn’t like.

Every day was a new argument: I had lost too much weight, I had gotten too friendly with her friends and she wanted them back for herself, etc.

Everything about me irritated her.

Men are not known to be very perceptive, but I knew we were close to breaking up.”

The above is a story my good friend (Henry) told me a few years ago.

Can you relate to what Henry was going through?

Has your girlfriend or wife’s bitching reached irrational levels recently?

Have you tried to hug her but she’s cold and motionless?

In a moment, I’ll share what happened to Henry and his long-term girlfriend, but first…

Let me share with you the best way on how to save a relationship from a break up.

Notice I said save a relationship… not fix one.

Many PUA goo-roos will tell you to “go after new pussy” rather than trying to get back with your ex.

And you know what’s weird?

For once…I agree with the PUA’s.

Re-seducing a girl is HARD. But saving a relationship is possible.

Notice I said simple, not easy.

You have to ignore every piece of bullshit relationship advice you’ve heard from the media.

Here’s what impotent “Dating Gurus” tell you to do (which you should NOT follow!)…

“Have a heart-to-heart talk with her!”

If you try this, your girlfriend will sit at the other end of the couch, as far away from you as possible.

Or she’ll ask you to sit on another piece of furniture.

The reason she’s drifted away from you is that you revealed too much of your true self.

Having a talk where you vomit more of your feelings will put the final nail in the coffin.

If you try to “talk her round” you’re using words to try to convince a woman. You’re trying to appeal to her logical brain.

“Think about her happiness!”

This fallacy of trying to make the woman happy is why so many modern relationships fail.

Your woman will feel whatever you feel.

If you’re fearful, she will feel it.

If you’re happy, she will be happy.

She gets her feelings from you.

So you have to consider your feelings because they will lead the relationship.

“Give in to her demands!”

Hell no. For two reasons:

So, what’s the answer?

First off, you need to unplug and reset.

Stop doing what you think is the “right thing to do”. Stop taking advice from your friends and family. And God forbid… from impotent “Pickup Artists”.

And I’ll share with you exactly what to do in a moment.

As I said earlier, very soon her heart will close to you and your relationship will be beyond repair.

So, now you know what doesn’t work, I’ll now give you the 3-step formula on how to save a relationship in crisis.

READ ALSO: Three (3) Signs Your Ex Girlfriend Is Not Over You

These three steps are taken from Shogun Method – the definitive guide to using the dark arts of persuasion and manipulation on women.

We’ll talk about Shogun Method later in this article. For now, let’s go through the three steps on how to save a relationship from an impending breakup.

The three steps are (in order):

In short, this strategy is known as “DCE” in Shogun Method terminology.

If these sound like a war strategy, you’re right.

This is how humans have conquered other races, other countries, and other women, for centuries.

Conquering and seducing have a lot in common. These tactics may not be politically correct…

…but guess what? They fucking WORK.

Now, here’s what the three steps are in greater detail… 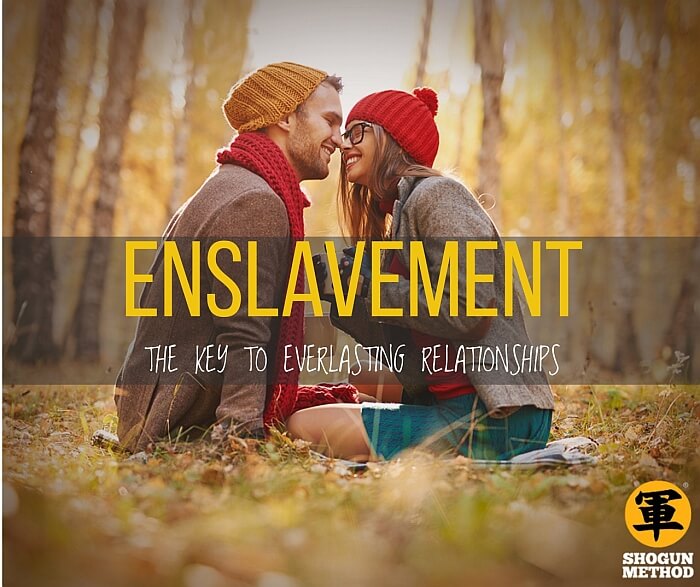 Up until now, you’ve been fighting the end of the relationship.

Just as in war, you surprise your enemy by throwing down your weapons.

All you need is one simple phrase:

She can’t fight you if you agree with her.

This one phrase will catch her off guard and send her mind spiraling with questions:

Once her defenses are lowered, you can plant seeds of doubt in her mind.

You do this using a Mind Control technique known as “Implanted Commands”.

We have a whole section on using Implanted Commands in the Shogun Method, but I’ll explain them briefly here.

To make a point:

Guy #1: What are you drinking?

We exchange information in the most efficient way possible.

Girl #1: What are you drinking?

Girl #2: Well, it’s this rosé wine I always drink when I want to unwind. The problem is, I promise myself I’ll only have the 2 glasses, but…blah, blah, blah.

If you can communicate with her the way she communicates with herself, you’re golden.

And you do that through using Implanted Commands.

Her conscious mind processes a whole sentence, but a small phrase within it slips unnoticed into her subconscious.

Your words become her thoughts.

(And that, my friend, is how to seduce women like a pro. You’ve got to be as covert and under-the-radar as possible.)

“I could tell you that you’ll regret this for the rest of your life, but I’m not going to do that.”

Remember, you’ve confused her by agreeing to take a break. Once she’s in that confused state, she’s prime for you to slip some Implanted Commands into her mind.

But it works, and it works like fucking gangbusters.

(There is a list of 44 Implanted Commands in Shogun Method which you use on women anytime. Just fast forward to Module 6.)

READ ALSO: She Lost Interest! How To Get It Back?

Imagine you’re a slave master and she is one of your farm workers.

But you’re not using food, money, or the threat of punishment to keep her devoted to you.

If this idea makes you feel queasy – get over it. It’s for the health of the relationship. And if you really love her, you’re doing her a favor by making her stay with you.

Something else I want to say:

This is how we differ from the Pickup Artists out there.

We teach Enslavement. It’s a whole other level.

Let me prove it to you.

We enslave her by using a technique we teach called Fractionation.

Fractionation is a mix of hypnosis, behavioral psychology, and good ol’ fashioned storytelling.

It’s used on you every day – even if you’re not aware of it.

Fractionation is when you build a connection with another person then break it.

And when you rebuild the second time, the connection will be much deeper.

There’s no limit to this depth. Every time you draw them back in – after pushing them away – the connection will be deeper than the last time.

And that’s how you enslave a woman emotionally.

You can Fractionate a woman with a gut-wrenching story…

…or you can Fractionate her with a one-line text message.

As long as you pull-push-pull, you’re doing it right.

This is something no other guys do. Not to mention impotent Pickup Artists and clueless “Dating Gurus”. (Even if they claim to do it, you can be sure that they’re doing it wrong.)

If you want to learn more about using Fractionation…

I’ve put together a FREE Online Masterclass that will teach you everything you need to know.

All you need to enroll in the Online Masterclass is to click on the link below:

Request Invite To The Online Masterclass

A new page will come up. There, just enter your email so we can send you the invite to the class.

I wish you all the best in turning your relationship around.

PS: Oh, wait! I almost forgot. What happened to Henry and his story at the beginning of this article?

Well, he didn’t use the three-step DCE strategy I’ve laid out in this article.

He thought it was too “drastic” for him. (I guessed that he was too chicken to try something like that.)

He didn’t use Fractionation.

He told his girlfriend he “would change”. He asked her for a second chance.

She left him two weeks later for a guy in their social circle of friends.

Experience is a harsh teacher, but it gives the best lessons.

READ ALSO: How To Catch A Cheating Spouse

P.P.S. Fractionation is powerful but it’s amoral. That means it’s only evil in the wrong hands.

If you’re a guy with good intentions… and if you only want to get things back to the way they were with the woman you love, you’re using Fractionation for good.

Click here to learn how to have a relationship that’s all love and no work.

PPS: Questions? Comments? Leave me a message below.