Is Your Ex-Girlfriend Over You? Here’s How To Find Out For Sure…

Want to know about the signs that your ex-girlfriend has moved on? Well, first tell me if this sounds familiar:

I have a friend (- let’s call him Dave. Every time I see Dave, he bitches and moans about some girl who dumped him years ago.

Me and Dave would crack a beer and he’d start talking about his ex, Dana.

(Dana dumped him rather unceremoniously… by text message.)

“Within three weeks she was posting pictures of herself on Facebook with her new boyfriend. Biatch.”

To this day he’s never gotten over it.

(I’m not surprised… shit like that will fucking scar you for life.)

There he was, planning his future, thinking about the wedding, house and baby…

…when suddenly she tosses him out of her life like he’s yesterday’s news.

This type of breakup can mess you up forever.

And if you’ve been dumped like this you’ll know what I’m talking about.

After a bad breakup every guy goes through five stages.

This is the part where you realize she’s moved on with her life.

That she’s not in love with you anymore…

…and doesn’t want you anymore.

But for some reason a lot of guys CAN’T do this.

I know how you feel…

You’re still in love with her…

Desperately want to get back together…

And refuse to accept she’s moved on…

But don’t feel bad. It’s not your fault.

If you could STOP thinking about her you would, right?

But no matter what, pictures of her run through your mind ALL THE TIME.

EVERYTHING reminds you of her…

…and all you can think about is how to make your ex want you back.

But nothing works, it’s like talking to a wall.

And you know what? This needy desperation is making you even more unattractive.

READ ALSO: How To Save A Marriage (By Using Mind Control On Her)

When You Just Can’t Move On

Most guys would get the message and move on… but you just can’t.

Instead you find yourself becoming more and more obsessed (to the point where it makes you feel ill. Yes, physically ill.)

Even worse, you’re becoming that guy who checks his ex’s Facebook dozens of times a day…

…and Google’s her name over and over again.

You know you shouldn’t do it but you just can’t help yourself.

And every time you visit her profile you see pictures that make you sick to your stomach.

But there’s a good reason why you’re acting this way.

You have to know if she’s moved on or not…

Is my ex-girlfriend over me?

Is she gone for good?

Does she still have feelings for me?

I miss my ex. What should I do?

How do I make her miss me?

Maybe we can get back together?

So, how do you know if your ex-girlfriend has moved on?

Eight (8) Signs Your Ex-Girlfriend Doesn’t Want You Back

Here you go… the definitive list of eight (8) signs that your ex-girlfriend has moved on:

BTW: here’s another way to find out if your girlfriend has moved on:

Ask a mutual friend if she thinks your ex still has feelings for you.

READ ALSO: How To Make Your Ex Miss You

When a guy realizes his girl is gone for good he goes on “full tilt.”

In his desperation he stops thinking clearly…

…and becomes willing to believe in anything.

Yes, anything that gives him a slight glimmer of hope.

And like 1,000’s of other lost and miss guided guys he stumbles across those dorky “Pick Up Artist” (PUA) sites.

Do yourself a favor and avoid wasting your money on those phony gimmicks.

Trust me – you’ll only embarrass yourself and wind up feeling like a loser.

Besides, PUA tricks are useless as fuck.

(Do you really want to go out to nightclubs alone and do 1,000 approaches? Probably not, right?)

And when all’s said and done, here’s what you need to realize.

You CAN make your girlfriend fall back in love with you…

…and it doesn’t take cookie cutter “Get Your Ex Back” tricks.

(That stuff is for kids, you know, like the male version of what you’d read in Cosmopolitan, i.e. “10 Ways To Get Your Ex Back” crap.)

Or becoming a supplicating door mat.

Nope, there’s a far easier way. And you’re going to learn this next. 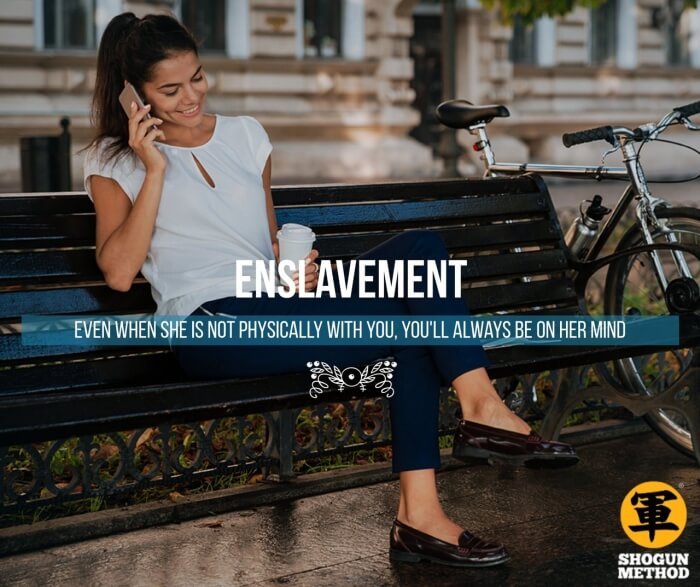 How To Get Her Back: Even If She Has “Moved On”

The method I am about to show you –

It’s only for guys who have the balls to do what it takes.

You see, you have to be willing to do anything to get her back.

Because what it takes is giving up on “conventional” cookie cutter tricks.

Instead, you will be using hardcore Mind Control techniques.

(If you’ve heard of something called the October Man Sequence, then what you’re going to learn will be somewhat similar to that.)

But before we continue I want to warn you.

This isn’t for everyone.

(A lot of guys get squeamish the moment they hear the phrase “Mind Control.” Pussies.)

Words and phrases like “manipulation” and “Mind Control” may sound a little more sinister than they are.

In fact, what I’m about to show you is just a set of advanced communication skills.

And people who are naturally persuasive use these techniques all the time.

I mean, have you ever wondered how some guys are able to make friends without even trying…

…and are liked by everyone wherever they go?

How do they become dominant with women, and stay that way?

It’s because they’re using these techniques (consciously or subconsciously). And they can be psychologically manipulative as fuck. You know those alpha male types…

And you know what? While this “Mind Control” stuff may sound complex, it’s a lot simpler than you think.

All you need is this easy-to-use thought manipulation technique I am going to show you next.

How To Make Her Crawl Back To You (With Mind Control)

With this technique, you can re-create a deep emotional connection with your ex-girlfriend in just minutes…

…and BRUTE-FORCE her to fall in love with you all over again.

And if you’re “playing for keeps” then this method can also be used to ENSLAVE her to you emotionally.

This technique is called Fractionation, and while I could explain it here, I’d need another 3,000 words.

(Plus, my hand is already starting to cramp.)

So, to make it easier for you and me, I’ve recorded a special Online Masterclass.

This Masterclass gives an in-depth explanation of how Fractionation (and a slew of other Mind Control techniques) work.

In the Masterclass, you’ll learn why Mind Control is so effective on women…

And how to use “forbidden” Mind Control techniques to make your ex fall hopelessly back in love with you.

In fact, she’ll beg you to be her boyfriend again.

So, you think your girlfriend has moved on? Listen to me and don’t give up hope yet.

It’s not too late because you’re reading this guide. (And yes, it works even if she’s gone with another guy.)

With Fractionation you can rekindle the fires of love.

And in case you’re wondering… this isn’t some creepy re-purposed Pickup Artist technique. Far from it!

When you are using this technique, it will seem as if you’re having a regular conversation. It will sound completely harmless and entirely natural.

(Except that in about 15 minutes she will be looking at you with brand new eyes.)

I’ve taught this technique to 1,000’s of guys over the years, and have an almost 100% run rate. So there’s every reason that it will work for you also.

You’re serious about getting your girlfriend back, right?

And you’ll do whatever it takes to make her come back to you, correct?

If yes, then request an invite for my Online Masterclass by clicking this link:

P/S: I’ve received a question from a DerekRake.com reader:

“These are the signs that your ex-girlfriend has moved on. What if she has got feelings for you still? What would those signs be?”

Well, the answer’s pretty simple – the signs would be directly opposite of what I’ve shared above –

Signs Your Ex-Girlfriend Isn’t Over You

P/P/S: Questions? Comments? Leave me a message below.