How To Make Your Ex-Girlfriend Or Wife Want You Back So, So Badly

Exactly nine years ago today, I lost my best friend.

His name was Ronald.

He killed himself by jumping off his apartment building.

Because his wife left him for another man.

Now, my regular readers know my posts are often lighthearted. I take my business seriously, sure. But I also like to inject a healthy dose of humor, too.

Because there’s simply nothing funny about what happened to Ronald.

And, unfortunately, that same thing happens to too many people every day, all over the world.

Breakup Depression Is Not A Joke

What makes people like Ronald decide to take their own lives?

It’s a question I asked myself for a long time.

The short answer is: hopelessness.

They feel like there’s just nothing left that’s worth living for.

Obviously, few people simply decide everything in the universe sucks.

And, too often, that catalyst is a failed or failing relationship.

A girlfriend breaks up with her boyfriend. A fiancée breaks off her engagement.

Or a wife leaves her husband.

Beth was the love of Ronald’s life. I will never forget how happy they were at their wedding.

In fact, I remember it vividly. I was Ronald’s best man.

Standing there at the altar, they were exuberant. There was a life full of love ahead of them. They would share with each other.

And then, too few years later, it was all over.

And it broke my heart that he couldn’t talk to me about what he went through.

Because I could have helped him—if only I’d known.

READ ALSO: How To Catch A Cheating Spouse

Everyone (Read:You) Deserve To Be Loved

I developed the Shogun Method for one simple purpose:

I want to improve people’s lives.

People need love. They need love from the people they love.

And that’s not always easy to get.

The Shogun Method is my way of helping them get the affection they desperately crave.

After all, it would have been selfish to keep these powerful secrets to myself.

It didn’t dawn on me—at least, not right away—that my work might actually save lives.

Even my best friend’s.

There’s nothing I can do for Ronald now. But I know there are others who endure the same agony he did. There are thousands of them, if not millions.

And if I can save even one of them from a bad decision, then it’s all been time well spent.

There are three major delusions that ruin rocky relationships. They are:

If honesty worked, we never would have invented lying. Sure, it sounds ugly. But the truth is never pretty.

There’s no such thing as altruism. If you’re with a woman, it’s for your own happiness—not hers.

And in a compromise, neither side gets what they want. What the hell is the point of that? At least one person should gain some benefit.

Now, here are the three real things you need to know about how to make your ex want you back or how to save a marriage:

Like I said, the truth is never pretty. That’s how you can tell it’s true.

Next, let’s go into each of these three ideas in detail…

“Get Her Back” Principle #1: Always Conceal Your Intentions From Her

Concealing intentions is a key teaching inside Shogun Method.

I made it a fundamental rule because it is so crucially important.

If you fail to practice it, you are doomed to failure.

The simple fact is that humans resist authority. We chafe at commands. We evade expectations.

And, although they may not always seem like it, women are most definitely human.

Thus, getting anything from a woman requires subtlety and guile. Women can’t be told.

No, they must be manipulated.

And, obviously, you can’t manipulate someone if she’s aware of your intentions.

(Or, if your wife is a female sociopath then she’ll already know what you’re trying to do.)

On the rocks with your girlfriend or wife? UNDER NO CIRCUMSTANCES should you say things like:

“I’ll do anything to make this work.”

“I only want us to stay together.”

“You’re the most important thing in the world to me.”

If you do, you’ve tipped your hand. It’s all over.

So, once again: never be honest with a woman.

She’ll see your endgame coming a mile away. She’ll swerve to avoid it. You will crash and burn.

So what are you supposed to do?

As I said, a woman will turn and run from a demand.

But she will wholeheartedly pursue something that is evading her.

Have no doubt, if she’s been pushing to split up, these will take her off guard.

They will defuse any possible argument.

And, if you’ve been resisting a separation, the change in attitude will definitely catch her attention… and keep her interested on what you’re going to do or say next.

Now you need to use that attention and interest to your advantage. Continue reading to find out how to do this next…

READ ALSO: How To Save A Relationship (Using Mind Control)

“Get Her Back” Principle #2: Manipulate Her Using Implanted Commands

You’ve read this far, which tells me one thing – your marriage may already be in critical condition.

Has your woman decided to leave you?

If she has, then you need to make her question that decision. You must break her resolve.

As we noted earlier, women resist commands. They’ll do the opposite out of sheer resentment.

But, as we’ve seen, women are highly susceptible to manipulation.

So, now you must create doubt in her mind about her decision.

When men doubt, we think logically and rationally. We analyze situations. We look for problems and pitfalls.

Guess what? Women don’t do this.

Women think emotionally and intuitively. This is especially true about relationships.

Only later will women look back and use logic. And even when they do, it’s only to justify whatever decision they’ve already made.

In short, reasoning with a woman is futile.

Again, the key to success here is manipulation.

And the best way to do this is by using a Mind Control technique called Implanted Commands.

Implanted Commands: Psychological Tricks To Get Your Ex Back

Women react against a command because they see the command for what it is.

The trick is slipping the command into her mind without her realizing it.

And guess what? This is not nearly as difficult as it might sound.

Implanted Commands contain instructions that you want a woman to follow. So, if you can state what you want, you’re halfway there.

The trick is using other, innocuous phrases to camouflage your commands.

This will prevent her from recognizing the command. As a result, it will slip into her subconscious.

There, it will go to work sowing confusion and doubt.

Let’s look at an example, alright?

In this case, she needs to doubt her decision to leave. Perhaps we want to play on her fear of loneliness.

We want to make her think: “Leave me and you’ll find yourself alone.”

To camouflage this command, we could use the phrase: “Imagine what would happen if…”

So, the Implanted Command in full would be this –

“Imagine what would happen if you leave me and you find yourself alone.”

Here are a few more examples –

“Sure, I could tell you that it’s pointless to look for a better guy. But I won’t.”

“I’m wondering if, eventually, this decision will turn out to be a mistake. I guess there’s only one way to find out.”

“Don’t think that this means you should have second thoughts about your decision. You know that you need to stand by your commitment.”

Of course, you can use Implanted Commands to dangle a carrot, too.

“As time passes, you might wish for the safety and security we can have together.”

In this case, you’re prompting her to long for the stable, positive aspects of your relationship.

You can also try:

“I’m not going to try to make you remember all the good times we had together.”

“It’s a shame we’ll never find out if we’d actually be truly happy together.”

“You may get hung up on everything we shared together. Try not to obsess over it.”

Sure, these might seem counter-intuitive. Remember, she’s not analyzing these statements rationally.

Instead, she’ll think that the Implanted Commands are coming from her own subconscious. She’ll hear them in her own voice, not yours.

In short, she’ll have no impulse to resist them.

Control a woman’s imagination, and you will control her—completely and utterly.

READ ALSO: “I Love Someone Who Doesn’t Love Me Back. What Do I Do?”

How To Get Your Ex Back… And Enslave Her For Good

Up until now, we’ve been talking about psychological manipulation.

But what we need to talk about now is pure Enslavement. 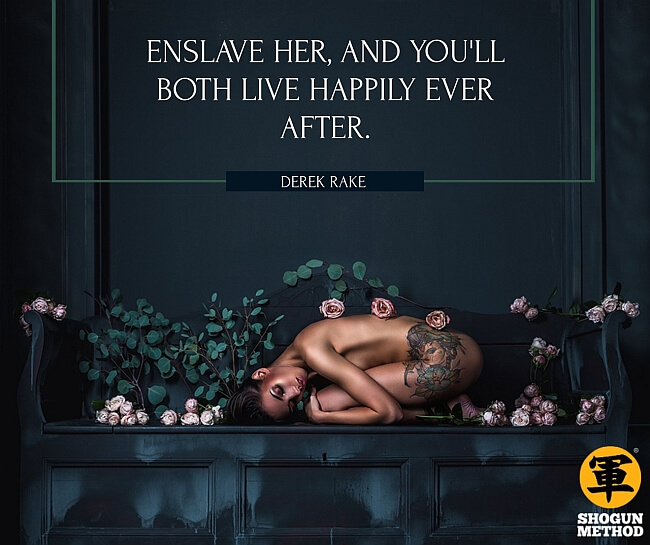 Let me ask you this:

Do you truly want to salvage and safeguard your relationship?

Boyfriends and husbands, this is the only way for you to achieve true romantic security.

And it is guaranteed to succeed.

What I’m talking about is called Fractionation. It is a cornerstone technique used extensively in the Shogun Method.

Fractionation involves putting a woman into a trance. Then you pull her back out of it again.

This is achieved by alternating between positive and negative emotions.

You anchor the positive emotions to yourself. The negative ones get projected onto the outside world.

And you swing back and forth, repeating this process multiple times. This sort of dramatic emotional rollercoaster ride resonates strongly with the female psyche. This works even better if she has shown traits of narcissism or sociopathy. (You know, the female equivalence of a Dark Triad male.)

Inevitably, she’ll become addicted to the positive rush she gets from being with you.

An addict will do whatever she needs to get her fix. She’ll rearrange her entire life if it means easy access to that emotional high.

And that’s the secret to a successful relationship.

How to make your ex want you back so bad? Simple answer: use Fractionation.

Read all the way till the end for a free resource on how to use Fractionation on women.

You Can Get Her Back… But You Must Act Now.

In a sense, we’re all emotional addicts.

We all need that positive rush we get when someone loves us.

We all go into withdrawal and depression when we can’t get what we need.

Fractionation is how you get it. It’s easy. It’s effective.

And, should you choose, it’s permanent.

It hurts me, each and every day, that I was never able to share this with Ronald. Fractionation could have saved his marriage.

More than that, it could have saved his life.

And there are plenty of people in the world who share his woes.

Today, I’ve decided to do something about it.

There are too many troubled souls whose lives are bereft of love. People who think despair’s only alternative is death.

I will never be able to reach them all individually.

And that’s why I’ve put together an Online Masterclass on Mind Control techniques (including Fractionation).

Are you someone contemplating suicide because of romantic troubles?

I have one word for you: DON’T.

Instead, take some time off to watch this Online Masterclass. Learn how Fractionation can help you.

I promise, this is the solution you need.

P.S: If you have any questions for me, post them below and I will answer you personally.