You’re on a boat. It’s a warm, sunny day out on the lake. And half-naked men and women are everywhere – drinking, swimming, chatting…

And then suddenly, you spot a gorgeous blonde smiling at you from across the deck.

He walked over to her and struck up a conversation. He felt instantly connected with her. She seemed to love everything he said. The look in her eyes seemed to whisper “Fuck me!”

It was as if everything clicked and he knew all the right things to say. James left that boat party with Anna’s phone number.

Excited to get together with her again.

As you might guess, they went out a few days later.

And guess what? Something changed.

This was a different woman. Anna didn’t seem to be interested in James at all…

What happened? Where was that “Fuck Me” look she was giving him on the boat?

My buddy James knew I’d done my homework when it comes to women. 🙂

He came to me for help:

“Derek, what did I do wrong? She really seemed to be interested at first. How do I make her interested in me again?”

“Women are crazy, my friend. And you didn’t do enough to make her desire you.”

If you’re already well versed in Shogun Method, then you already know the answer…

But for a woman to feel attracted, you need to trigger her emotions. It’s like pushing a button.

Trigger the emotion, and she’ll feel attracted to you.

It’s as simple as that.

This is why women behave differently in different times and under different situations.

See how this applies to Anna.

She was “hot” towards James on the boat because her emotions were triggered. Perhaps by his charm… or the fact that she was on a boat… or the caviar bruschetta that she just had.

On the other hand, she was as cold as a cucumber during the date with James. Why?

Maybe she had a bad day. A car ran over her poodle, perhaps?

A more tangible explanation would be this:

James had failed to trigger her emotions.

My advice to him:

“There was all kinds of excitement on that boat. She was already hot with emotion.

You just got lucky.

But then you got her off the boat, and out of that environment. You needed to trigger that emotional attraction button again.”

Of course, he wanted to know how to do that.

After all, if you know how to get a woman to want you, all your love and relationship woes will be over in a snap, right?

How To Get Any Woman You Want

When you know the right things to say and exactly what to do, you can…

This is where military-grade Mind Control and psychological manipulation techniques come in. All packaged in a simple formula called the Shogun Method.

We’ll talk more about the Shogun Method in a while, but here’s what you need to know first…

It’s not your grandpa’s old PUA (Pickup Artist) tricks. In fact, if you’ve been in this game for some time, you’ll realize that PUA tricks are as useless as a pair of tits on a 80-year-old nun.

Don’t get me wrong. Sure, that shit works to distract a woman for a few minutes. Might even get you laid, if you’re lucky (and she’s desperate).

Now, you may want to take the PUA path by dressing up like a fool and going out picking up girls with your “wing-man”. If you like trying to impress gullible women with your cheap pickup lines, no need to read any further. This isn’t for you.

If you really want to make a woman yours and KEEP her, you’ve got to get pretty fucking serious.

In other words, you can’t do this half-heartedly.

Continue reading if you are, because your life is going to change right now. 🙂

How To Make A Woman Want You (In Four Simple Steps)

This is the perfect recipe for creating your relationship exactly how you want it to be. This is the most definitive “how to be attractive to women” advice you’ll find anywhere, period.

Here’s the bottom line: if you want to make a woman want you, there are specific stages that you’ll need to follow.

First, intrigue her – she’s looking for novelty and amusement, so give it to her.

Then, create some rapport on top of the intrigue. Forget the Pickup Artists’ way of forcing rapport (it doesn’t work). Shogun Method shows you how to let a woman seduce herself for you (more on this later.)

Build attraction by enticing and repelling her simultaneously.

Most guys make the mistake of only ENTICING a woman – you’ll need to REPEL her to make her attracted to you. (Again, we’ll show you how to do this.)

Everyone has a heart attack when they hear that last one. I get it.

Slavery is despicable. Morally reprehensible. Not to mention illegal.

If you want to KEEP a woman for the long term, then emotional enslavement is not optional.

It’s the only way to make sure that connection you have is never broken.

These four steps comprise the IRAE Model (Intrigue-Rapport-Attract-Enslave) inside the Shogun Method.

We’ll talk more about the IRAE Model later, but for now, I’ll let you in on a secret…

READ ALSO: How To Keep A Woman Interested In You (With The Barnum Effect)

The Truth About Women That Nobody (Wants To) Talk About

Women WANT you to enslave them.

They want to be with a man that takes the lead and dominates.

Of course, on the surface a woman would say otherwise…

That’s hogwash. Deep down, she wants YOU to hold the authority over HER. She wants you to be DOMINANT over her. This is the ONLY way she’s going to be happy.

This means that the final step of the IRAE Model (Enslavement) is the key to making a woman want you… for the long term. 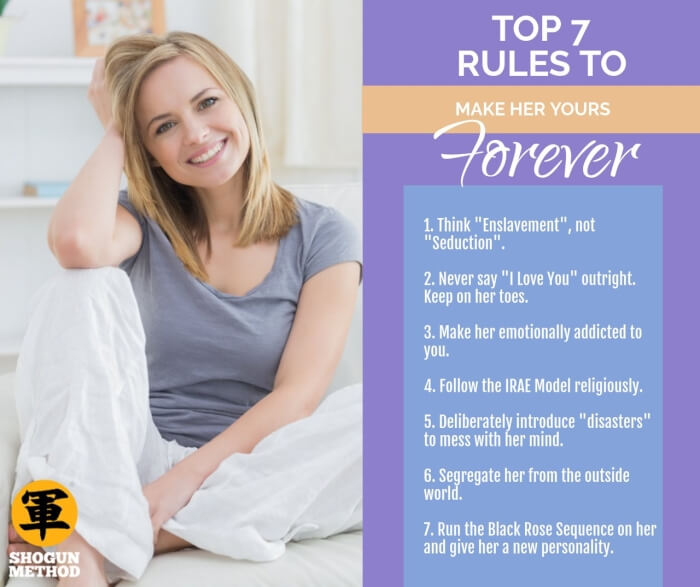 The Linearity of the IRAE Model

Here’s the thing about the IRAE Model…

For it to work, you must follow each of those steps in that order.

Screwing up the order will result in disaster:

And don’t even think about trying to enslave her without the other steps, or she’ll call the police!

Following the IRAE strategy will ALWAYS get her hooked!

(By the way, this process also works on an ex-girlfriend or wife. If you want your girl to want you back after she left you, then follow the same strategy.)

Just imagine how good it feels when you finally get her in the bag… forever.

How To Make Her Want You In Bed

I receive these kinds of questions regularly:

“How to make a girl want you sexually?”

“How to make a woman want you in bed?”

“How to make her want me if she’s already married?“

“How to make a woman want to sleep with you?”

“How to make a younger woman want you?“

“How to make her sexually addicted to you?”

To make a woman want you sexually, you must make her want you emotionally first.

No point “seducing” a woman and bang her once before she dumps you. (Unless, of course, a one-night-stand is what you want.)

Therefore, to make a woman want you sexually, put her through the IRAE process.

Once she is enslaved to you emotionally, then she’ll pretty much be compliant to you physically.

READ ALSO: How To Save A Marriage (From An Imminent Divorce)

How To Enslave A Woman Forever

We are nearing the end of this guide, and I want to leave you with a technique for you to kick-start the Enslavement process with her.

Big word, I know. James had to say it slowly a few times when he first learned it from me. 🙂

Despite its name, Fractionation is quite simple.

It’s the process of taking a woman into and out of a trance. And you do with her over and over.

It’s a way of making her want you… and then making her a little unsure of herself.

Over time, you’ll be connecting and disconnecting with her repeatedly.

And the results? It drives her crazy with desire.

And that’s exactly what James did.

He ran into Anna again at another party. He got her attention and used the IRAE strategy…

She never saw it coming, and long story short – she was hooked.

With the IRAE Model, James had triggered her emotions, and pushed all her hot buttons.

With a huge grin on his face, James came to me and said:

“Derek! I owe you, man! We’re getting married next summer!”

I’m glad for him. And yet I knew that he would be successful because of one reason:

And guess what? You can learn it from me today.

How good does that sound?

But first I have to warn you. It’s not for everyone.

In particular, Fractionation is not for you if you are one of these guys –

So here’s the deal…

If you want to be the man in your relationship…

If you want your woman to be helplessly under your spell…

…then this is my invitation to you:

Below is a link to our legendary Mind Control Online Masterclass. That’s where you will learn how to use Fractionation to make any woman your emotional slave!

Follow the instructions on that page. You’ll then be taking the important first step to tremendous success with women!

Keep this in mind:

This Online Masterclass is for ethical and responsible use only.  This information is only for improving your dating life and your relationships.

So, do this for me right NOW:

First, promise that you have only the best intentions for the woman that you’re going to use Fractionation on.

Then, go ahead and click this link to get started.