Question! Do you have a nagging feeling your girlfriend is cheating on you?

Don’t blame yourself if you do. It’s not your fault, and I’ll tell you why in a short while.

Getting cheated on by the woman you love is one of the most fucked-up things you could ever experience in life.

Sadly, too many guys never confront their women about their suspicions. Instead, they just:

…and end up getting cheated on anyway.

Meanwhile, smarter guys actively try to fix the problem. If you’re reading this guide, chances are that you’re one of them.

David was a middle-aged journalist I met recently. And here’s his story…

He had been dating his much younger girlfriend, Jen, for several years. They worked in the same media company.

David was a field reporter, and he was often out of town for days on assignment. Jen was a secretary for one of their higher-ups back at headquarters.

Recently, David had been suspecting that she was having an affair with her boss. So a few months ago, he came to me for advice.

David gave me a list of his observations which led him to believe that she was cheating on him:

“I’m worried because Jen has had at least a dozen boyfriends before me,” David explained.

“So, as much as I want to trust her, I think I’d be an idiot to assume she’s completely loyal to me.”

A Woman’s History Is Indicative Of Her Future Behavior

David’s right. And he’s not being sexist or misogynistic.

After all, studies have shown it…

The more past lovers a woman has, the more likely she’ll cheat on her current partner.

So, no, I didn’t judge David. And I don’t judge YOU if you have similar suspicions with your woman.

And yet at the same time, I won’t pull any punches. You have my word on that.

In this Shogun Method guide, I’ll tell you what I told David that day…

…and if you want to keep your woman from cheating and be happy with you again, be sure to read ‘til the end.

Ten Signs Your Girlfriend Is Cheating

David just gave you some of the tell-tale signs of a cheating girlfriend:

…and everything you’re doing so far isn’t working…

…then you MUST do something fast.

Wait too long, and she WILL leave you and hook up with another guy. It’s just a matter of time. Believe me, it’s true!

There’s a right way and wrong way to stop your girlfriend from cheating.

Do it wrong, and you give her an excuse to paint you as the bad guy and leave you.

But do it right, and she won’t only stop cheating…

And that’s not all… your relationship will last as long as you want it to.

First, let’s talk about what NOT to do…

Things That Will NOT Stop Her From Cheating

…then I think I know why:

No offense to Ms Winfrey, but “Oprah advice” is what I call the “feelgood” nonsense that gets people clapping.

But guess what? They never really work.

…and she’s STILL drifting away.

Why She Cheats On You (The REAL Reason)

She’s not cheating on you because she doesn’t like what you’re DOING.

She’s cheating on you because she doesn’t like what you’re BEING.

To be more specific…

You’re NOT what she really wants in a man. And that’s why she’s looking elsewhere for it.

What does she want in a man?

She wants a strong, dominant, “alpha male“-type guy she can gladly follow to the ends of the Earth.

And when you treat her better, or make her your priority, or any of that drivel… guess what?

You’re basically telling her you’re NOT that guy.

After all, with all the kissing-up you’re doing, she can’t help but feel SHE’S in charge. Not you.

So, don’t ever make that mistake!

Instead, you’ll need to do something else. Something that actually WORKS. And something which is MILES AWAY from the bullshit “Oprah advice” that you’ve been getting.

READ ALSO: How To Train Your Wife (And Turn Her Submissive)

How To Stop Your Girlfriend From Cheating

After all, take a closer look at what you’re doing. Treating her better, making her priority, making her laugh…

And there’s a scientific reason why guys who court a woman tend to get rejected 80-95% of the time.

Mother Nature has hard-wired the female brain to reject direct proposals from guys.

Likewise, directly try to stop her from cheating… and guess what happens? You’ll get rejected.

So, you’ll need to do something different.

The Anti-Cheat Antidote That Really Works

And you’re about to learn that approach today.

Hypnosis techniques work by bypassing your woman’s logical defenses. It goes straight into her subconscious by appealing to her deepest emotions.

As a result, she won’t reject or resist you… but instead comply with you wholeheartedly.

That’s why hypnosis these days is such a powerful cure for:

…and other equally fucked-up things. 🙂

And guess what? It’s hypnosis that’s going to make your girlfriend stop cheating on you.

The hypnosis technique you’ll be using in this case is called Fractionation. 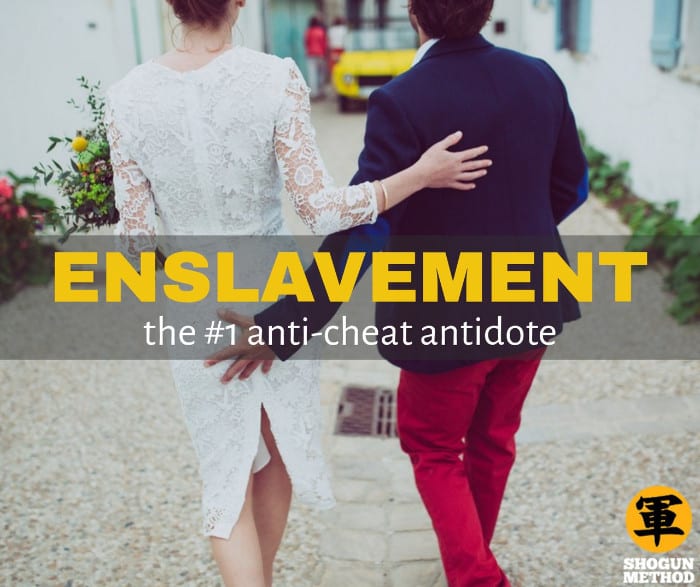 Fractionation is a hypnosis technique that uses storytelling. The goal is to put a woman on intensifying cycles of pressure and relief.

The result? She snaps out of her bad behavior and becomes more open to listening and following.

How David Got Jen Back (With Fractionation)

Remember David story that I told you earlier?

Using Fractionation, he did the following:

…and yet you know what? Jen absolutely LOVED it.

In fact, she loved the new David so much that she quit her job. (Presumably to end her affair with her boss.) She now travels with him whenever he gets sent out on assignment.

She had switched back into the sweet, loving, respectful woman David fell in love with. Even better, they have regained the trust in each other which had lost when she started cheating on him.

And it’s all because David became exactly what she wanted in a man:

Strong, dominant, and firmly in charge of the relationship.

Want your girlfriend to stop cheating and stay with you for the rest of her life?

Then do the same thing David did. Become the kind of guy she’d GLADLY spend the rest of her life with.

And Fractionation is your key to all that.

Here’s a piece of good news…

You can master Fractionation TODAY at my Online Masterclass. Click on this link below right now:

Once you’ve clicked the link, a signup form will appear. Enter your email address because the Invite is emailed to you (if you qualify).

Remember this because it’s important:

If she’s cheating on you, it’s because she doesn’t see you as the strong or dominant enough.

This means that you can’t stop her from cheating by talking to her or treating her better. Why? Well, because it makes you look weak. And no woman wants to be tied to a weak man.

Follow what works and win her back. Learn Fractionation now.

PS: Comments or questions? Leave me a message below.