It’s a question as old as the human race itself.

How do you make a woman happy?

We’ve been told that women need to have lives outside of their relationships and homes.

Sure, this provides them with a sense of fulfillment and accomplishment.

But does it make them happy?

As we’re all aware, the answer is a firm no.

Here’s an important secret: most women don’t realize that they are not in control of their own happiness.

No, making a woman truly happy is something that only a man can do. It’s true.

Unfortunately, most boyfriends and husbands don’t realize this either.

In the end, it leads to unhappiness all around. The man ends up alone, dumped, and disappointed.

And his woman? She goes off in search of a man who can make her happy. And she, too, ends up disappointed again.

How can you stop this from happening? How can you make your beloved wife or girlfriend really, truly happy?

Well, you’re in luck. Pour yourself a drink and kick back, my Shogun Method padawan.

Because I am going to show you how it’s done. And you’ll learn how to do it differently.

First, let me tell you a story…

The Story Of Liam And Karla

Karla hadn’t even set her bag on the chair beside the door when she asked, “Liam, have you started dinner yet?”

Liam looked up from his magazine. “Dinner?” he asked, puzzled.

“Yeah.” She stopped and stared at him. “Dinner. You know, that stuff you put in your mouth and then it goes down into your stomach. Dinner.”

“Karla, I cooked last night,” he replied. “Isn’t it supposed to be your turn?”

Karla didn’t just set her bag down, she threw it into the chair, which rattled a little. “I just got home from having class all day,” she said with a scowl. “I’m tired and I need to cram for an exam tomorrow.”

“I don’t have time to make dinner every night!” she snapped.

“But I cooked last night! Didn’t we say, back when we moved in together, that we’d share these kinds of responsibilities?”

“Liam.” Karla’s voice was icy. “You sit around all day smoking weed and making up stories.”

“And you’re not even a good enough one to pay the bills!” she spat. “I’m going to med school so I can support you. Although I’m seriously starting to wonder why. The least you could do is put forward a little effort.”

“Don’t bother,” she said, picking up her bag again. “I’ll just order a pizza.” She stormed off down the hall. “I have to study. Call me when it gets here.”

Their bedroom door slammed shut behind her.

READ ALSO: How To Deal With Strong, Independent Women

What Makes A Woman Unhappy?

Obviously, Liam’s girlfriend is not happy. Not by any stretch of the imagination.

So, what’s the problem?

Is it that Liam’s a slacker?

No, that’s not the case. Liam works hard. He holds up his end of the deal with housekeeping and chores. But look where that got him.

Is it that Liam isn’t the household breadwinner?

Nope. Plenty of women are more successful professionals than their boyfriends and husbands. That, by itself, doesn’t foreclose on achieving happiness together.

Is Karla’s stress level the problem? Is she frustrated with school and taking it out on Liam?

Well, med school is stressful, but that isn’t what’s ruining their relationship. Not by a long shot.

The problem is Liam’s attitude toward his relationship.

And you know what? If you’re trying to make your woman happy, this is the wrong approach entirely.

Realizing this fact can be difficult for men.

But, as Liam learned, I’m here to help.

If You Don’t Fix This Problem, She WILL Leave You

“I’ve tried talking to her,” he said, wrapping up the tale. “But she won’t open up to me. She just blows me off. I’m worried that…”

I finished the thought for him. “That you’re caught in a downward spiral. Right?”

“Yeah, exactly. I mean, I don’t know how to save this relationship. It’s only a matter of time before she leaves me.”

“Liam,” I said, leaning back and folding my hands behind my head, “That’s only a symptom of your problem.”

“No.” I shook my head. “That you’ve resigned yourself to the fact that she’s going to leave you.”

“What else can happen, if things keep up this way? The relationship is getting really toxic and it kills me.” He buried his face in his hands. “I don’t know what else to do.”

“Easy now. You’re trying to fix things, which is good. You’re just going about it the wrong way.”

How To Make Your Girlfriend Happy: By Making Her Submissive

“Alright,” I said, “Here’s the deal: talking to her about why she’s unhappy is pointless.”

“But,” Liam stuttered, “but everyone says that communication is important for healthy relationships.”

“That is very, very true,” I agreed. “But in this case, it’s still pointless. Because Karla doesn’t actually know why she’s unhappy.”

“And you do?” He seemed skeptical.

“But of course. It’s my job, after all.” I grinned. “The reason she’s unhappy, Liam, is because you’re letting her dominate your relationship.”

Liam sat and thought about that for a minute.

Finally, he said, “My question still stands: what am I supposed to do?”

“Isn’t it obvious? You need to take back control. You need to be the dominant member of the relationship. And you need to make her be submissive to you.”

“Oh, no.” Liam’s eyes were wide. “That’s not going to work. She’s very progressive. If I try something like that, she’ll definitely leave me.”

I couldn’t help but laugh. “Liam, my man, your head is still in the wrong place. Now, let me tell you a little secret…”

The Biggest Flaw In The Female Mind

“But first, let me ask you something,” I went on. “What’s her favorite kind of movie?”

He answered without hesitation. “Chick flicks. Romantic comedies. That kind of stuff.”

“And how about you?”

“History documentaries,” he told me.

“Let me guess: in your time together, you’ve sat through way more chick flicks than she has documentaries. Am I right?”

“Do you know why she likes chick flicks?” I asked.

He shook his head again.

“Women are emotional animals,” I said. “Now, I know Karla’s smart and studying to be a doctor. But when it comes to women’s personal lives, emotion trumps reason every time.”

“Now, tell me: what do all chick flicks have in common?” I asked.

“Yeah, but what happens before that?”

“Well, there’s always a conflict that causes a bunch of drama.”

“Exactly!” I snapped my fingers. “And that, my friend, is the key to your problem.”

READ ALSO: Are You Dating A High Maintenance Woman?

“Women want to empathize with the characters. And they love those ups and downs that the story puts them through.”

“Yup. And that’s the problem. Unhappy women don’t get sad. They get angry. And when that happens, they find ways to create emotional drama. And that, Liam, lies the key in understanding women.”

“So what you’re saying,” Liam said, skeptical again, “is that, if I want to make her happy, I need to make her unhappy?”

“Basically, yes,” I agreed. “Women need drama. But if you want to make her happy, you need to be in control of that drama. Otherwise, her frustration is just going to keep feeding on itself until it explodes.

“But you can stop that from happening by exploiting the emotional flaw in her psychology. All women share it. And that’s what makes this method universally effective. Believe it.” 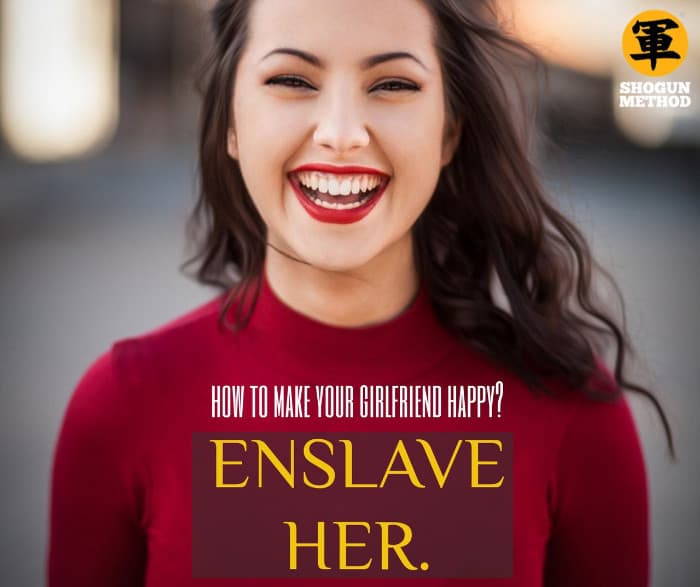 How To Build Deep Emotional Rapport With A Woman: Create Conflict!

“Answer another question for me,” I said. “What’s your most memorable date? The one that you two will always remember.”

“We were on our way to a restaurant in the next town over,” Liam began after a moment. “The car broke down in the snow. We had to walk back to a rest stop we’d passed, and we waited for a tow truck there in the cold for two hours. And we missed our dinner reservation.” He laughed. “I thought for sure she would never speak to me again.”

“But here you are, laughing about it,” I observed.

He seemed shocked by that, but nodded.

“Feeling sadness,” I explained, “gives people room to feel happiness. That’s especially true of women. They can only feel one emotion once they’ve felt the other.”

“What happened on that date,” I went on, “is that you both faced a problem. Solving that problem gave you something to bond over.”

“So what you’re saying is that I need to create conflict and drama,” Liam said, starting to get it.

“Exactly. You have to give her that emotional rollercoaster ride she craves. And you’ll benefit because you’ll be the one in control. There is, quite frankly, no other way to make a woman truly happy.”

I quickly added, “Or to make sure that you’re happy, for that matter.”

How To Give Your Girlfriend The Emotional Rollercoaster

“You can think of it as hypnosis, if you want,” I suggested. “No matter what you call it, the fact is that it exploits women’s need for emotional turmoil.”

“All right.” His interest was piqued. “How does it work?”

“Remember how I compared it to a rollercoaster earlier?” I asked. “What you have to do is purposefully create negative situations to resolve together.”

“And that will give her the drama and resolution she craves. That’s what she gets from romantic comedies,” Liam pondered.

“Yes. But, most importantly, you are the source of those good and bad emotions. You’re the person in control of her entire emotional state.”

“Kind of like a junky who needs a fix,” he observed.

“Yes. Liam, do you understand how drugs affect the brain?”

“Exactly. You’ll be in control of those same processes in Karla’s brain. She will, quite literally, become addicted to the emotional high you give her.”

Liam sat back in his chair and whistled thoughtfully.

“Not only will she be happy,” I concluded, “But you’ll have reclaimed your dominant position in your relationship. And she’ll never even realize it.”

READ ALSO: Want A Submissive Girlfriend? Do This.

Fractionation: The Key To Her Happiness (And Your Relationship’s Survival)

And, if you meet him, he’ll tell you the same thing.

He and Karla are still together, and happier than ever. No more fighting. No more bad attitudes.

In fact, Liam learned so much about female psychology that he’s become a rather successful screenwriter.

Liam found success with love and his career by mastering the inner workings of the female mind.

And you can do the same.

All you need to do is use Fractionation.

A word of warning: Fractionation is not a toy. It can cause permanent psychological damage if used for the wrong purposes.

You should absolutely never, ever use Fractionation to harm a woman.

If you agree with that principle, then the keys to your relationship’s salvation are yours for the taking.

So, what do you think?

Are you ready to start making your wife or girlfriend truly, deeply happy?

Are you ready to take back control of your relationship?

Are you ready to learn all about Fractionation?

PS: Got any questions or comments? Leave them below.