How To Make A Strong, Independent Woman Fall In Love With You

Two weeks ago, a friend of mine started dating this woman.

Everybody says she has a “strong personality”. This usually means she talks too much.

Anyway, here is how my buddy described his new girlfriend to me:

“She earns more than I do, is head of a department, and has been living on her own since she was 18.”

“She said she broke up with her last boyfriend because he ‘leaned’ on her and he let her take care of everything.

I need to know how to handle her, Derek. Please help me and tell me how to understand her. I need to become more assertive and dominant… or she’s going to eat me alive.”

In a minute I’ll reveal to you the advice I gave him. But, before I go on, let’s dig deeper on why women behave like this.

“Independent Woman” Relationship Problems – Where Do They Come From?

Lots of guys today have the same problem.

In fact, just look all around you.

I won’t spend any time explaining the political and socioeconomic reasons behind this. That’s pretty much water under the bridge, and won’t help anyone…

Instead, I’ll spend more time on the solution and tell you how to handle a strong, independent woman.

But first, you need to understand the intricacies of female psychology.

Here’s the important thing that you must understand:

The concept of a “strong, independent woman” is a facade.

It’s an act she’s putting on. In other words, it’s not indicative of her true nature.

What I am going to tell you is going to surprise you because I don’t often agree with mainstream relationship coaches… but in this case, we are 100% on the same page…

Just like a player who avoids deep relationships with women and remains a bachelor for years. He’s doing this to avoid getting his heart broken.

The “strong, independent woman” is doing the same thing.

Deep down women fear being vulnerable… and so they put on an air of strength and independence.

READ ALSO: Are You Dating A High Maintenance Woman?

What A Woman Really Thinks (And Wants)

…and yet it’s part and parcel of the game.

Understand that beneath this tough exterior, she wants you to be a man and dominate her. 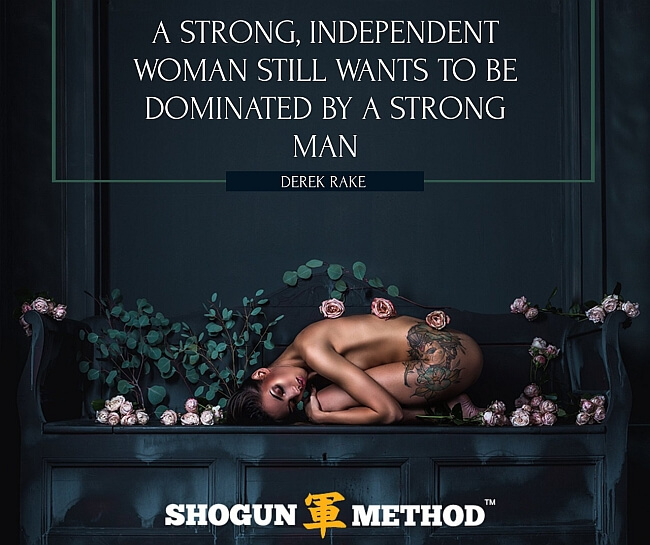 This is true no matter how “independent” she may seem to be. Remember… she can’t fight mother nature. She’s programmed in her DNA to want to be dependent on a man.

No matter what she says… this is what she wants.

No matter what the mainstream media say… this is what she wants.

Let’s not kid ourselves. 40 years of sexual liberation and political correctness ain’t gonna overturn millions of years of evolution.

And here’s the cold hard truth…

…if you’re not a real man, she’ll dump your ass in no time for a man who can handle things.

So you need to step up.

Do you want to know how to do it?

How To Deal With Her “Independent Woman Syndrome”

… that the female mind is flawed.

And the key to controlling and dominating her – no matter how assertive she is – is to exploit these flaws.

If the idea of “exploiting a woman’s flaws” sounds aggressive and manipulative to you… you know what? I don’t care.

This is warfare and you either hunt or you are the hunted. Guys who refuse to take this approach get their hearts broken and cry.

What I’m going to share with you are the two flaws of the female mind that you should (and must) exploit to be good with women.

Female Psychology Flaw #1: She Doesn’t Know What She (Really) Wants

That question is as old as the hills. And most men have tried to answer it by doing the seemingly obvious thing to do… by asking women directly.

When it comes to love and relationships, a woman can never properly articulate what she truly wants.

So she will give you some bullshit answer that has nothing to do with her real desires.

There’s a good reason for this. She can’t articulate those desires because they are hidden deep inside her subconscious brain.

And so she’s not to blame for this at all.

This leads on to the second flaw in her psyche…

Female Psychology Flaw #2: She Has No Control Over Who She’s Attracted To

…and then you see her hooking up with a jock who has never told a joke in his life?

Or have you heard a woman say that she goes for “tall, dark, handsome men”…

… and then you see her kissing a short, blonde, ugly guy?

What the hell is going on here?

So, now you know.

The “stronger” and more “independent” the woman is, the more she will deny that she is not in control of her attraction switches.

Not only that, she will fight tooth and nail to reject your overt attempts to subdue her.

How To Control & Dominate Her – The Shogun Method Way

So, how do you put a seemingly independent woman under your control then?

Here’s the answer: you don’t.

At least, you don’t try to control her overtly. Trying to dominate her using force or coercion is what weak men do.

It won’t work. She’ll push back.

You must control her covertly.

Who a woman is attracted to is determined by her subconscious mind.

This means that if you want to attract (and subsequently, control and dominate) a woman, you’ll need to manipulate her subconscious mind.

There exists a simple Mind Control / NLP technique which taps into a woman’s subconscious mind directly.

This technique is simple but it’s not easy. And just because it’s simple, don’t assume that it isn’t powerful.

In fact, it’s hands-down the most effective technique I’ve ever discovered for manipulating a woman’s emotions.

If you’re familiar with Mind Control, you’d have surely heard of this technique before…

This technique is called Fractionation.

It’s something that has been kept under wraps for a long time, and for good reason…

Like any other tool or technique, it can be used for good, or for bad.

And when it’s used for bad, disasters happen.

Indeed, bad guys have been using Fractionation on women to do just one thing: mess them up emotionally.

And that, my friend, is fucked up and I don’t want anything to do with it.

…promise me that you’ll only do good things with Fractionation, not bad.

Great. So, here’s what you need to know about Fractionation…

It was an accidental discovery by an unknown hypnotist at his hypnotherapy practice in England.

He found that if he bought his subject out of trance repeatedly, she would get into trance easier each consecutive time.

What does this mean for you and your attempts to control a strong woman?

If you can zig-zag her between emotions, by making her feel pain one minute and pleasure the next…

…then you’ll be able to manipulate her subconscious mind and get her emotionally addicted to you.

And when her subconscious mind is under your control…

And when you can get her hooked on you emotionally…

….you’ll never have to argue, plead, or negotiate with your woman ever again.

…you’ve got her in the palm of your hand.

Now let me ask you this important question –

I thought you might. So I’ve spent some time recording an Online Masterclass on Fractionation and Mind Control.

Because it’s 100% online, you can attend the Masterclass no matter how busy you get, or where you are (as long as you’ve got Internet connection).

All you need to do is click on the link below. Then enter your best email address so I can send you the details of the Masterclass.

That’s it. I’ll see you at the Online Masterclass, alright?

Wishing you health, wealth, and love,

P.S. Want to know what advice I gave to my friend with the ball-busting girlfriend I told you earlier?

I told him exactly what I’ve told you in this article. And I gave him a quick intro into Fractionation.

The result? His girlfriend might be the boss at work but he’s the leader of the household now. He’s the one in charge and she loves him for it.

P.P.S. If you’re on the fence about taking the Masterclass, I want to share a favorite quote:

“A year from now you may wish you had started today.”

If you’ve been thinking for a while that you need to be more assertive and balance your relationship with a strong woman, well…

Make this change for yourself right now.

What are you waiting for?

P.P.P.S. Questions? Comments? Leave me a message below.