Let me ask you this: have you ever gotten friend-zoned by a woman?

Not kidding around: Getting friend-zoned HURTS.

It’s discouraging because it makes you feel less of a man.

It’s frustrating because you spent all that time, money, and energy to “win” her… only to lose in the end.

And you know what?

The reason why so most guys get friend-zoned is that they make ONE DUMB MISTAKE.

If you’ve ever been friend-zoned yourself, then you’ve probably made this Dumb Mistake, too.

And if you simply STOPPED making this Dumb Mistake, you’ll find it MUCH EASIER to get women to like you. Not just as a friend… but something MORE.

A secret lover. A fuck buddy. A friend-with-benefits. A potential boyfriend. Anything but “just friends!”

This guide will show you how to be more than friends with her. You’ll learn how to avoid the friend zone. You’ll find out what that Dumb Mistake is, how to stop making it, and what to do INSTEAD.

The Big Dumb Mistake That (Almost) Every Guy Makes

First of all, let me get a glaring misconception out of the way…

You don’t “fall” into the friend zone.

Instead, you START OUT in a woman’s friend-zone.

Makes sense, right? When she first meets you, categorizing you as a “friend” is the first thing she does.

And as you get to know her better, you make the Dumb Mistake…

…and you end up STAYING “just her friend.” Often, for LIFE.

We’ll get to what the Dumb Mistake is in a little while. For now, you must know this…

…then you should do everything you can to GET OUT of the friend zone!

Stages of Love: The IRAE Model

If you are familiar with the Shogun Method, you’ll know that there are “four” stages of love –

This is the (in)famous IRAE Model. (Intrigue-Rapport-Attract-Enslave) 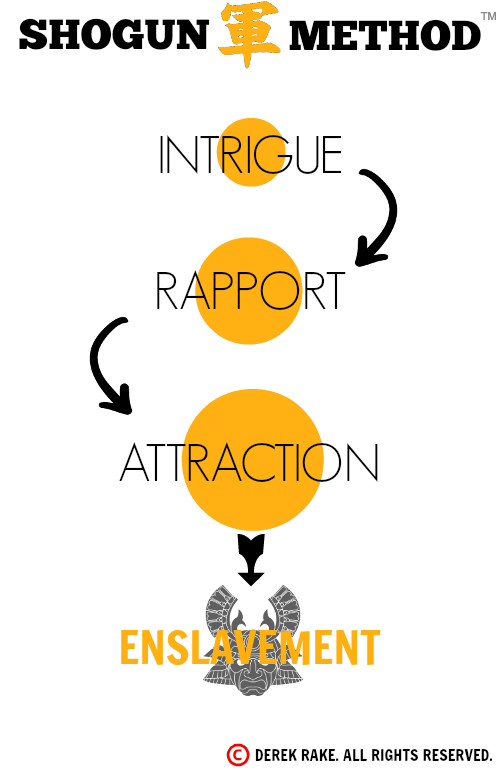 To be successful with a woman, you’ve got to go through one stage at a time, starting at Intrigue. Then, you move on to Rapport, and then to Attract, and finally to Enslave.

And you must do this in order, and without skipping ahead.

And when it comes to getting out of the friend-zone, we’ll need to focus on the second stage: Rapport.

In Shogun Method terms, “Rapport” means only one thing: the powerful emotional connection she feels for you.

Rapport makes her relate to you.

Rapport makes her feel physically and mentally comfortable with you.

Most guys know the importance of Rapport. And most guys know how to build rapport with a woman they like… more or less.

So why do most guys still end up trapped in the friend zone?

It’s because the DUMB MISTAKE most guys make:

They think all kinds of rapport are the same.

They think that just because they got the girl smiling, laughing, and talking excitedly, they’re on the right track.

Why? Well, it’s all because they’ve been building the WRONG kind of rapport in the first place!

In Shogun Method terms, we call this “Contextual Rapport”.

Contextual Rapport will make a woman see you as her emotional tampon… who just happens to be a guy.

Contextual Rapport will make her see you as a “friend”, never as a boyfriend or lover.

Master Carlos is old, wise, and well-respected. You’ve trained under him for months.

You idolize him and look up to him as a role model. He’s your hero. A father figure.

Then suddenly, one night, he walks into the bar you’re in. He calls himself Charlie, sits at your table, grabs a beer, and starts talking to you like one of the fellas.

How would you feel?

Stunned? Uncomfortable? Disappointed? And a little turned off?

The “rapport” you built with Mr. Carlos is confined to the “context” of Jiu-Jitsu training. It doesn’t exist outside the Jiu-Jitsu dojo.

And that’s why you’d feel uncomfortable with him buddying up with you at the bar. You’ve built Contextual Rapport with him, but only as a Student to a Master.

And this is exactly why guys fall into the friend zone:

They wrongly build the kind of Rapport which is confined to the “context” of being friends.

And that jarring feeling that you feel when Master Carlos hits you up at the bar? It’s exactly what women feel when they see you as a friend… and then you suddenly try to be more than friends with her.

You’ve been friend-zoned because the rapport you built with a woman is the kind she has with her female buddies. It’s not the same rapport she feels with a guy she sleeps with.

And when you give her that jarring, uncomfortable feeling… it’s enough to make her KEEP you in the friend zone. And then it’s pretty much game over from there.

READ ALSO: How To Make A Woman Want You (As A Boyfriend)

How To Be More Than Friends With A Woman

Getting stuck in the friend-zone usually means just one thing:

You spent too much time building the wrong kind of Rapport.

That’s the big fat Dumb Mistake that most guys make.

And guess what? As a result, she ended up liking you too much as a friend. And deep inside, she doesn’t want to lose the value she gets by having you as a friend.

And so she TRAPS you in her friend zone.

Obviously, to avoid the friend zone, you’ll need to make the right kind of Rapport.

I’ll show you how to do that next, so keep reading!

You can’t build meaningful rapport with a woman with ordinary, everyday conversation… even if you’re good at it.

We are now moving into the area of using Mind Control on women. This can get a little technical and jargon-ish – but do bear with me, alright? It will be very worthwhile to you, I promise.

Here’s the Mind Control technique that will sidestep the “friend zone problem” altogether:

VAKSOG is an acronym which stands for:

Simply, these are the ways women process external information. They are known as “VAKSOG Modes”.

It turns out that for a woman, there’s usually one (or two) dominant VAKSOG Mode.

The key is to (1) find out her Dominant VAKSOG Mode is, and then (2) match it when you talk to her.

(We’ll get into some examples in a minute.)

So, how do you know what’s her Dominant VAKSOG Mode? Simple! Just listen to the words she chooses when she talks to you.

You get the idea.

Next, match her VAKSOG Mode by talking to her with the same keywords.

Let’s look at an example to see how this works, alright?

Let’s say you ask her:

“What is it about The Talented Mr Ripley that you love so much?”

“Wow, I absolutely adore that film! The view of Rome in that movie is simply incredible… it’s absolutely beautiful! I love how the colors just come to life… they look so vibrant, so alive. Oh, and Jude Law is absolutely an eye candy in this movie!”

What do you think her Dominant VAKSOG Mode is?

If you guessed “Visual“, you’re correct. Take note of the words she used in her answer:

Next, craft your answer which matches her Dominant VAKSOG Mode like this –

“I remember when the movie came out so many years ago… not bad. I went to the cinema to see it with a group of friends, and before that we spent the afternoon at the park… the day was bright, sunny… and the sky was clear and blue. The movie was great… and I got to look at Gwyneth Paltrow for two hours… she was really pretty in that movie. It was a good day!”

See how that works? Simple, right?

When you use the same VAKSOG mode she uses to communicate…

…she forms a much strong, deeper emotional rapport with you.

I’ve got to warn you though:

This is not the end of the process.

Remember the IRAE Model? To seal the deal, you’ve got to escalate from Rapport stage to Attraction stage as quickly as you can.

Staying too long in the Rapport stage will pretty much make you fall into the friend zone again and again. Be careful!

How To Turn A Friend Into A Lover: Use Fractionation

Here’s a technique you can use to escalate quickly and seal the deal with her:

It’s a Mind Control technique which can be used to make any woman emotionally addicted to you.

How does Fractionation work? 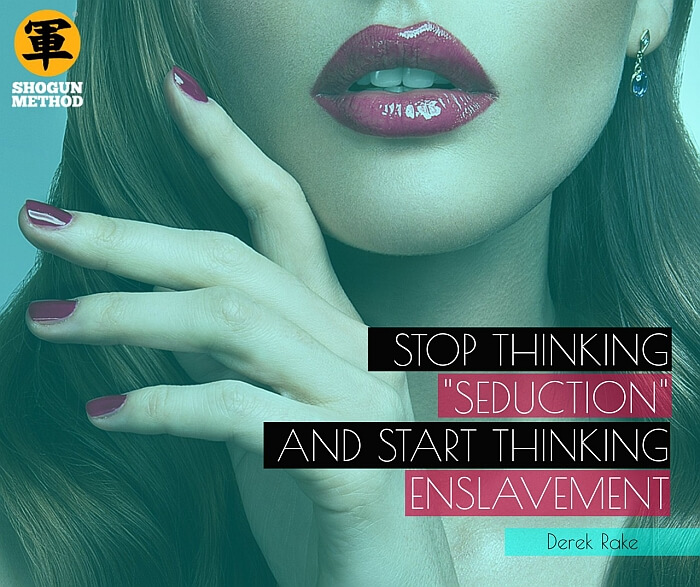 Think of something you’re ADDICTED to – like a TV show, or a video game, or a brand of beer.

Now, you probably WON’T be watching that TV show all the time, right?

You won’t be playing that video game 24/7, either.

And you definitely won’t be drinking the beer the whole day.

But still, you find yourself addicted to them. After a while, you’ll need your “fix.” And you stay hooked for years… or decades.

Guess what – that’s how powerful Fractionation is.

TV show producers, video game makers, and beer brewing companies know how it works. And they use it to perfection.

And that’s what you need to KEEP yourself out of the friend zone FOREVER.

I can’t spell out everything you’ll need to know about Fractionation in a single article. This guide is already as long as it usually gets.

So, let me teach you how to use Fractionation on a woman this way:

By personally inviting you to join my Online Masterclass today.

Finally, remember this one important thing:

Unless you mirror her VAKSOG Modes to build powerful, emotional (and sexualized) rapport…

…then you’re doomed to stay in the friend zone forever.

Don’t trap yourself like that. Give yourself a chance to be her lover.

And Fractionation is the best chance you’ll ever get.

Talk to you more at the Masterclass,

PS: Questions or comments? Leave me a message below.