The Art Of Being A Player – Rules, Tips & Techniques

I have this new client (let’s call him Greg) who’s been studying seduction and pickup stuff for years.

Greg is a nice guy and well-intentioned. He knows every technique by rote. He’s been to every boot camp by every Dating Guru. He goes out four nights a week to meet women.

And yet up until a week ago, he was still a virgin.

He was on the verge of giving up and accepting loneliness for the rest of his life. But he decided to try one more thing.

He flew to San Diego to meet me one-on-one.

He wanted to find out what he was doing wrong.

“I’m tired of failing with women. Teach me how to be a player,” he said.

I found what he was doing wrong, and when I did, it was such a paradigm shift that I just had to write this guide.

What did I tell Greg?

The #1 Reason Why Guys Fail With Women

Here’s something you may have suspected for years but never confirmed:

It’s not your fault you haven’t had the women you deserve.

There’s a conspiracy to keep you from doing well with women. It’s true.

The goal of all women is to extract as many resources from men as possible. They want you to work hard, keep your head down, pay the bills and buy them a Louis Vuitton bag once in a while.

Think about it: if a man realized he had options, why would he work his fingers to the bone to support one woman? Right?

Your fellow men aren’t much better.

Men are naturally competitive and view the dating market as a zero-sum game. Keeping you down and believing that you can’t get quality women kills off the competition.

So, asking “dating advice” from your guy buddies can be counter-productive.

Now, pay attention. Here’s a little Business 101: repeat customers are profitable. These gurus won’t tell you what really works because of one reason:

They want you to keep coming back to attend their expensive seminars.

(Side note: we don’t do seminars, ever. It’s the scummiest of all scams you can ever find.)

As such, PUAs/Dating Gurus say what sounds good, and what gets media hits.

If they ever did tell the truth, they would lose their lucrative publishing deals.

If they ever did make their students successful, nobody would come back for their seminars.

Fortunately, I don’t have to kowtow to the mainstream media, nor do I throw expensive seminars….

So, I’m free to give you the unvarnished truth.

To be a REAL player, you have to manipulate and dominate women.

Quite different from everything you’ve ever heard about doing well with women, right?

Of course, some may find my tactics to be (ahem) deplorable and offensive. And that’s fine, I expect that.

Still, promise me to have an open mind and read the entire article so that you can come to your own conclusion at the end.

Cool. Let’s get into it then, shall we?

READ ALSO: Signs She Is Crazy (Are You Dating A Psychopath?)

How To Be A Player (Five Unconventional Rules To Obey)

If you want to know how to be a player, here are the five (rather unconventional) rules to obey…

With these rules, you’ll be a TRUE player.

You’re not the “player” wearing cheesy Raybans and a leather jacket while trying to bring home drunk skanks from the club.

You’ll be a man who is never alone. A man who knows exactly how the female mind works. A man who has achieved mastery of female psychology. 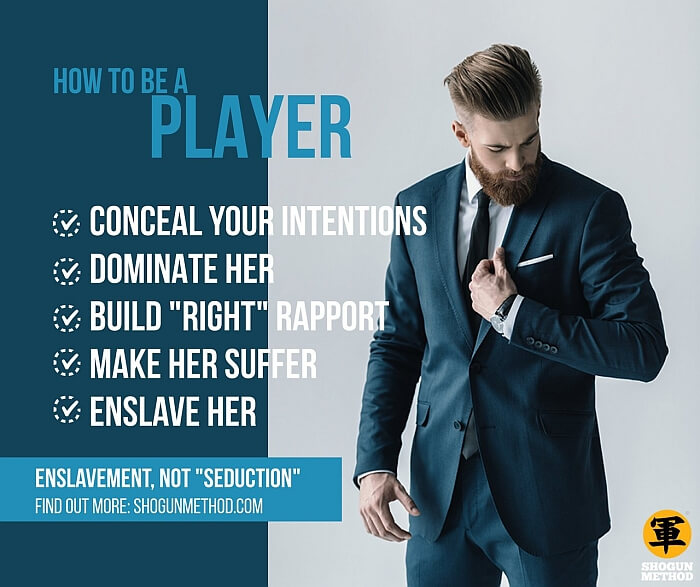 The popular chorus you’ll hear is:

“Always be honest with a woman.”

“Honesty is the foundation of a successful relationship.”

“Wearing your heart on your sleeve is how you can make a relationship last.”

Women are addicted to mystery and intrigue. They love to live in their imaginations. Being “honest” runs counter to this.

Here’s an example to illustrate:

On your very first date with a woman, tell her this within the first ten minutes:

“I’m looking for a long-term relationship.”

Then, tell her about all your exes and how many sexual partners you’ve had. And while you’re at it, describe to her your favorite sex position, and your preferred brand of condom.

And after that first date, blow up her phone saying: “I think I’m in love already. Please be my girlfriend. Move in with me tomorrow.”

Do you think you’ll land a second date?

Of course not. You’d be lucky if you don’t get a restraining order from her.

So, here’s the point I’m making:

So if you want a woman to do what you want, keep her guessing.

Rule #2: Domination Is The Name Of The Game

Here’s another often repeated piece of advice we can destroy here:

“Every relationship must be equal.”

Of course, that all sounds very fair and politically correct. But here’s the thing…

Biology says that, as a man, you must lead. That means you never put the burden of responsibility on your woman.

How? Here’s a start: don’t ask for her opinion. On anything.

Don’t ask her to decide. On anything.

Shoulder the burden of responsibility and your woman will love you unconditionally. Here’s what you must understand about women: she wants you do control and dominate her. It’s hard-wired into her genes.

Here’s the next rule…

Not all rapport is created equal.

So, you’ve built rapport with the woman you want to attract. Is it the right kind of rapport, though?

Yes, there’s the right kind, and the wrong kind of rapport.

Ever made this mistake?

You find out that you and a woman share a common interest. Then you talk that topic to death and think you have a “connection.”

Think again. If your relationship with a woman is locked into one particular subject, you’re friends, not lovers.

What about this example: when you were in school, did you ever bump into your teacher around town?

I bet you didn’t know how to relate to your teacher outside of school, right?

This is an example of your relationship being based on a specific place.

In our flagship course, Shogun Method, we call this “Contextual Rapport.” This is rapport based on one topic or one place. And this is the wrong kind of rapport that will only fuck things up for you.

If you only have Contextual Rapport with a woman, you’re not getting intimate with her. Worse, you may even get friend-zoned.

Here are a couple of quick techniques to help you escape Contextual Rapport:

READ ALSO: Unrequited Love – What You Can Do About It

Rule #4: Give Her Negative Experiences

Time again to kill another sacred cow of the mainstream relationship advice world:

Trying to make her happy is counterproductive. Here’s why:

Trying to make a woman happy will bore her to death.

Make her feel uncertainty, fear, even sadness. But never let her feel bored. That’s the cardinal sin as far as love and relationships are concerned.

Life with you must be unpredictable. It’s not as difficult as it sounds. It just takes some forward planning to engineer some shared negative experiences.

Attraction works in the beginning of a relationship, but it doesn’t last.

Pickup Artists get numbers (and sometimes lays) but they suck at keeping women.

True players enslave. A true player can keep any woman around as long as he wants to.

Here’s what I mean by ‘Enslavement’: controlling her mind and manipulating her emotions.

Don’t confuse emotional and physical enslavement. Nothing we teach is about coercion or using physical force.

It’s all about putting her emotions (and her thoughts) under your control.

And you know what? Politicians, large corporations, famous brands, video games, Hollywood do this every day. They’re masters at it. And that’s why they are successful (and powerful).

Is Enslavement immoral? What do you think?

The difference here is that you care about the person you’re manipulating. (After all, you’re in love with her, right?)

Realize that manipulation is just a tool. It’s like sun or water – you can use them to burn, drown, wash, or warm people.

What’s important are the intentions of the person using them.

So, you may be wondering now: what’s the best way to enslave a woman?

Fractionation is a polarizing mix of hypnosis and deep human psychology. It was an underground technique used by rogue hypnotists for years.

And guess what? The Shogun Method team were the first to adapt Fractionation to use in dating and relationships.

We are the pioneers, and so we are so ahead of the curve that nobody else comes close. It’s true.

READ ALSO: How To Seduce Women

How To Be A Player: Put Fractionation In Your Arsenal

There’s no doubt that Fractionation is powerful, but like anything in life:

Here’s why you have to be responsible when using Fractionation on a woman:

There is no undo button.

That’s right. No off switch. No backspace. Once she’s enslaved, that’s it. She will be beyond the point of no return.

Now if you’re sure you want effortless mastery with women for the rest of your life I’ve got an offer for you:

I’ll teach you Fractionation as long as you promise to obey these two conditions:

On that page, enter your name and email so I can send you a private invitation to the Online Mind Control Masterclass.

Do that now, and I’ll see you at the Masterclass.

After spending the weekend with me in San Diego, he emailed me:

“The other night I went out with some friends for my 28th birthday. I got chatting with this bombshell and I started to fractionate her. She was all over me and practically forced me to take her number. Now she’s blowing up my phone every day asking when she can come over to spend the night with me. That’s NEVER happened to me before. Thanks, Derek.”

No worries Greg. It’s all in a day’s work.

If you want the same tremendous results with women, start by enrolling in the Online Mind Control Masterclass. Click here.

P.P.S: Questions or comments? Leave them below, and I’ll respond to them.