How do you NOT get friend-zoned?

Over the years teaching Shogun Method to tens of thousands of guys around the world, I’ve realized this –

One of the most common problems guys ask me for help with is this:

They want to know how to NOT get friend-zoned by the women they like.

It’s either (A) they secretly like a certain woman, but they don’t want to get friend-zoned by revealing their feelings to her…

…or (B) they’ve ALREADY been friend-zoned by a woman, and they want to get out of it.

So if you’re reading this article right now, answer this question for me right now:

Which situation resembles the one you’re in right now? (A) or (B)?

Whether you’d like to know how to avoid the friend zone or get out of it, this article will tell you what to do…

Because guess what? The solution to both situations is the same.

Why Do Guys Fall Into The Friend Zone?

First, let me fix a misconception that most guys have about the friend zone…

You don’t “fall” into the friend zone.

Instead, every guy STARTS OUT in a woman’s friend zone.

Makes sense, right? When a woman meets you for the first time, she doesn’t fall in love with you right away.

She’s going to want to know a bit more about you first. THEN she decides whether or not to be more-than-friends with you.

So let me say that again:

You always START OUT in a woman’s friend zone. And that’s entirely okay.

You know what’s NOT okay?

It’s STAYING in the friend zone.

Unfortunately, that’s EXACTLY what most guys end up doing. They want to know how to be more than friends with a woman. And yet, most guys end up staying in a woman’s friend zone… sometimes for good.

Most guys make the mistake of thinking that all kinds of rapport are the same.

Well, guess what? They’re not.

And get this (very important) –

Contextual Rapport is basically rapport confined within a certain context.

And that’s where most guys shoot themselves in the foot.

Instead of Sexual Rapport (good), they end up building Contextual Rapport with the woman they like (bad).

When you’re with a woman you like, and you spend too much time building the wrong kind of rapport…

…she ends up liking you as a friend.

Then, when you try to be romantic and sexual with her, you end up creeping the crap out of her.

“Was he just pretending to be friendly? Did he really just want to fuck me from the beginning? What a creep!”

So that’s lesson number one:

Here’s what we call the theory of the “stages of love“. Every interaction you have with every woman in your life goes through four distinct stages.

This is otherwise known as the IRAE Model. (IRAE stands for Intrigue, Rapport, Attraction and Enslavement.)

It’s the core principle that powers up the Shogun Method, the world’s one and only dating advice system based on Mind Control.

You’ll find out more about Shogun Method later (or, if you must, read this review), but for now, understand this…

If you want to do well with women, you must do the following:

You MUST focus on clearing one IRAE stage at a time, in strict order, without skipping any stage.

(You’re already past the Intrigue stage. She’s interested enough to interact with you.)

Your priority, therefore, is to:

So let’s take a look at both steps in detail, starting with the first step…

READ ALSO: Unrequited Love – How To Deal With One-Sided Relationships

Step #1: How To Build The Right Kind Of Rapport

Spend too long in the Rapport stage, and you’ll risk building Contextual Rapport… and you’ll get trapped in the friend zone as a result.

So, you’ll need to move fast and build the RIGHT kind of rapport.

What’s the right kind of rapport?

The kind of rapport she shares with the man she’ll spend the rest of her life with.

Tall order? Not if you know how it’s done!

How do you do it?

With another Shogun Method technique, of course. I call this one:

VAKSOG is an acronym I coined. It stands for:

These are the ways women process information.

As such, “Matching Her VAKSOG Modes” simply means mirroring the same way(s) she processes information.

And here’s how it works…

Most women have two (or at most three) dominant VAKSOG modes. Some women only have one.

The key is to find out what your woman’s VAKSOG modes are.

We’ll get to some examples in a short while. For now, consider this:

Why is it so important to know how your woman processes information?

The author knows their (predominantly female) readers have different VAKSOG modes. And so he writes the scenes in a way that mirrors all the reader’s possible VAKSOG modes – and the readers love it.

You can do the exact same thing with a woman!

As such, you can make her emotionally attached to you…

…just by matching her VAKSOG modes while building rapport with her.

Here’s the first step you need to take:

Simply start by having a friendly, harmless conversation with her. Then, pay close attention to the words she uses while telling a story.

For example, if she talks this way:

So, you mirror her by saying:

“…I see you love traveling and seeing new things. I’ll admit – there’s something about sightseeing that allures me, too. It’s not enough to look at photos – you got to see it for yourself…”

That’s how you mirror her VAKSOG modes. Easy, right?

If you find out she mainly uses auditory processing, you can tell her:

“…oh, I hear ya. It’s so sad that rock music is out of fashion these days. But to hear you say you’ll always be a rockhead… that’s music to my ears.”

If you find out she’s a kinaesthetic person, you can say:

“…you do wall climbing? An idea just struck me. I do rock climbing four times a year. I’m hitting Yosemite this year – we should totally go together. I can take you by the hand and show you how it’s done.”

Get the idea? Simple, right?

If you pinpoint her VAKSOG mode(s) and mirror them over and over, the results are amazing, and FAST:

Once you’ve sensed you’ve built enough rapport, it’s time to move on to the second step…

READ ALSO: How To Get From “Friend” To “Boyfriend”

Step #2: Escalate From Rapport (R) To The Attraction (A) Stage

No matter how fun or feel-good the Rapport stage might be, don’t stay there.

Staying in the Rapport Stage means staying in the friend zone. So, you’ll need to escalate to the Attraction Stage, fast.

As you might have guessed, this is yet another Shogun Method technique.

Going back and forth from being romantic and being non-romantic? That’s an emotional roller coaster she can’t resist. 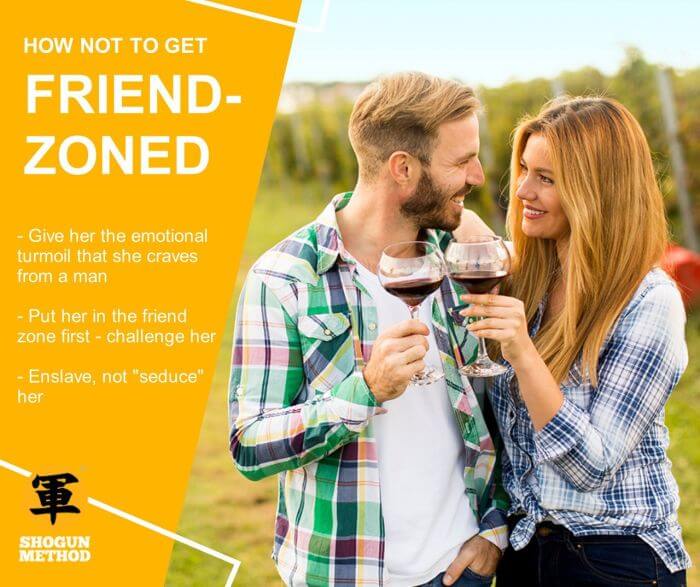 Once a woman shares enough rapport with you, this roller coaster will trigger a shift. A woman will discover her romantic interest in you, and slowly start revealing it.

Here are some signs she’s crossed into the Attraction stage:

And when that happens, pat yourself on the back. You’ve escaped her friend zone, and she’s absolutely THRILLED you did!

But here’s the catch for the whole process:

You MUST learn Fractionation.

Without Fractionation, you’ll stay stuck in the Rapport stage, and you’ll end up getting friend-zoned – probably for life.

And that would really suck, right?

So, here’s the deal: the sooner you master Fractionation, the better.

You can learn everything you need to know about Fractionation right now – by joining my Online Masterclass today.

In the Masterclass, you’ll learn:

So, you want to escape your woman’s friend zone?

Fractionation is the answer. And you can learn it right here, right now.

PS: Got questions? Comments? Leave me a message below.