“I can’t stop thinking about my ex girlfriend. What do I do?”

Patrick was a mess when he first came to see me.

He had just broken up with his wife, Shay. The divorce wasn’t final, but she was already seeing another guy.

That tore Patrick to pieces. He was depressed, smoking and drinking like a fiend. He looked pretty bad.

Desperate, he had come to me for help.

“Derek, I just can’t stop thinking about Shay,” Patrick told me. “I’ve tried to get over her for months – work, hobbies, the fellas – but nothing’s working.”

Have YOU ever felt the same way as Patrick?

Or worse – are you in Patrick’s situation RIGHT NOW?

Do you think about her all the time?

Do you want to know how to stop thinking about your ex-girlfriend or wife?

Check out this video :-

No matter if the breakup happened just yesterday or years ago… the pain will never really go away, unfortunately.

When it happened, you probably felt:

You probably still feel the same way now. And if you do, then I got some encouraging words for you…

It’s NOT your fault you feel that way.

Those feelings of inadequacy and depression? 100% natural.

It’s a completely humane, acceptable reaction to being rejected and replaced.

So, here’s my advice: don’t worry about it! In fact, your feelings right now reveal a good trait in you:

That you’re really a good person, and would change EVERYTHING if you got a second chance.

READ ALSO: How To Stop Obsessing Over Someone

You Deserve A Second Chance

What you’re going to learn in this guide will give you that second chance, just as it did for Patrick.

When I told Patrick I was going to teach him how to get Shay back, he hesitated.

He told me: “But she seems happy with the new guy…”

I told him: “Patrick, this isn’t about her happiness – it’s about YOURS.”

I told Patrick that there were only two outcomes that would make him happy:

So, here’s my question to you:

Do you want her back?

If your answer is “Yes” – as was Patrick’s – then that’s all that matters.

Let’s go get her back!

How To Get Your Ex-Girlfriend Or Ex-Wife Back

Question: How do you get an ex-girlfriend or wife back for good?

Answer: By enslaving her emotionally. 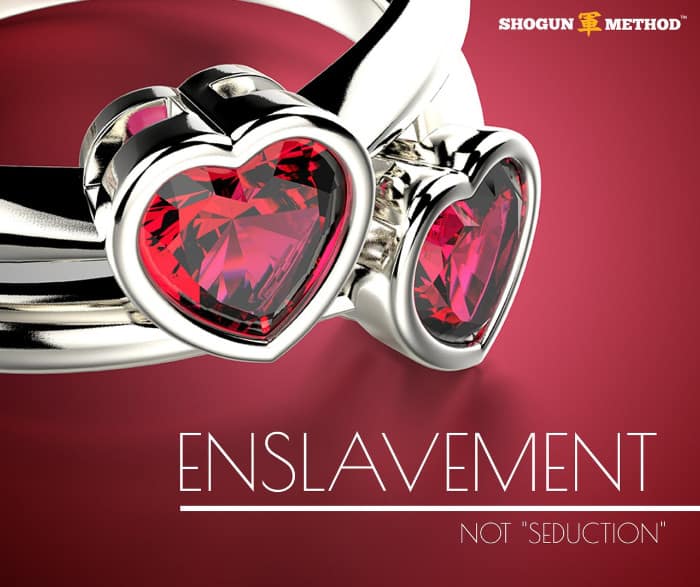 Now, if the word “enslave” shocks you, understand this –

I don’t mean the PHYSICAL kind of enslavement. That would be wrong (not to mention illegal).

What I mean is to enslave your ex-girlfriend or wife EMOTIONALLY. Big difference.

So, what’s Emotional Enslavement then?

It’s what you experience when:

THAT’S the kind of enslavement I’m talking about.

To win your ex back, you’ll need to make her addicted to YOU again. You must make her enslaved to you emotionally.

And you’ll learn how to do it shortly. First, however, let’s answer one very fundamental question…

Why She Left You In The First Place

Now pay attention because this is important!

The reason your ex left you is NOT:

Those are just symptoms of the REAL problem.

You didn’t enslave her. Plain and simple.

In Shogun Method, I teach that every relationship goes through four stages:

This is otherwise known as the IRAE Model. (IRAE = Intrigue-Rapport-Attract-Enslave)

Leading a successful relationship requires that you do all these three things:

Why She Left You (The IRAE Model Explains Everything)

Now, if you had a wife or girlfriend, but you lost her… then the IRAE Model will tell you why –

You successfully made it to the Attraction stage… but you didn’t reach the Enslavement stage.

So eventually, she lost her attraction for you, left you, and is now with another guy.

If you want to get her back, you can’t do it at the “Attraction” stage. She’s already at that stage with another guy in her life, so there’s no “space” in her life for you there.

But guess what? There IS space in her life for you at the “Rapport” stage.

To Get Her Back, Friend-zone Yourself (For Now)

That’s the first step to getting her back. You need to start a new relationship with her, this time as a friend. Work in the “Rapport” stage.

If you’re communicating with her…

…then you’re in a good spot.

You’ve made it back to the Rapport stage with her. So, congratulations.

Now it’s time to get to the next important milestone…

How To Destroy Your Ex’s Boyfriend

You’ve made it back to “Rapport” stage with your ex. So far, so good!

If you have done things correctly, your ex will like having you around again. She’ll like the novelty of being friends with an ex – it’s something she can brag about to her girlfriends.

Remember: you want to appear as harmless as possible during this stage. Why? Because you want her to dump her new boyfriend, and to do that, you’ve got to be covert about it.

Wait For Your Opportunity

Continue to be a conversation buddy to her over the next few days and weeks. Sooner or later, she’ll talk to you about the new guy in her life.

Watch out for the moments when she complains about her new guy’s flaws. That’s what you’re waiting for.

Whenever she rants to you about her new guy, give comments that bring down his reputation in a funny way.

Here are some examples:

Do it in a low-key manner. Do it for as long as it encourages her to rant about the new guy. But don’t press the issue, or you’ll give yourself away and ruin everything.

READ ALSO: Emotionally Unavailable Woman (How To Deal With One)

Push Her Off The Edge

The key is to make her keep complaining to you about her new guy.

You’ll notice that the things she complains about will get worse and worse. That’s the sign you’re doing things right.

When she complains to you about something REALLY bad…

…or when she starts questioning being in a relationship with him…

…that’s when you pull the trigger and say:

“What the heck are you waiting for? Dump him already!”

If you do it correctly, she really WILL break up with him.

But she will, if she thinks it’s what any sane, mature, thinking woman would do.

And when she does, congratulations. You’ve successfully gotten the fucking bastard out of the way!

It’s not the time to rest on your laurels yet! Go ahead and seal the deal – by making her emotionally addicted to you.

How To Make Her Emotionally Addicted To You

Most “Dating Guru” advice would tell you that once you’ve had make-up sex with your ex, then that’s it. You’ve “officially” won her back.

But guess what? That’s wrong. VERY wrong. And here’s why…

If you don’t enslave her, then you’ll just lose her again down the line. Only this time, she’ll be gone for good.

You MUST enslave her. No sense getting her back if you can’t keep her, right?

So, how do you enslave a girl emotionally?

Enslavement involves “emotionally segregating” her from the outside world. It’s about being dominant and in control completely.

It involves using Mind Control techniques to make her look to you – and ONLY you – to meet her emotional needs.

Enslavement is a huge topic. You understand that it’s impossible to lay out everything you need to know in a single article.

(Inside Shogun Method, it occupies an entire module.)

Enslavement techniques are meant to be used from time to time… to stoke the fire and keep her “hot” for you. The more you use them, the more she feels like you’re “the one” for her.

And then, ultimately, she’ll reach the point when she can’t imagine herself being with anyone else but you.

That’s Enslavement. And that’s the last step of the IRAE Model. When you have enslaved her successfully, she will be yours for as long as you want.

READ ALSO: “I Love Someone Who Doesn’t Love Me Back. What Do I Do?”

Get Your Ex Back Now: Follow These Three Steps

So to recap, getting your ex-girlfriend or wife back requires you to take three steps:

Patrick took the advice to heart, did all three steps like what I told him, and guess what?

He managed to win Shay back. The divorce was called off, they got back together, and they’ve never been happier.

And you know what? Many of my other Shogun Method clients got their exes back using this exact same process.

Heck, I’ll make things EVEN EASIER for you.

By giving you access to the core Mind Control technique behind all three steps of the process.

That technique is called Fractionation. It’s the cornerstone tactic which powers up every Enslavement technique inside Shogun Method.

…feel what you want them to feel…

…and do what you want them to do.

By mastering Fractionation, getting your ex back becomes easy as pie. And best of all, you can learn it by joining my Online Mind Control Masterclass today.

Learn how it’s done by clicking on this link below:

After you click the link, a new page will come up. Enter your best email address so that I can email the Invite to you (if you qualify).

If you can’t stop thinking about your ex, then there are only two ways to be happy again.

And if you want to get her back, Fractionation will increase your chances tremendously.

Act now because you don’t want the new guy to know this and enslave her instead. Click here.

PS: Questions or comments? Leave me a message below.