How To Stop Obsessing Over Her (Using Mind Control)

How do you stop obsessing over someone?

I met Jay, an events guy, at a recent business convention.

He told me that he used to play the “pickup” game with reasonable success. Recently, he said, he decided to get a serious girlfriend and settle down.

“Her name was Nicole, and she was an old friend from college,” Jay told me. “I’ve had the biggest crush on her for the longest time, but never had the guts to tell her.”

Jay showed me his phone. A photo of Nicole, a petite but sexy Asian-American woman, was his wallpaper.

“Thanks to my pickup skills, I’ve gotten more confident and charismatic than I was in college,” Jay continued, grinning.

“So… a few weeks ago, I took Nicole out on a few dates, gave her a great time, then popped the question.”

“She said ‘no,’” Jay chuckled somberly, still staring at Nicole on his phone.

“Now get this, Derek, I got rejected LOTS of times in my pickup days. I’m supposed to be used to it.”

“But…?” I prodded him to continue.

“But I can’t get over her!” he said. “I can’t move on. I’m obsessed. I can’t stop thinking about her. It’s eating me up inside. I LOVE her, Derek, what should I do? How to stop obsessing over someone like this?”

How To Stop Obsessing Over Someone Who Hurt You

Let me pause my story right there.

Think about a woman you loved who rejected, dumped or hurt you in the past…

…but no matter what you do, you just couldn’t stop thinking about her.

Even now, she’s still on your mind, isn’t she?

Or worse, you may even be obsessing over someone you barely know.

In either case, let me tell you what I told Jay back then:

“Don’t fight the obsession,” I advised him.

“If you could get over her, you would have done so by now. But since you haven’t, it means you’ll need to do something else.”

Jay laughed out loud. “But she’s already rejected me!”

I shrugged. “So? Don’t tell me you’re quitting after one measly rejection.”

Jay hesitated. “But… she already said ‘no’…”

“Doesn’t matter,” I said. “If you really loved her, you wouldn’t just give up on her, would you?”

I then told Jay that since Nicole rejected his first attempt, he needs to do it differently the next time.

I suggested he do it the Shogun Method way.

And you should, too.

READ ALSO: “Does She Still Love Me?” Here’s How To Find Out For Sure

This is how a “Pickup Artist” is trained to think…

Once a woman rejects you, that’s it.

You got to accept your failure and move on to the next girl.

And you know what? This makes complete sense in the pickup game.

…NOT to start long-term relationships with them.

But alas, that’s also the mistake Jay made.

He thought that once Nicole rejected him, he had to get over her and move on right away.

Only this wasn’t pickup anymore. He was playing for keeps. He didn’t know how to make a relationship last, and that handicapped him severely.

And that’s why he got into so much stress. He was using Pickup Artist tricks (short-term) to try and start an exclusive relationship (long-term).

If you really love her, don’t give up so easily!

Let’s jump right into the really good stuff, shall we?

Step #1: Learn The Real Reason Why She Rejected You

So why did she reject you?

You might think it’s any of the following reasons…

…so on and so forth.

All these possible reasons actually stem from the REAL reason why she rejected you.

If you had this REAL reason covered, she would NOT have rejected you…

…and instead, she would have been thrilled you asked, and would have gladly said “YES!”

She wasn’t enslaved to you.

Yup, you read that right.

And NO, I don’t mean the physical kind of enslavement. (That would be illegal, not to mention immoral.) 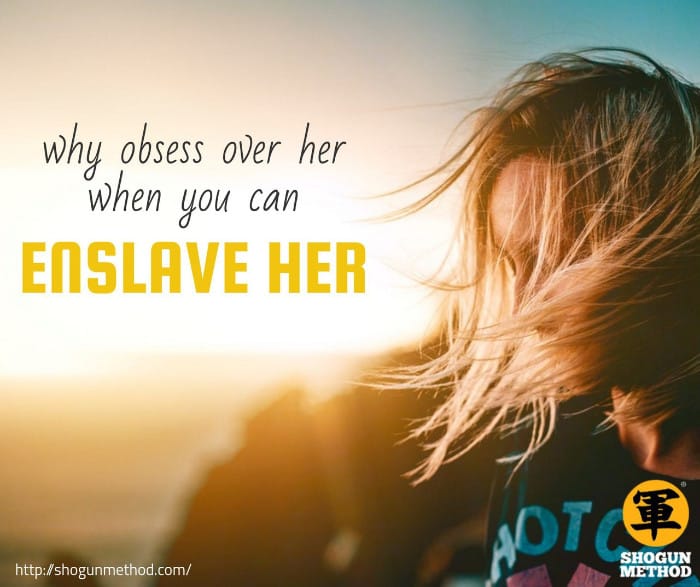 It’s about making her emotionally addicted to YOU – even more than she’s addicted to 50 Shades of Grey or Game of Thrones.

READ ALSO: How To Get Over Someone You Love

If you’ve never heard of emotional enslavement before, it’s like this…

Every relationship with a woman goes through four stages (also known as the “four stages of love“):

In Shogun Method, this is called the IRAE Model. (IRAE = Intrigue/Rapport/Attract/Enslave.)

It’s meant to be followed one stage at a time, without skipping a stage, all the way to Enslavement.

They don’t reach the Enslavement stage.

Most Pickup Artists only hit the Attraction stage, which ends with having sex with a woman. But beyond that, they have little (if anything) to offer.

That’s the reason why so many Pickup Artists are massive failures in exclusive, long-term relationships.

So that’s Step #1. You need to understand and accept the IRAE Model as the ONLY way to build a relationship with a woman.

But once you do accept the IRAE Model, then it’s time to take action.

So how do you enslave a woman emotionally?

How do you make a woman emotionally addicted to you for life?

Without a doubt, the fastest way to do it is with a Shogun Method technique called Fractionation.

Fractionation is a mind manipulation technique that uses storytelling to persuade women covertly.

It takes a woman into a “trance,” then snaps her out of it, then takes her into it again. It does this over and over.

Fractionation works by exploiting one of the most basic vulnerabilities in the female mind:

The weakness (and addiction) for emotional rollercoasters.

You see, when you take a woman on emotional rollercoasters, a few interesting things happen:

Fractionation may sound somewhat “exotic”, but the truth is that it is used everywhere.

For example, it’s Fractionation that’s at work when:

It’s the emotional rollercoasters these things give you that make them so addictive.

READ ALSO: How To Deal With Heartbreak

How To Enslave A Woman Using Fractionation

Guess what… women are even more vulnerable to emotional rollercoasters than you are.

And so it’s this same emotional rollercoaster that’s going to make YOUR woman addicted to YOU.

Here’s how I suggested Jay to use Fractionation to overcome his first rejection with Nicole:

That’s what you should do, too! If it worked for Jay, it WILL work for you.

The whole process can take a few days or a few weeks, but you’ll have your dream girlfriend at the end of it.

But here’s the kicker… you MUST learn Fractionation. It’s the ultimate key to your success.

You can discover how Fractionation can work its magic for you – join my Online Masterclass now:

Just because she rejected you once doesn’t mean it’s game over.

You just need to try again, and do things differently.

This time, you’ll need to:

Fractionation will help you do all that. So, this is what I want you to do right now: learn Fractionation and give it another shot!

On that page, enter your best email address so that I can email you the link to the Masterclass (if you qualify).

PS: Questions or comments? Leave me a message below and I will answer it.