How To Overcome Heartbreak Fast – Advice For Guys

Want to learn how to deal with heartbreak, rejection and betrayal?

Desperate for the best “how to deal with heartbreak depression” advice available anywhere?

You’re at the right place. I can help you… as long as you follow what I say here closely.

Heartbreak comes in many shapes and forms for guys. Two types of heartbreak are the most common:

Sometimes, heartbreak is easy to deal with if you can let go and move on…

…but it’s never that simple, right?

More often, the woman you lost was “The One.”

And you know what? If things were just a LITTLE different, she’d (still) be yours right now.

Rick & Gemma – A Case Study In Dealing With Heartbreak Depression

Such was the case with Rick, one of my Shogun Method students about a year ago.

He had just gone through a divorce with his wife, Gemma. He loved Gemma so much that he made the divorce as amicable as possible:

Cringey, I know. But that was his story.

Gemma then went on her merry way. Unfortunately for Rick, unlike Gemma, he couldn’t quite let go and move on. He just couldn’t get over someone he truly loved with all his life.

As soon as he learned Gemma had been seeing another guy, he broke down and begged me for help.

“I didn’t know how to make a relationship last. And I can’t stop thinking about her, Derek,” Rick sobbed to me. “I know I should ‘just fucking move on,’ as you’d say. But I just… can’t.”

I patted him on the shoulder and looked him in the eye. “Do you want Gemma back, Rick?”

Rick sighed and shrugged. “Well… I’m not sure if she still loves me, Derek… she really broke my heart.”

“That wasn’t my question,” I interrupted him. “Do you want her back?”

After a long moment’s hesitation, he answered: “Yes, Derek, I do want her back.”

READ ALSO: Toxic Relationships – Are You In One?

How To Deal With Heartache And Betrayal After A Breakup

Most inexperienced guys, like Rick, tend to believe the old saying:

“It takes two people to make a relationship work.”

But you know what?

It really is! How many times have you seen or heard about relationships where:

It happens all the time, right?

Here’s the bottom line: you have more POWER than you think.

That’s why it’s a mistake to think that to get her back, she should “still love you.”

If you want her back, you can brute-force your way into making her love you back. (You’ll learn how to do all this later in this article.)

That’s what I told Rick.

That’s what YOU should do, too.

If it’s still unclear to you, here are your options. If you’re heartbroken, you either:

How To Brute-Force Your Way To Getting Her Back

I told Rick that since there was another guy in Gemma’s life, he needed to take three steps.

And if you want to get your woman back too, you’ll need to take these steps, as well.

Let’s start with the first step…

Step #1: Re-establish Contact / Put Yourself In The Friend Zone.

Ideally, it’ll have been at least four weeks since your last contact.

If your last contact was pretty bad or embarrassing, then make it eight weeks.

But in any case, you’ll need at least a few weeks of zero contact between you. THEN you re-establish contact.

That way, you’ll give her a chance to forget the bad feelings and start missing you.

And when you re-establish contact, she’ll be at least curious enough to respond.

A good way to re-establish contact is to text her about something that adds value to her life.

For instance, if you know she’s a freelance designer who’s looking for clients, you can text her:

“Hey, how’s it going? I met someone from an animation group, and they’re looking for designers. I thought you might want to talk to her. Her name is ___ and her number is ___. Tell her I referred you. Anyway, I hope you’re doing fine. Ciao.”

But it’s even better if SHE texts YOU first. If the breakup was amicable enough, she’ll miss you within four weeks of zero contact.

She’ll probably text you to see how you’re doing. And when she does, be absolutely sure to do the following:

“Putting yourself in the friend-zone” may sound counter-productive, but bear with me here. Operating from her friend-zone has the following advantages:

In summary: the key is to simply get texting and talking again, this time as friends. That’s Step #1.

Step #2 is optional, by the way. If your girl isn’t seeing another guy, move straight to Step #3.

But if she IS seeing another guy, then Step #2 is clear. Get him out of the picture.

Remember what you learned earlier: the only two ways to deal with heartbreak is to either (1) get over it, or (2) get her back. And if you want to get her back, you can’t do it if there’s another guy in the way.

So, how do you take him out?

Simple – use my proprietary Boyfriend Destroyer technique on her.

The complete Boyfriend Destroyer technique is inside Shogun Method. Here’s a simplified version to get you started…

The first step is to get her to talk about him.

(Note: the more you’ve put yourself in her friend-zone in Step #1, the more openly she’ll tell you about her new guy.)

And if she REALLY trusts you as a friend, she’ll soon tell you about her new guy’s flaws.

The moment she starts complaining about her new guy, playfully ask her:

“Okay, let’s play a game. Imagine you were single again. What would your ideal man be like?”

Again, the more you’ve put yourself in her friend-zone, the more readily she’ll play your game.

“Hmm… my ideal boyfriend would be someone like Johnny Depp.”

“Okay, savvy,” you say. “Now imagine Johnny Depp walked into the room right now. What would you do?”

“That’s weak,” you joke. “How do you expect to win Johnny Depp like that?”

“Okay, okay – I’d probably flirt with him and seduce him…”

“What EXACTLY would you do?”

…and guess what? She’ll then automatically contrast the picture of the ideal man with her boyfriend.

Naturally, the boyfriend will fall short of the imagery of the ideal man in her mind, right?

And if you do this frequently, his flaws will be pretty much unbearable. Encourage her by telling her things like:

“Well, you only live once. Why settle for less?”

The results can be tremendously powerful:

And then, when you’re sure she likes you more than she likes the other guy, let her rant about her new guy one last time. And then you tell her:

“What the heck are you waiting for? Dump the guy already.”

And she will. She might dump him at that moment, or she might do it a few days later.

Believe me: if you played Step #2 right, she WILL dump him. It’s true.

And when this happens, congratulations – you’ve successfully moved the new guy out of the way.

Now with that bastard out of the picture, take the third Step. It’s time to win her back.

With a technique called Fractionation.

READ ALSO: Signs Your Ex Girlfriend Has Moved On

Step #3: Use Fractionation To Win Her Back… For Good

It’s a psychological manipulation technique that powers up the legendary Shogun Method.

Fractionation does one thing, and one thing only:

To make a woman addicted to a man emotionally. And for life.

When a woman is emotionally addicted to you, she’ll need you like she needs air to breathe. In other words, she’ll be enslaved to you emotionally. 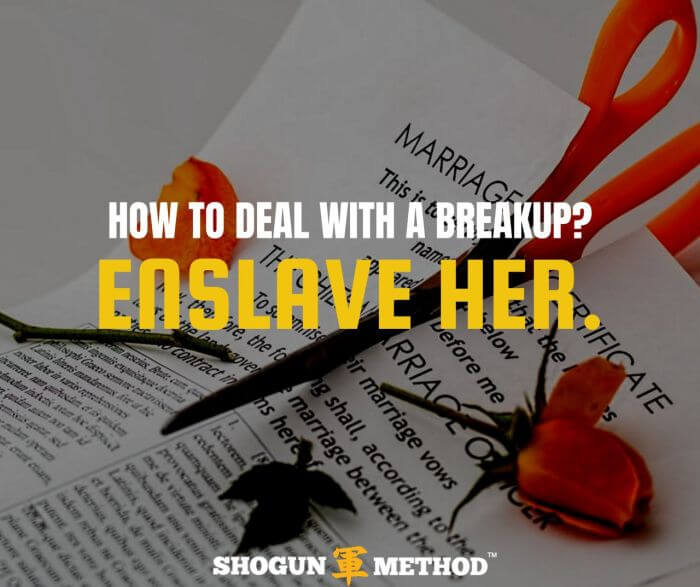 And NO, it’s not nearly as sinister as it sounds…

Fractionation has been used for decades. TV, movies, brands, and governments have used it to create loyal followings and raving fans.

This time, YOU’LL be using it too, only with a much nobler goal:

To save your relationship, to win your woman back, and to be happy together again.

And in case you forgot:

It does NOT take two. It just takes YOU.

Rick learned that, too.

…and he used Fractionation to “seal the deal” and win her back permanently.

Rick was shocked by the results. Gemma fell BACK in love with him, even MORE than before!

Today, they’re back together again. Gemma’s even asking to get re-married. Crazy but true.

Needless to say, Rick turned a hopeless situation into a happy ending.

And you can, too, if you have Fractionation (and a slew of Mind Control techniques) in your arsenal.

There are three steps to the process. You got to follow them in order. Very, very important.

And unless you master Fractionation, you’re hamstringing yourself. If you don’t take action, she’ll probably be living her life forever with that creep who took her from you.

So, make the smart choice and take this crucial first step:

I’m inviting you to take my online Fractionation Masterclass today. Sign up in the link below and take the Masterclass right now –

Want to get her back?

Willing to do whatever it takes?

So, take action now, or risk seeing another guy “seal the deal” with her.

Wishing you the best in love and life,

PS: Questions? Comments? Leave them below and I will answer them personally.