Starting A Long Distance Relationship? Or, Already In One?

Don’t take this the wrong way…

But getting into a long distance relationship is one of the dumbest things a guy can do.

Heck, it’s basically like slamming your nuts into a drawer over and over again.

(And if your relationship is going off the rails you’ll already know what I mean.)

Long distance relationships are notoriously tricky to pull off.

Long Distance Relationships 101: What You Need To Know

You know what… it’s perfectly understandable, though.

You love her and won’t let distance separate you.

It reminds me of my Shogun Method student Roger.

He was in one of those “Romeo and Juliet” type high school romances.

Then she got into UCLA…

But after a lot of fighting, arguing and crying they decided to stay together.

They were going to, ahem, “make it work.”

He kissed her goodbye and she went off to college.

Two years go by and the poor schmuck turns down every girl that hits on him.

So one Thanksgiving he’s getting ready to fly out and see her.

But the day before his flight she calls up and tearfully dumps him.

Turns out she cheated since almost the first day of college.

But now SHE couldn’t take the guilt anymore and needed to end things.

The experience devastated Roger and affected him for years.

And these were the mistakes that he made:

Most long distance relationships fail. For a wide variety of reasons.

And make no mistake…

There’s no way of knowing what will happen.

Will you make it or wind up as just another casualty?

It doesn’t matter if she’s going off to college.

Or has a six-month assignment in Italy.

Or she’s volunteered to work at some overseas charity.

Or going backpacking around the world to, “find herself.”

For whatever reason she’s a thousand miles away and surrounded by temptation.

It doesn’t matter how loyal she is…

…there are only so many times a woman can say, “I have a boyfriend.”

Worst part is you’ll never know unless she tells you.

(Which will most likely be when you’re breaking up.)

No, women will usually rationalize.

“It was only once and won’t happen again.”

But then it does… over and over.

Meanwhile you’re sitting at home on a Saturday night waiting for her to call you.

Unbelievably, a lot of women do this on purpose.

They think nothing of stringing along some hapless guy.

…and goes home to her boyfriend over the holidays.

Look… if your long distance relationship isn’t working here’s something that might help you.

This isn’t your standard “Dating Guru” gimmick… or something you read in Cosmo or see on Oprah.

To keep her interested you need something stronger than cheesy, “dating advice.”

What I’m about to show you is like nothing you’ve seen before.

When used correctly this technique makes her fall hopelessly in love with you.

Your girlfriend will rush back home to call you every night…

Make plans to get together as soon as possible…

Jump into your arms when you meet again…

And rip off your clothes the moment you’re alone.

READ ALSO: How To Be Attractive To Women

Warning: Proceed With Your Eyes Open

You see, you may not know this but…

My methods are reverse engineered from sociopaths, narcissists, con men and cult leaders.

(You know, the type of people who can get anyone to do anything.)

I spent years studying how they operate…

…then repurposed their techniques for romance and seduction.

This is why unlike conventional wussy dating advice this stuff actually works.

But it does take balls to pull off.

These are “dark psychology” techniques and a lot of guys don’t have the stomach for it.

Take the Fake Breakup technique. A lot of guys tell me it sounds, “Manipulative” and even a little, “Unethical.”

But when done correctly it can make your girlfriend fall madly back in love with you.

The core philosophy of the Shogun Method is that you MUST exploit a woman’s emotions to your advantage.

So, yes, it’s manipulative. It’s “dark”. But most importantly, it works.

And notice how different it is to your standard “Pickup Artist” (PUA) and conventional “Dating Guru” advice.

The Fake Breakup technique perfectly demonstrates this philosophy and involves these two steps. Let’s dive in!

As the name implies you’re going to pretend to dump her.

Call your girlfriend up and start talking about your relationship.

Out of the blue tell her that…

“This isn’t working for me…”

“Maybe we should start seeing other people…”

“Don’t hold yourself back from meeting someone new…”

The idea is to make it seem like you want to break up with her.

If done right this should take her completely by surprise. (And that’s what you want.)

Think the relationship is about to end…

She’s going to cry and go crazy and want to know why you’re breaking up with her.

And guess what: the more emotional she gets, the better it will be for you. Because it’s this emotional vulnerability that you’re going to exploit…

…and use to make her yours FOREVER.

And when she’s most emotionally vulnerable, you proceed to take the second step…

Step #2: Use Fractionation On Her.

At this point she’ll be crying and want to know what’s going on.

Because you only need meet her once to create mental Enslavement and obedience.

Tell her OK you’ll meet, but don’t immediately agree. Be reluctant about it.

Now, when you see her in person you’re going to use something called Fractionation.

This is a hypnotic / NLP seduction technique that can make a woman become emotionally enslaved to you in minutes.

Putting someone in trance creates a strange bond between you and them.

It’s not something that can be easily explained.

And can only be described as a type of emotional addiction…

…which makes the woman fall deeply and completely in love with you. 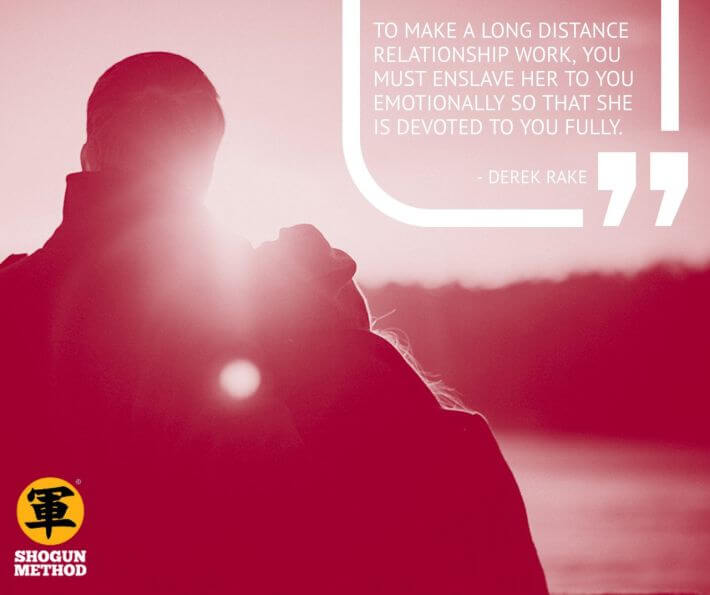 The strangest thing is, this bond is permanent and not easily undone.

Which is perfect if you’re in a long distance relationship.

How To Use Fractionation To Control And Dominate A Woman

All that Fractionation involves is telling simple stories.

And even better… a skill that can be learned in minutes. It’s true.

What’s more, it works on any women (not just your girlfriend). It’s universal.

And once you’ve seen how effective it is…

…you’ll be optimistic about your long distance relationship again. Believe me.

To help you get started I’ve recorded an Online Masterclass which explains Fractionation (and other Mind Control techniques) in depth.

If your relationship is going sideways then do yourself a favor and watch it now.

…and only THEN realizes how stupid he was.

Don’t let her play you for a fool.

Fractionation can help you avoid this.

And it will secure her devotion to you despite being thousands of miles away.

Enter your best email and then check your inbox for the Invite.

PS: Questions or comments? Leave them below.