Are you an older guy – say in your 30’s or better – who’s making a comeback in the pickup game?

If any of that hits home, then you’re in the same boat as Nick.

Let me tell you Nick’s story… and learn how to pick up women once again.

Getting Back Into The Game: Nick’s Story

Nick is a father of four in his 30’s. He recently recovered from a divorce and wanted to start dating again.

Unfortunately, he felt rusty and insecure. He felt women would laugh at him for being the “creepy old guy.”

And so, Nick came to me for help.

This Shogun Method guide outlines everything I taught him. It’s all about how you, too, can not only survive the dating game…

…but even become the man that most women want so DESPERATELY to meet.

You’ll learn how to make a woman want you despite whatever shortcomings that you have (perceived or real).

Let’s start out with something you’ll want to hear…

Why You Have An Advantage Over Younger Men

First of all, know this:

It’s NATURAL to feel out of your element if you haven’t been dating for a while.

After all, the dating game doesn’t stay the same. It changes and evolves… like the people who play it.

But that shouldn’t worry you. Because you have some ADVANTAGES over younger guys, at least in two MAJOR wats:

And that’s not all…

You know, the stuff that you read inside seedy online forums and dubious blogs.

And yet, most of them absolutely SUCK with women.

Instead of helping them, Pickup Artist tricks are SABOTAGING them.

Without exception, all the strongest, happiest, longest-lasting couples go through four “stages of love“:

This is otherwise known as the IRAE Model (IRAE = Intrigue, Rapport, Attraction, Enslavement). It sits at the core of Shogun Method (which you’ll find out about later.)

The best relationships go through each stage, one stage at a time, and in sequence. This means that they don’t skip a stage, and they all make it past the last stage (Enslavement).

Most PUA tricks only cover the first step: Intrigue. It’s all about getting women interested in you. That’s it.

You might be aware that in most cases, Pickup Artists can’t do even THAT right. It’s true.

…or some other over-the-top, awkward, scripted pickup lines.

I mean – seriously? You want to win women over with that dumb shit?

The sad thing is this. Most (younger) guys who follow this advice DON’T know that they’re actually:

But YOU know. And you’re going to avoid making those dumb mistakes. That’s going to be your advantage over younger, clueless guys.

When you know what to do, the women you meet for the first time won’t care about your age. All they’ll care about is that they finally found a guy who “gets it.”

And they’ll do everything they can to keep you!

Also, remember that it’s not enough to get a woman interested. You’ve got to know how to keep her interested for the long-term. Makes sense, right?

Today, you’ll learn about how to move your relationship with a woman through all four stages: Intrigue, Rapport, Attraction, Enslavement.

For now, let’s focus on the first stage: Intrigue.

READ ALSO: How To Be Attractive To Women

How To Pick Up Women (The Right Way)

Let me tell you why Shogun Method works where the vast majority of PUA schools fail.

And no, I don’t mean the wacky Hollywood kind.

This is as legitimate as it gets.

Make no mistake… REAL hypnosis is nothing like the “you’re getting sleepy” kind you see on TV.

To keep things simple, think of it this way:

REAL hypnosis is really nothing more than a heightened sense of relaxation.

When people are in that sense of relaxation:

The technique you’re about to learn is designed to put women under this state of relaxation. And it all happens within the first few minutes of meeting her, if not seconds. 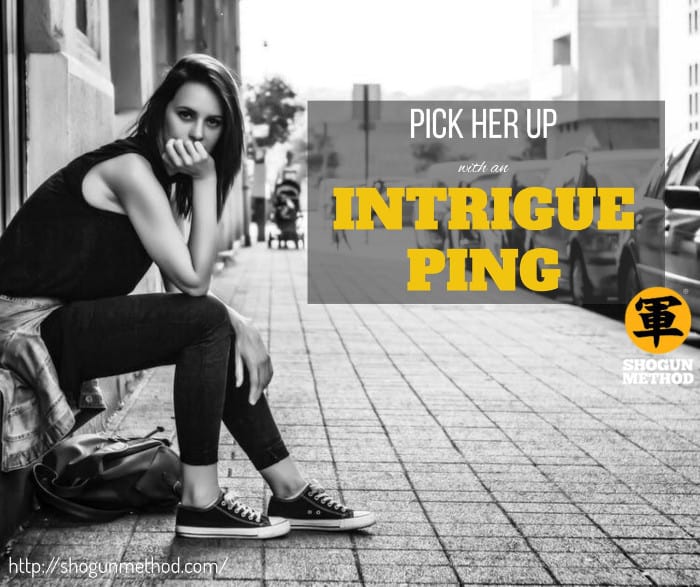 The technique is called the Intrigue Ping, and here’s how it works:

To use Intrigue Pings, you’ll need to tailor your spoken line to the situation. What you’d say to a woman in a bookshop will be different from what you’d say to her in a bar, right?

Nick was a guy who liked going to coffee shops, parties, and bars. So here are some Intrigue Pings I gave him to get him started:

All the Intrigue Pings are meant to catch a woman’s attention (By making her say “What?” or “Yes” in the middle). And they’re all meant to lead to a fun (and natural) conversation.

What Happened To Nick?

Nick had a blast using Intrigue Pings. He told me they worked so well that they became the usual way he opened conversations with women.

He also told me that most of the women he “Pinged” eventually became his friends.

And later on, one – a beautiful 24-year-old named Joan – became his fiancée.

How did he do it?

Intrigue Pings definitely helped him. And guess what? They’ll help you, too. Believe it.

But here’s the kicker… Intrigue Pings are NOT enough. After all, Intrigue is just one stage of the process. There are three more stages: Rapport, Attraction, and Enslavement.

How did Nick take his relationship with Joan all the way past the Enslavement stage?

The same way YOU’LL pick up and date women from now on, no matter how old you get.

You learn how to do that next…

READ ALSO: How To Get Out Of The Friend Zone (With The VAKSOG Modes Tactic)

Beyond Pickup: It’s All About Enslavement

Intrigue Pings, and all the other techniques in Shogun Method, are based on ONE technique.

That “Mother Of All Mind Control Techniques” is Fractionation.

Don’t be fazed, though… because Fractionation can be rather simple to learn (and use).

It’s basically a storytelling technique. With it, you will tell your woman stories that will put her on emotional rollercoasters.

Emotional rollercoasters put women in a mild state of hypnosis. And remember, hypnosis is that state of relaxation where they’re more open to liking you and trusting you.

So, with Fractionation you’ll get a woman to like and trust you. It’s that easy.

And guess what? The best Intrigue Pings use Fractionation, which is why they work so well.

But that’s not all…

Remember the IRAE Model? Fractionation will move your relationship with a woman through the four IRAE stages.

It’s Fractionation that will:

Remember: it’s all about Enslavement, not “pickup”. Enslavement is the end goal.

And Fractionation will get you to your end goal.

Now here’s the best part of all…

You can learn and master Fractionation RIGHT NOW.

All you’ll need to do is to join my Online Masterclass by clicking the link below:

(After you click that link, a signup page will appear. There, enter your best email address so that I can email you your Invite to the Masterclass.)

We all get older. You can’t escape it, right?

Here’s some consoling thoughts, though. Like Nick (and the tens of thousands of my other Shogun Method clients), you can still play the dating game.

And as you’ve just learned, you can play the game EVEN BETTER than the younger guys.

But here’s the catch… you MUST learn Fractionation. It’s not an option if you want to succeed with women.

PS: Questions or comments? Leave them below and I will answer them personally.