Well, I got to first commend you for your fine taste.

…some women DO get better with age. Just like, you know, fine wine. 🙂

In this Shogun Method guide, you’ll learn everything about dating older women and making these luscious cougars fall in love with you.

However, before we start, there’s one thing you need to know –

If you’re looking to attract a married woman, then there’s a specialized Shogun Method guide for that – click here.

Benefits Of Dating An Older Woman

Of course, this goes without saying –

There are many differences between older and younger women. Which is why dating a mature woman comes with certain benefits (that younger women can’t give you.)

…and do things younger women won’t.

(It’s not like you’re with a 20-something who thinks it’s enough to lie back and spread her legs.)

Not only that, older women are often far more enthusiastic and eager.

…and wants to finally experience being with another man.

Or, a woman who wants to get revenge on her ex…

…by having her brains fucked out.

Whatever the reason, sex with an older woman can often be far more exciting and satisfying.

READ ALSO: How To Be A Player (Without Turning Into A Lame Pickup Artist)

Benefit #2. She’s not looking for a serious relationship.

The reality is that many older women aren’t looking for commitment.

They want to keep it casual and have fun before it’s too late.

Or still in love with her ex or has kids.

Whatever the reason she wants something simple and uncomplicated.

(Which is also why older women are more likely to engage in a “Friends With Benefits” relationship.)

Better than this, an older woman won’t force you to get married and have kids.

And you WON’T have to meet her parents. That’s a HUGE bonus, right?

Benefit #3. Older women have their shit together.

What I mean is they have MONEY.

And this is an important point for guys who are sick of paying for EVERYTHING.

You have to pay for dinner, drinks, movies, vacations, gifts and more.

The list is endless, and because of that, dating can be god damn EXPENSIVE.

And guess what? Older women are more than capable of paying for themselves.

Heck, if you’re lucky you might even find yourself a sugar mommy.

(And with what you’re about to learn this is more than possible.)

Benefit #4. They take care of themselves.

Older women know they have to put in the effort to stay attractive.

Because of this they work out, eat right, dress better and do whatever it takes to look good.

(Perhaps this is driven by their insecurity due to their age.)

How about younger women? Well, they are more than happy to coast by on their looks.

And for some guys, personality is far more important.

But this is yet another reason to date older women.

You see, as women get older they lose their looks and become humble.

They grow up and start to mature…

Become pleasant to be around…

…and unlike younger women, they have stopped giving men crap for no reason.

Which is why the biggest advantage of dating an older woman is their maturity.

And if you’re more concerned about personality than looks…

Or sick and tired of bratty and entitled 20-something’s…

…you should be dating mature women!

Before you start chasing cougars here’s what you MUST know…

Dating older women can be a fucking minefield.

Besides the age gap they often have HEAVY emotional baggage.

What’s more, most of them have seen every trick in the book (And more than once.)

Remember… they have tons more experience with men and relationships than the typical 20-year-old.

The point I’m trying to make is this:

To an older woman PUA crap is so painfully transparent it’s downright insulting.

And unless you want her laughing in your face you need to avoid using those “opener routines”.

To break through her defenses you need something stronger…

How To Seduce A Cougar Using Mind Control

Calm down. Understand – this isn’t some bogus mumbo jumbo spewed by some conspiracy theory nut job.

What Mind Control Really Is

When I talk about, “Mind Control” what I really mean is this…

You need to control what she thinks and feels.

It’s the science of influencing her thoughts in order to manipulate her emotions.

Putting her emotions under your control is your ultimate goal.

Here’s how: you need to give her a series of emotional highs and lows. In short, you’ve got to put her on an emotional rollercoaster.

Guess what? Mature women are hopelessly addicted to emotional rollercoasters.

It’s why they watch retarded hospital dramas and soap operas.

And why sexual tension-laden books like “50 Shades Of Grey” sell by the MILLIONS.

They can’t live without it!

Not only that, a women’s emotions are what make her fall in love.

They want bad boys who put them on an emotional rollercoaster.

So, all you’re really doing is giving her what she wants, right?

READ ALSO: Barnum Effect – How To Induce It Inside A Woman’s Mind

As a woman gets older, her addiction to emotional turmoil gets worse.

There is a second reason why emotional and mind manipulation can be wickedly, wickedly effective… especially among older women!

This makes them extra vulnerable to emotional manipulation.

It sounds sad… and yet it’s true.

And depending on her relationship history she could have brains like scrambled egg.

Think about the stripper in her 40’s…

…or the woman on her third divorce.

…or the burned-out career woman who wished she got married.

They NEED and CRAVE the emotional rollercoaster of highs and lows.

What’s more, they enjoy it!

(In fact, most of the time they’re practically begging for it.) 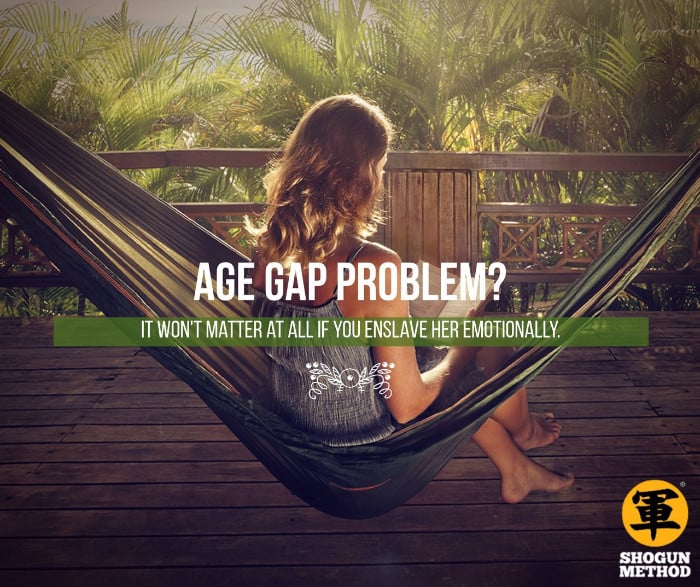 How To Attract Older Women – Use Fractionation!

With this proprietary Mind Control technique, you can bend an older woman to your will… and make her forget that the age gap even exists.

This method also creates a powerful emotional addiction to you… which is so strong it’s almost as if you’ve enslaved her.

To help you learn Fractionation, I’ve recorded an Online Masterclass which you can join here:

Click Here For My Online Masterclass On Mind Control

After you clicked the link, a new page comes up. There, enter your email address so that I can send you the Invite.

(Not everyone qualifies. And that’s why I need your email address.)

Do that, learn Fractionation and use it…

…and before you know it, you’ll have a sexy, older woman in your arms.

Remember! Like fine wine, they only get better with age.

Additionally, there are many differences between older and younger women…

…which makes this a unique experience every guy should try at least once.

And hey, the divorce rate is higher than ever.

Which means there are more and more cougars and MILF’s on the prowl.

And Fractionation will get them purring in seconds.

PS: Questions or comments? Leave them below.